With temperatures soaring to uncomfortable degrees, it’s been an unforgettable week for all the wrong reasons.

It’s been a good time to stay indoors and play games then, especially with Creative Assembly launching A Total War Saga: Troy for free on Epic Store Games. There’s also been some not-so-good news on the gaming front, with Apple and Google pulling Fortnite from their respective app stores after Epic Games breached the rules.

But who are the main winners and losers of the week? Scroll down to find out. 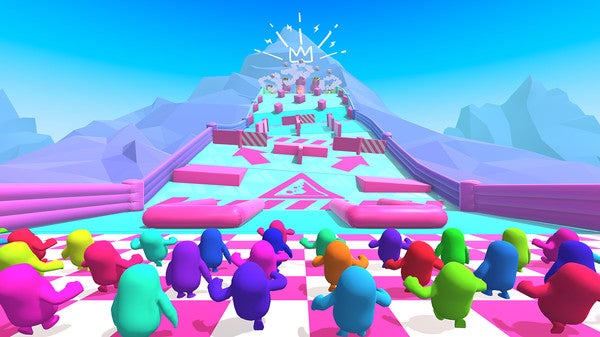 It’s common knowledge that the battle royale format is resoundingly successful, with the likes of Fortnite, Apex Legends and Call of Duty: Warzone all proving massive hits. And yet it was still a delightful shock to see Mediatonic’s zany jelly-bean take on the genre rise to prominence.

Rather than gunning down foes to become the last one standing, Fall Guys: Ultimate Knockdown sees you compete with 59 players in a Takeshi Castle style gameshow, with customisable jelly bean characters jumping over obstacles, chasing oversized footballs and avoiding avalanches of bouncing fruit.

The premise of Fall Guys no doubt sounds enticing, but few expected it to draw in as many players as it has. Publisher Devolver Digital has confirmed Fall Guys has made at least 2 million sales on Steam alone. And with PlayStation giving it away as part of this month’s PS Plus freebie, the total player account will likely be much, much higher.

Things only look to get better for Fall Guys players following the promise of new mini-games and customisation options arriving in future seasonal updates. And with Fall Guys proving to be so popular, we reckon it’s likely it will eventually arrive on Xbox and Switch so even more gamers can join in on the jelly bean mayhem.

Video game delays are hardly rare, and they should always be welcomed if it means developers are granted more time to ensure the best possible end product. That said, there’s no denying the scale of Halo Infinite’s delay, with the Xbox Series X losing its biggest launch exclusive.

With little seemingly separating the PlayStation 5 and Xbox Series X consoles ahead of launch, Halo Infinite was arguably Microsoft’s biggest ace card for luring gamers over to team green. With Halo Infinite now delayed to 2021, Xbox’s exclusive launch lineup now looks to be made up of The Medium, Scorn, Tetris Effect: Connected and Yakuza: Like A Dragon – it would be a struggle to call any of these titles potential ‘system sellers’.

Over on the blue side, it’s been confirmed that Marvel’s Spider-Man: Miles Morales will launch alongside the PS5. This won’t be a full-length adventure like the original, but that likely won’t deter fans. Death Loop has also been confirmed as a timed exclusive, although it’s unclear whether it will launch alongside the PS5 at the time of writing. If you’re judging the next-gen consoles solely on launch games, it’s safe to say the PS5 has the advantage.

That all said, those desperate to play Halo won’t necessarily switch to PlayStation just because they have to wait longer than expected. And history tells us that launch games aren’t that influential on eventual hardware sales. For example, the only notable exclusive PS4 launch games were Resogun, Killzone Shadowfall and Knack, yet the console went on to sell over 110 million units.

So the Halo Infinite delay is unlikely to be a knockout blow for the Xbox Series X, but Microsoft will no doubt be cursing its luck as it heads into a contest where every advantage counts.