The Windows 8.1 October release date is here. Find out about the new Windows features to look out for including the returning Start button.

Microsoft launched its Windows 8 operating system in October 2012 with high hopes of gaining lost ground on Apple and Google. It made its way onto Windows 8 laptops, tablets, laptops/tablet hybrids and desktops.

The tablet-friendly OS has not been without its issues and bugs. Windows 8 RT underwhelmed and Microsoft’s decision to ditch the Home button alienated the hard-core PC crowd.

Microsoft’s Windows 8.1 update hopes to iron out some of the flaws and win back some friends and it’s a free download from the Windows Store.

The Microsoft Surface Pro 2 will be among one of the first Windows 8.1-running devices while the Toshiba Encore will be one of the first 8-inch tablets to benefit from the small screen support added in the latest update.

Here are our picks of the best news Windows 8.1 features.

After leaving it out from the first incarnation of Windows 8, the Start button is back. Well, kind of. It returns to the bottom left hand corner of the Desktop mode, but clicking the icon works merely as a shortcut back to the tiled-interface as opposed to accessing the application launched as it has done in previous Windows operating systems.

So it’s a small change, but a good one considering how awkward to use the ‘hot corner’ method Windows 8 currently employs. And while some may still not fancy the tiled start screen, it’s worth persevering with. It is an improvement on the poky start menu from Windows 7 and the Windows Store is slowly attracting more apps.

If you an ardent hater of the ‘metro’ start screen, however, there are plenty of third-party solutions. One of our favourites is Pokki. 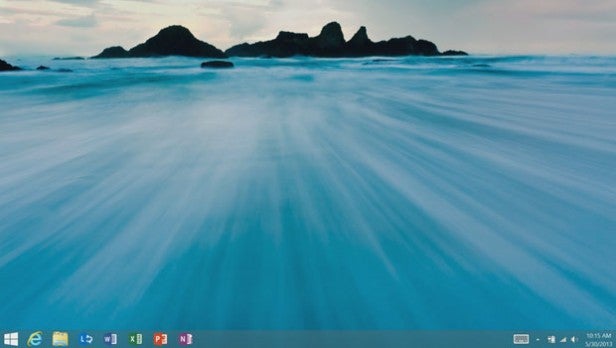 For Windows 8 laptop and desktop users,
the inability to jump straight into the more traditional Windows
Desktop is a great source of frustration. Thankfully Microsoft has
addressed this and has now added the ability to choose whether you want
to start at the tile-based screen or the Desktop screen first. We kind of understand why this wasn’t in the original release, but it’s the right move on Microsoft’s part.

Windows 8.1 lets you give the desktop and tiled interface a more personal feel by introducing support for parallax (motion) wallpapers and adding more colourful themes.

Additionally, Tiles can now be resized to be extra small or extra live depending on how frequently you access them. You can also remove Tiles from the Start screen and have the ability to turn off Live Tiles.

The smaller live tiles are important because it’s one of the features that should allow Windows to support smaller tablets.

As well as having the added ability to manage printing jobs, Microsoft is also adding the ability for developers to add 3D printing support for applications. That means you’ll be able to print 3D models directly from programs. The functionality has the support of the major 3D printer manufacturers including Makerbot and Form Labs who already produce desktop 3D printers.

Wi-Fi Direct and NFC printing support has also been added. This means that if you have an NFC-enabled printer and Windows 8 device you can simply tap the two together to pair and print.

An area Microsoft will be eager to improve, Windows 8.1 will come with a
series of pre-installed apps all accessible from the Start screen. Internet Explorer,
Bing and SkyDrive are among the usual suspects. You can also support for
Outlook.com and the Outlook desktop client and you can choose the default apps for browsing, emails, music and more.

The biggest news on the
Windows 8.1 app front is that Microsoft has confirmed Skype will replace
Microsoft’s Windows 8 Messaging app. It’ll now become the go-to service
for video, voice and instant messaging communication.

Microsoft has also taken the opportunity to refine and adjust existing native Windows 8.1 apps to make them slicker and add extra functionality and in its own words, ‘put creativity in your hands’. 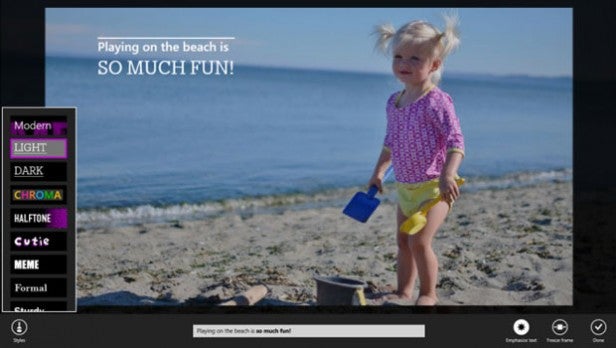 The camera app now let’s you take photos when you are shooting video, the ability to rewind photos BlackBerry 10-style and take panorama pics using Microsoft Photosynth. In the process of the changes, Microsoft has decided to drop built-in Facebook and Flickr support.

The new Movie Moments app is a very simplified video editing app where you can trim footage, add music, text and special effects.

Microsoft has also been busy making its own apps that include something for foodies and fitness-lovers. The Food & Drink app, powered by Bing, pulls in 100,000 new recipes, a wine encyclopaedia and plenty of culinary tips.

The Health & Fitness app provides insight into exercise routines, nutrition and includes a symptom tracker. Other notable new apps include a Reading List, which saves articles that can be read later on, and the more straightforward sounding Alarms, Sound Recorder and Calculator. 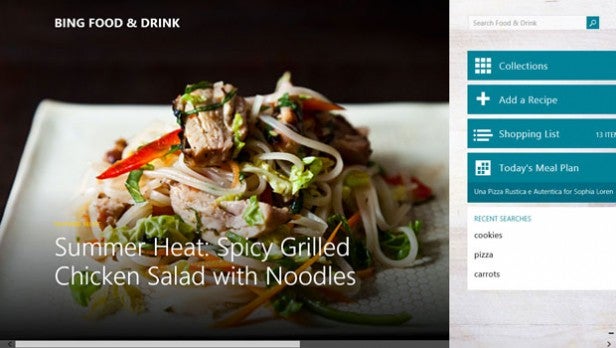 If you want to liven up your Lock Screen, Windows 8.1 now lets you add a photo slide show (Android 4.1 Jelly Bean Daydream anyone?) but also more useful features like the ability to access the camera without unlocking. This lets you take pictures quickly, as well as accept voice and video calls without faffing around.

Bored of the static landscape shot? You can now personalise your Start Screen using the new Motion Accents that allow you to add live backgrounds.

Having two applications open at once was
already possible on the first version of Windows 8. The latest update
now allows you to open those windows side by side with a more even 50/50 split. It will also let you
have up to four apps open on one screen, adding the ability to alter
the size of the applications if you are trying to focus on one more than
the others. 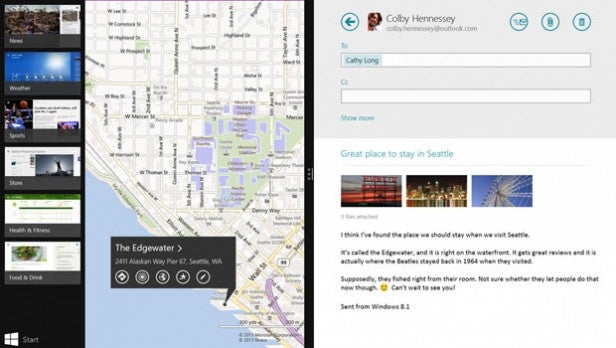 Making search work more comprehensively across hardware, the web and cloud storage, the Bing-powered search has been refined in Windows 8.1. It now lets you search everything on your device, from Windows 8 apps and information hidden inside Microsoft Word documents, to content nestling inside your more deeply integrated SkyDrive account.

Search results will present images, video and other content related to your query with preview thumbnails for related web links. Another handy new search feature is the ability to search for text within photos in SkyDrive.

A feature that is perhaps more geared towards James Bond or business folk using Windows 8 is the additional layer of enterprise-grade security that now has biometric authentication enabled. You can now use fingerprint technology to protect important data and files that you don’t want to fall into the wrong hands, so expect to see a load more tablets and laptops with scanners on them.

So that’s our pick of the best Windows 8.1 features. While you could argue many of these should have been in the orignal release, there’s no doubting there’s plenty of useful additions that will make Windows 8 significantly better to use.

We will have a full Windows 8.1 review soon, but for those who have already had a play let us know what you make of it in the comments section below.