DEBATE: The case for and against Nvidia’s new Android console

Nvidia has just revealed the latest chapter in its Shield story and it’s caused quite a stir. Its vision, the Shield Console, is of outstanding 3D graphics, seamless cloud game streaming at 1080p and 60fps and 4K video playback all in one, svelte $199 (approx. £130) box.

Powered by its insanely powerful Tegra X1 processor and the new Android TV platform, it takes aim at Sony, Microsoft, Apple, Amazon and numerous other established names. It’s a bold and tantalizing prospect.

Here we look at the arguments for and against the Nvidia Shield being a landmark product in the future of gaming.

Let us know which side you’re on in the comments. 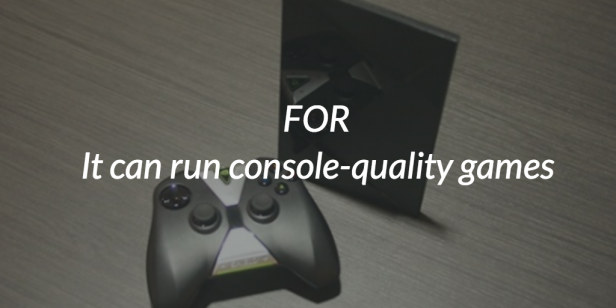 Previous Android micro consoles have been a bit spotty when it comes to visual quality, but the Shield Console is different. Nvidia has demonstrated that it is capable of handling titles like Doom 3: BFG Edition, Resident Evil 5, Borderlands: The Pre-Sequel and – perhaps most impressive of all – the PC-punishing Crysis 3.

There’s clearly a lot of power under the bonnet here – more so than has ever been on offer to Android developers in the past. This is an opportunity for mobile developers to expand into a new market: the living room. We’ve been waiting for Apple to make such a move for years, but it’s taken a gaming company like Nvidia to make it happen. It’s an opportunity we hope they’ll take seriously. 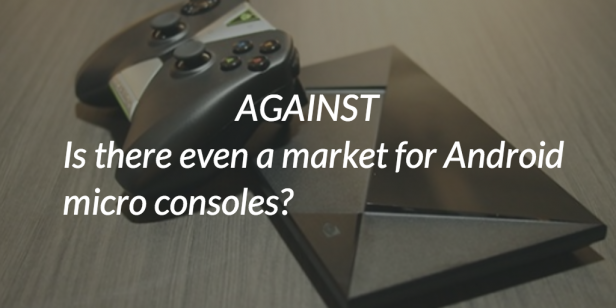 It’s not as if the Shield Console is an entirely new concept – we’ve seen several other similar efforts fall by the wayside in recent years. Ouya was a crowd-funding phenomenon that looked set to disrupt the domestic gaming market, yet it sold poorly and its Tegra 3 chip is now woefully inadequate for playing modern Android titles.

That was followed by the equally dismal GameStick and Mad Catz M.O.J.O., neither of which gained any traction. Even Nvidia’s previous Shield products have enjoyed a somewhat muted response from gamers – while promising, they’ve hardly sold in the kind of quantities that will trouble the established gaming companies. No one really seems sure that there’s even an audience for this kind of product, even if Nvidia’s name and technology makes this a more serious prospect than those that came before it. 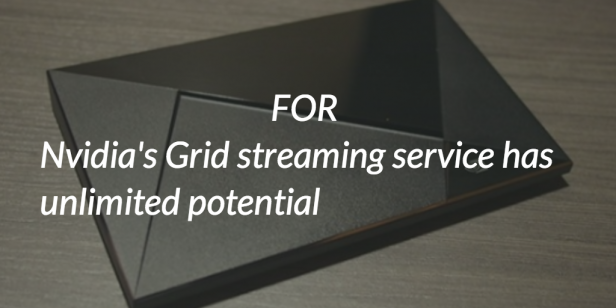 Cloud gaming is a wonderful idea in principle and could well represent the future of gaming. Why spend money to upgrade your system every few years when all of the processing can be done ‘in the cloud’?

Looking at it from that perspective, the Shield console has the potential to be the only system you ever need – with 1080p, 60fps game streaming on offer, all the unit has to do is beam the action to your TV, with Nvidia’s banks of servers doing all the hard graphical work. Add to this a potentially massive pool of games to choose from – all supported by the Netflix-style monthly subscription service – and the Shield Console may well usurp your Xbox One or PS4 overnight.

This service is already in testing on the Nvidia Shield Portable and Nvidia Shield Tablet – previous members of the Shield family – but will launch officially alongside the Shield Console this May. To cap it all off, users will be able to purchase new titles like The Witcher 3: Wild Hunt and Batman: Arkham Knight via Grid and receive a Steam code, which they can then redeem on their PC, offering the best of both worlds. 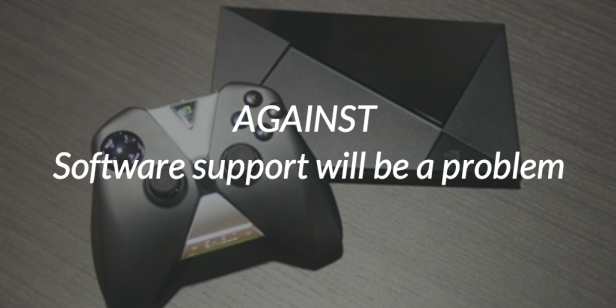 One of the key issues is that the vast majority of Android games aren’t built with Shield tech in mind. Fifty optimised titles are expected to launch alongside the Shield in May, but we’re willing to bet that many of these will merely by existing Android games that have been hastily retrofitted with support for the Shield’s.

While the company has done well to persuade the likes of id Software and Capcom to support the Shield Console at launch, it remains to be seen if these same companies will continue to pour valuable investment into a system that has a tiny user base when compared to the Xbox One and PS4 – or even the standard Android smartphone and tablet market. 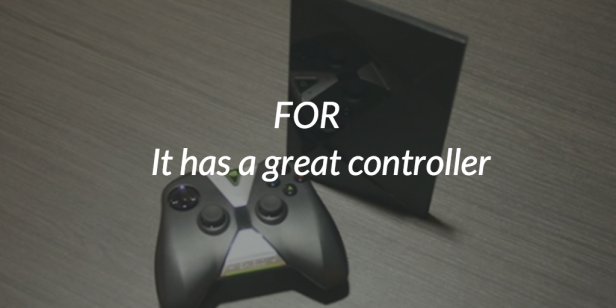 The controller that ships with the Shield Console isn’t new – it launched alongside the Shield Tablet last year and also works with the Shield Portable when it’s in TV mode. Still, an entirely new pad wasn’t needed, as the Shield Controller offers the kind of build quality and ergonomics you’d normally expect from Microsoft, Sony or Nintendo.

It feels a lot like the Xbox 360 pad – one of the best in the history of gaming – but comes equipped with a superior D-pad and an internal rechargeable battery as standard. It’s possible to pair up to four pads with the Shield Console, and the process is as simple as holding down the green Shield button when standing near the system. Games consoles live or die by the quality of their interface, and in this respect Nvidia is well and truly sorted. 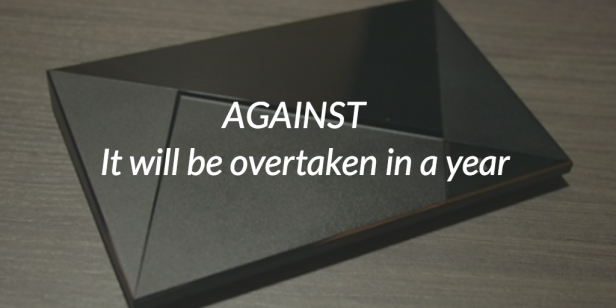 The Shield Console is based on Nvidia’s mobile tech, and that means it will be surpassed within a year. That’s just the way the company does things – it’s following the pace of the smartphone and tablet industry, where new tech is pushed out on a yearly basis. The Shield Portable used Tegra 4, while the Shield Tablet gas Tegra K1. The Shield console is the first powered byTegra X1, and in 12 month’s time we’ll no doubt be talking about the next Shield product, which will almost certainly showcase Nvidia’s latest processor.

Progress is fine and dandy, but with a yearly update cycle the Shield Console won’t have time to build an audience. Think about it like this: the Xbox One and PS4 have only just completed their first year on the market and have many, many more ahead of them, but after 12 months the Shield Console will already have been overtaken by its successor. That’s a turn-off for both consumers and developers alike – why support a system that is out of date so quickly?

Related: Nvidia Tegra X1: What you need to know 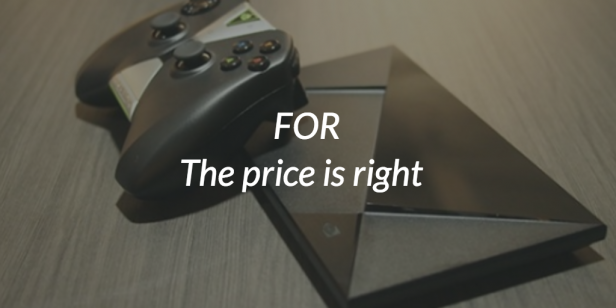 The $199 price tag is pretty impressive when you consider what you’re getting here – not only is the Shield Console a formidable gaming platform, it also offers the benefits of Android TV and is capable of 4K video playback.

Granted, it’s not as powerful as the next-gen Xbox One and PS4, but it’s smaller and more compact, making it the ideal system for those who aren’t quite ready to stump up the cash for Sony and Microsoft’s systems. Moreover, in future, Nvidia Grid could match next-gen consoles for fidelity, and the low entry price makes regular upgrades more palatable. 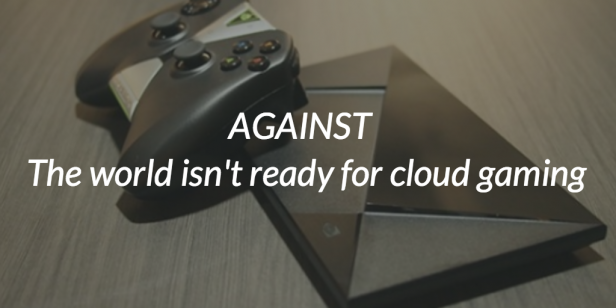 The Grid platform is also something we’ve seen before, albeit in a slightly less impressive form. OnLive launched back in 2010 and while it’s still clinging on for dear life, the service’s subscriber base is small and performance is blighted by problems with lag and image quality.

Sony has its own cloud streaming service too – powered by one-time OnLive rival Gaikai – so Nvidia certainly doesn’t have this section of the market all to itself. But at the moment the average home broadband connection is simply too slow to make it a viable reality.

We’ve been testing Grid on our Shield Tablet on a typical 20Mb home connection and while it’s easily as good – if not better – than OnLive, there are still enough irksome issues to make it feel like a second-class experience when compared to running the game on a proper console or PC.

Related: What is PlayStation Now? A guide to Sony’s streaming service 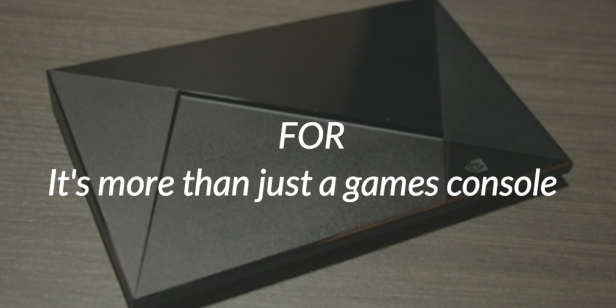 Set top boxes like Amazon Fire TV and Apple TV prove there’s a growing demand for “smart” devices on our televisions – many TV sets even come with such functionality built in. The fact it will stream 4K video is hugely significant as there are few rivals that can just now.

With Amazon, Apple and Google fighting it out to be the streaming platform of choice, and Netflix along for the ride, the Shield Console could be the device that puts Android TV at the forefront. Better still, Nvidia’s offering has something no rival Anrdoid TV box can match – a serious gaming platform supported by a serious name in gaming. 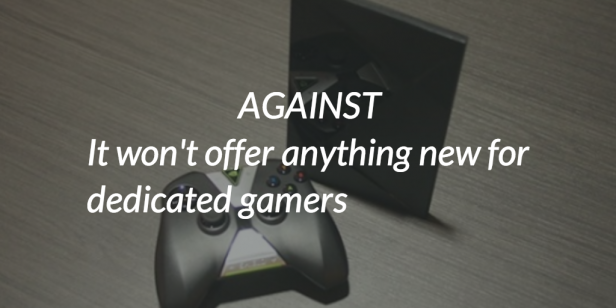 Being able to stream amazing new games to your TV will be brilliant, and we like the idea of giving people a free Steam code with Grid purchases so they can enjoy it on their PC. But therein lies a problem – why would you play a game on your TV if you have a gaming PC in the house? And if you’re the kind of person who is genuinely excited about games like The Witcher 3 and Batman: Arkham Knight, there’s a pretty good chance you’ve already bought a dedicated games console in order to play them – why would you bother with the Shield Console?

The Shield console needs to offer an experience that’s as good, or superior, to playing on PC or console, and then it needs software that attracts people to using it. Perhaps Nvidia will land on the right formula in time, but so could any one of Sony, Microsoft, Valve and plenty of others. However it fares, Nvidia should be applauded for thinking differently.