10 Wildstar tips to get you started

WildStar might well be the most exciting MMO launch since Guild Wars 2, but it’s also quite unlike your average World of Warcraft clone.

On the surface it seems to follow in the footsteps of WoW, but its approach to character progression, combat and skills means you have to approach it in a slightly different way, which the in-game help and tutorials don’t always make clear.

There’s nothing, however, that MMO veterans won’t be able to cope with, while even the most hapless noob can grasp the core concepts with just a little help.

Before you get stuck in, you might want to give our extensive Wildstar review a read, but if you want to jump right in a few tips and words of advice should be enough to get you through the early stages of the game.

Here’s 10 things that should give you a helping hand starting out with Wildstar. 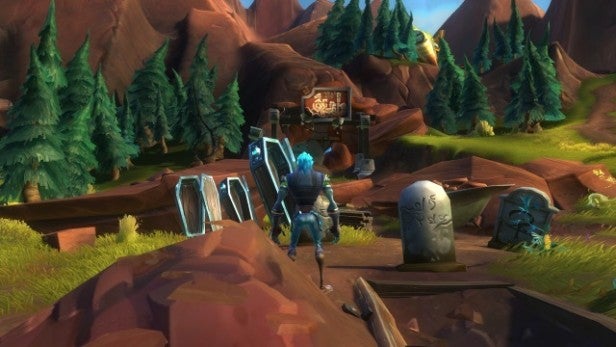 1) Build your character with care

First of all, you need to think about your choice of race and class. Not all races might have access to the class you want, and some race/class combinations, like Granok/Warrior or Mordesh/Spellslinger or Draken/Stalker just seem to make a good fit, with the race bringing advantages that the class can capitalise on.

You also need to think about how you want to play. WildStar’s systems are fairly flexible and most classes will work either solo or in a team, but some classes lend themselves more to solo play, while others make you better equipped for a support role. Classes also determine whether you fight at close quarters (Warrior/Stalker) or at range (Spellslinger/Esper/Engineer).

Bear all that in mind, but remember that WildStar allows players to tackle both damage dealing and support roles, so it’s perfectly possible to deal out large amounts of damage while sucking in aggro from enemies as a tank, or hit hard and heal within the same build. 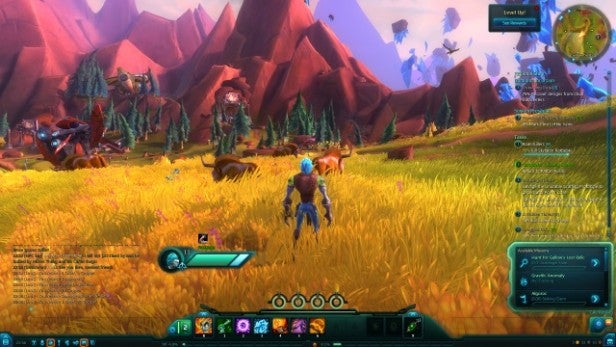 Each character comes with a class and a path. The first defines the kind of role you will specialise in, but the last gives you scope to tackle missions that are not so combat or collection-focused. You can play through the game without tackling any path quests – and some players even recommend doing so and focusing on your main  – but you’ll miss out on XP and on other perks that can make you a more effective player. Think about the things you like to do when you’re not just battling away.

Do you like to roam around the wilderness and climb the highest peaks? Then choosing the Explorer path will actively reward you for doing so, and even turn WildStar into a bit of a platform game.

Are you the type of player who reads every book and tries to track down every monster? Then the Scientist path is the one for you.

Whichever one you choose, just remember to keep tackling your path quests. You’ll find these in their own mini quest-list, which sits beneath your main quest-list on the right-hand side of the screen. 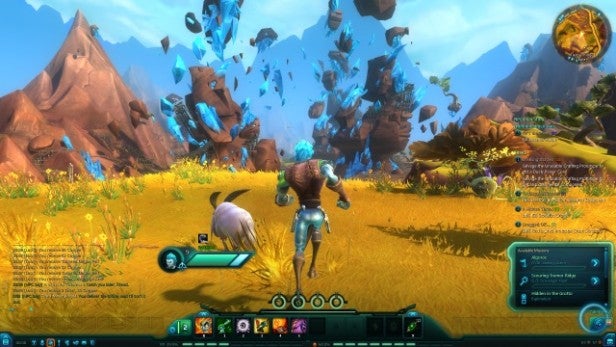 3) Learn about Telegraphs and how to evade

Telegraphs – the big triangular or circular markings that appear around you during combat – play a key role in WildStar’s combat. Telegraphs tell you where an attack is coming from and the kind of area it will affect, and also give you some idea of when it’s coming.

The trick is to keep moving. Some incoming attacks can just be sidestepped. Others need you to dodge, either with a quick directional dash (hold down the Shift key) or a double-tap of the movement key to evade. Don’t just stand there and suck in the damage: watch, move, turn and blast right back at ‘em.

WildStar doesn’t give you many skills to start with, or even many slots to put them in. You’ll unlock new skills as you level, but you’ll need to buy them first, and after a while you’ll have more skills than you have slots on that all-important hotbar. To manage these you’ll need to go back to the Skills screen, which isn’t exactly a good idea in a hostile zone.

As a result, you need to work out the best line-up for the current situation, and try and work out which skills or attacks can work together.

Some might be powerful, but might be limited by a slow cool-down time, which means you won’t actually use them as often as less powerful attacks with a fast cool-down. Mix and match different line-ups and give them a try in less dangerous areas, then take them into the tougher zones.

The stats in WildStar are a departure from the norm. There’s no Strength, Dexterity or Wisdom, but Brutality, Finesse, Moxie and Tech, so working out what each one means and does can be a challenge.

Grit, for example, affects your base health, while Finesse has more of an impact on ranged combat. There’s also an extra layer of complexity in that different classes use stats differently, so Brutality might affect the assault power of a Stalker, but Finesse will be the key stat for a Spellslinger.

Weapons, armour and implants also affect your stats, as well as your offensive and defensive capabilities.

The trick is to stack up the weapons and armour that affect your class’s key stats, and ignore those that are detrimental, even if they seem to make you a more well-rounded fighter. 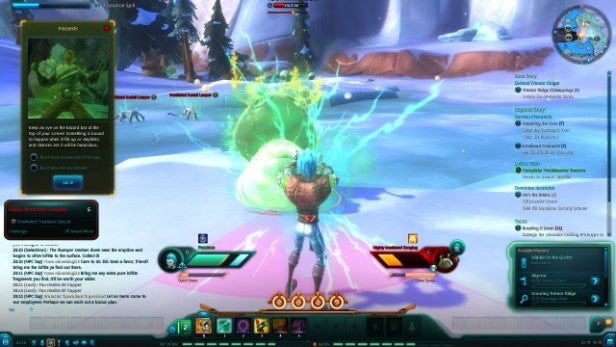 6) Keep control of your inventory

Enemies are always dropping loot, so much so that enemy lairs are often full of it. Plus you’ll also get more handed out when you complete many quests. It’s important that you don’t get stuck with great stuff but nowhere to put it.

When you’re back at a hub area flog or salvage anything you aren’t using or that you don’t need for crafting. WildStar is generous enough with loot that you won’t need to buy too many upgrades, but you will need cash to buy skills, instant resurrections and – eventually – mounts and housing. Apart from mugging monsters, selling loot is the easiest way to get it.

Planet Nexus is made up of huge areas with an awful lot of ground to cover, but there are some very effective ways of cutting the legwork down. You can use your sci-fi smartphone – the Datachron – to complete some missions instead of returning to the quest giver.

You’ll even get some missions coming in by Datachron, so keep checking to see whether you have any new messages. Some quests can be started simply by interacting with objects in the field – but you don’t really need to be told that some things will need opening or wrecking. 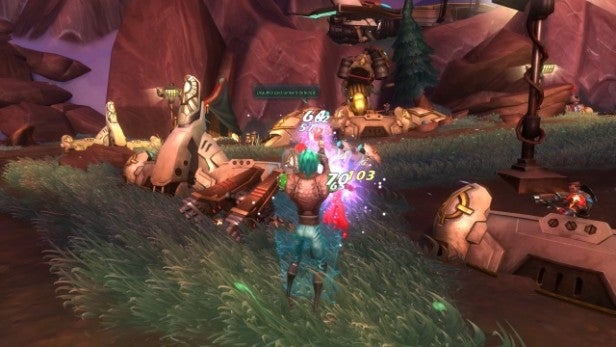 When you’re fighting, simply spamming the hotkeys will get you nowhere. Keep moving, do your best to target groups of enemies at once, and watch the screen for prompts. Some enemies have attacks that will stun you or root you to the ground. At this point the screen usually throws up a prompt, and pressing the indicated key or taking the indicated action will get you out of your jam that little bit faster.

Two other tricks will also help you survive. Firstly, each class has an innate ability; a skill that sits just on top of those in the hotbar, and is activated with a tap of the R key. Use it, particularly if you’re facing numerous or tough opponents. It might just even the odds.

Similarly, each class has certain skills which can interrupt an enemy’s attack and leave them vulnerable for a few seconds. Find out which interrupt skills you have, then use them without mercy. Again, they can be crucial when the going gets tough.

If you see someone with an exclamation mark over their head, talk to them and accept their quest. You’ll often find that you can tackle several quests at once, or stack up a range of quests in the same area. If you find a particular quest too difficult or just too time-intensive you can always put it on the back burner for now and even drop it later. Completing quests will get you loot and experience a lot faster than just grinding your way through foes.

While you’re at it, look out for challenges in the different quest areas. These kick in automatically and often reward you for doing what you’re doing already, providing you can do it in limited time. There’s nothing to be lost in failing a challenge, and plenty to be gained should you succeed.

If you’re banging your head against a brick wall, try something else. A quest that’s causing you grief right now might be easier with another level or two under your belt, and if there’s one thing you can be sure of, it’s that WildStar always has somewhere else you can go and something else to do.

Remember: if you don’t know where you need to go, just click on the quest info on the right-hand side of the screen. You’ll get a handy indicator that tells you which way to go. 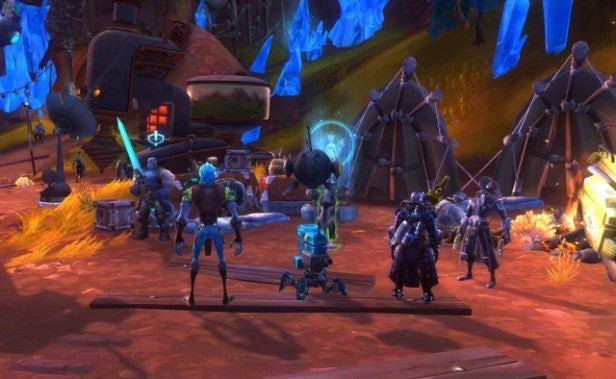 WildStar’s levelling system is complex, and possibly the most controversial aspect of the game.

First you have skills, then you have tiers within those skills that boost the damage done, area affected or benefits gained.

Beyond this you also have Amps, which you can either earn or buy in the game, and which you can allocate using a special Amps grid to boost your stats and capabilities, and tweak your character for certain roles.

The challenge is a) understanding how all this works and b) remembering to take care of skills, tiers and amps as you level.

During play, we’d often level up and – despite some pretty obvious prompting – forget to add tiers or allocate Amps. This makes your character weaker and the game harder than either needs to be, which can be a big mistake.