OPINION: Nick Cowen explores why Destiny should be the blueprint used for future AAA console titles

Unless you’ve been locked in an isolation ward for about two years, or you have no interest in videogames (in which case, why are you reading this?) you’ll be aware of the imminent arrival of Destiny.

After about two years of hype, rumour, conjecture and promotion, Activision’s new grand IP is about to land in the market this September with the impact of an atom bomb.

Destiny is big. Its sheer size alone meant it couldn’t be covered by journalists in any traditional sense; hardly any game writers had any hands-on time with the game before the Alpha and Beta builds were sent to their consoles. This made sense – the scope of the game just didn’t lend itself to a brief hand-on experiences. 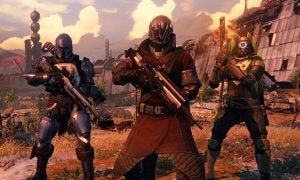 Bring some friends: Bungie says Destiny is built from the ground up to be a co-op experience.

But Destiny is huge in terms of its scope and ambition, too. Bungie’s persistent world shooter has a lot riding on it and not just because its development and marketing costs are rumoured to be in the region of an eye-watering $500 million.

Destiny is the product of a ten-year publishing deal struck between Activision and Bungie, which the publisher plans to see rolled out in instalments and expansions for pretty much the entire scheduled lifecycle of the new generation of consoles.

For Activision, Destiny can’t arrive soon enough. Not only is the first new IP that the publisher has pushed into the market in a small age, it’s also the franchise that could provide ballast to the fall in sales of the Call of Duty series. While COD still sells by the truckload, Call of Duty: Ghosts saw a slip in sales from the franchise’s previous entry – Black Ops 2 – and it’s possible the series’ audience could be suffering from fatigue. 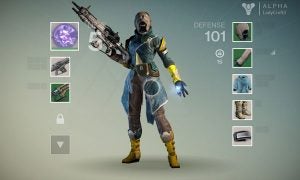 Streamlined: Switching out weapons and equipment in Destiny is a simple point and click affair

Bungie’s lineage alone is enough to recommend taking a look at Destiny. The Halo series the Bellvue-based developer created at the dawn of the 21st Century was both an FPS juggernaut and system-seller. While it may be hyperbolic to credit Halo solely with establishing Microsoft’s credentials in the console market, it went a long way towards eating into Sony’s audience numbers. Furthermore, after Halo, multiplayer modes began to become increasingly standard issue in most FPS games.

It’s hardly surprising, then, that Destiny is built from the ground up to be a multiplayer experience. Online fragfests are part of Bungie’s DNA. But Destiny takes their ambitions widescreen and the fact it’s likely to sell heaps of units isn’t just because its production values are off the charts.

Its draw is down to Bungie seamlessly combining of three of the most popular genres in the gaming industry  currently and then stripping the tedium right out of them. 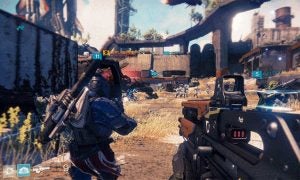 Big man with a gun: Players collect an assortment of weapons and powers in this shoot-n-loot

Destiny, at its core, is an FPS, but Bungie have combined shooter mechanics with the levelling structure of an RPG and placed the player in a world that’s comparable in size to that of an MMO. Destiny is by no means the first game to do this – the most recent example of this cross pollination was Trione World’s ill-fated shooter MMO, Defiance – but it’s the one of the best in recent memory to make the in-game experience completely streamlined.

To wit, players don’t find themselves having to cover acres of ground to reach new environments filled with quests. Their dropship launch pad simply dumps them into any environment they choose and hooking up with other players is accomplished smoothly on the fly. They’re also able to drop and pick up quests at the touch of a button; bored with grinding through old Russia, then simply whip out your Ghost and return to orbit.

Unlike in many other RPGs, players don’t find themselves fiddling through lengthy menus in order to unlock new powers or equip their character with new loot and weapons. The menus are a simple point and click affair, which allows players to switch out equipment with ease. 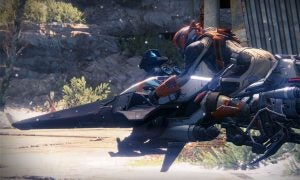 On yer bike: Bungie has created a rich world in Destiny and made it sublimely easy to explore.

Above all, though, Destiny sees Bungie doing what the developer became world-renowned and loved for: creating a vast and rich universe filled with lore and wonder for players to get lost in.

The developer has, for the most part, kept its powder dry with regards the plot details, revealing surprisingly little about its new sci-fi world and the narrative it plans to use to link up the players’ activities.

All we know at this stage is Destiny’s basic premise; set on earth thousands of years after a war nearly put paid to humankind as a species, players take on the roles of Guardians – the foot-soldiers protecting the last bastion of humanity using alien weapons and tech.

Destiny has always been an anticipated title, but weeks from its release it feels more vital than ever. More than just an ambitious gaming hybrid, Destiny feels like a blueprint for triple A titles moving forward. It’s ambitious, expensive and risky, sure, but if it delivers on its promise it will lay claim to being the first game to define this current generation of consoles.