Is Light L16 camera a gimmick or a Canon 5D MKIII killer? We take a closer look at its key features to see if it warrants your photo-grabbing attention.

The Light L16 is a camera quite unlike anything you’ve seen to date. It takes the intensive processing and clever multi-shot modes that make phone camera images pop and blows it up. To the extent that Light says the L16 can compete with DSLRs.

We’re interested, though. We want a Light L16. Sometimes you want to step out with a camera that’ll fit into your coat pocket rather than one you need a rucksack just to lug around. Let’s take a closer look at whether it can really do battle with a ‘proper’ camera. 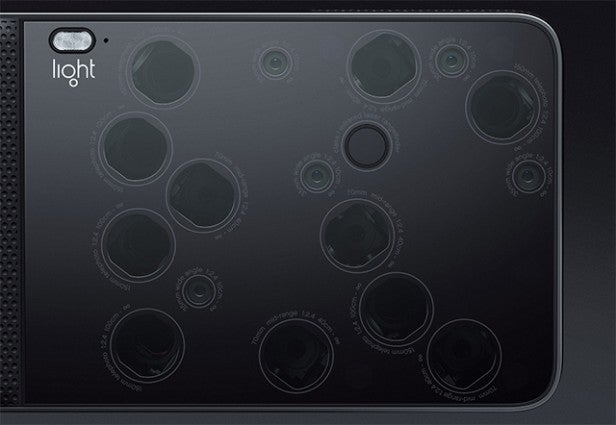 The interesting part of the Light L16 is that it uses multiple small sensors rather than one big one to make its images. Peppered throughout its front are 16 different lenses, pointing to 16 different sensors in the camera’s body.

Light says that for any one photo, 10 of these sensors will be used to make the final image.

The camera will choose which ones, and it’ll depend largely on the focal length you choose for your photo. You can shoot between 35mm and 150mm, using an array of lenses plus processing to simulate an optical zoom.

There are legitimate 150mm lenses in the thing, though. It’s not all tech trickery. The L16 houses five 35mm (equivalent) lenses, five 70mm lenses and six 150mm lenses. Here’s a look at its insides: 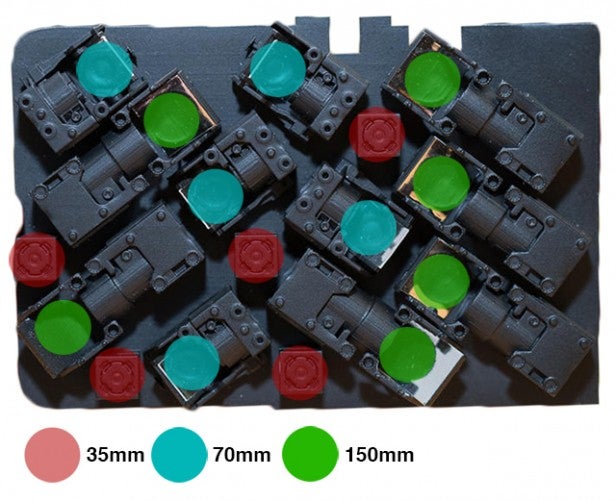 So while there’s a good amount of computing work involved in making one of these photos, the actual image data isn’t being made up. It’s still being harvested by good old lenses firing onto sensors.

The Light L16 uses a folded optics design to make fitting these long zoom lenses into such a small body possible. This lets the majority of the lenses’ optics sit ‘sideways’ where DSLR lenses stick straight out.

16 lenses are better than one

Even then, the lenses are still tiny, particularly the 150mm ones. It’s partly because these are all plastic prime lenses. No singular lens here has any zoom of its own. It’s also down to the size of the sensor.

The Light L16 has 16 very small sensors, smaller even than those of the top smartphones. Each is 1/3.2 of an inch. The exact dimensions will depend on their native aspect ratio, but you’re looking at roughly 6mm by 4.5mm per sensor. That’s smaller than a microSD card.

Compare that to the 36mm x 24mm of a full-frame sensor, and you can understand why some traditional photographers might be a bit sniffy about the Light L16. If you’re not in that crowd, the basic rule is that smaller sensors produce much noisier results as soon as the light level becomes sub-optimal.

There’s no easy solution to be found in the lenses themselves either. All 16 lenses have an aperture of f/2.4, which is ‘slower’ than that of all top-end smartphones these days. The LG G4 has an f/1.8 lens. The lower a lens’s f-stop rating, the more light it brings in. F/2.4 isn’t too bad when you’re dealing with a large sensor, but it’s not too hot when you’re using a tiny one. So, what’s the solution?

Multiple eyes as the noise killer

The Light L16 is all about using multiple eyes to see the same scene, so that what one sees can be used to augment what is seen by another. We already know that a photo will use the information from sensors shooting at different focal lengths than we’ll see in the final image too, showing there’s going to be some real complexity to the computing behind the scenes.

At 35mm, not only do all of the 35mm lenses fire, so do the 70mm ones. The part that makes the Light L16 doubly exciting is that the 70mm and 150mm cameras have moving mirrors that let them focus on different parts of the scene. They can move. DSLR lenses don’t do that.

Shooting at 25mm, the 70mm cameras are  used to fill in the view on top of those 35mm static cameras: four for the corners, one for the middle. The 52-megapixel maximum resolution capture doesn’t just come from four 13-megapixel 35mm cameras, all with a fairly similar view, but from another five 70mm lenses too. The data isn’t just interpolated.

Maybe it’s time for the cynical DSLR owners out there to start being at least a little impressed. 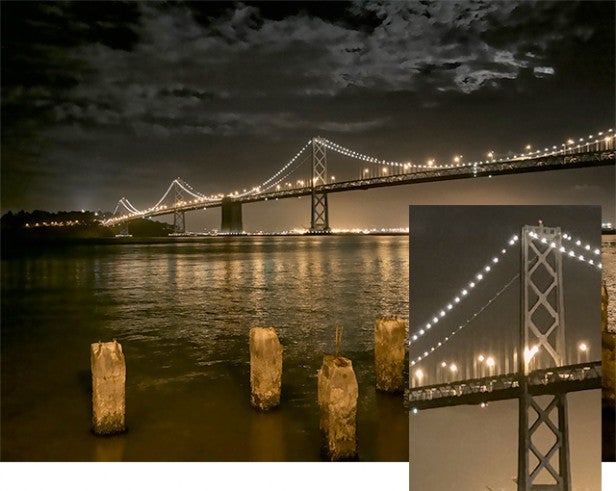 At 150mm, you get a somewhat similar effect by angling all the 150mm lenses to point in the same direction, and using all of the 70mm lenses once more.

It’s in-between the 35mm, 70mm and 150mm native focal lengths that you’ll start to lose maximum possible resolution. At the least you’ll get 13-megapixel images, though.

You can simulate any aperture

The Light L16 also makes a ‘depth map’ of any scenes you shoot, something you won’t get from a DSLR. What this means that it can tell apart what you’re focusing on from the background behind it, and anything in front of it.

This is then used to simulate variable aperture, even though all of the 16 cameras in the Light L16 have exactly the same f/2.4 aperture in reality. Just like a phone camera, the actual aperture never changes.

What this means in practice is that you can alter the depth of field, progressively blurring the background post-shoot to give your subject even more ‘pop’. 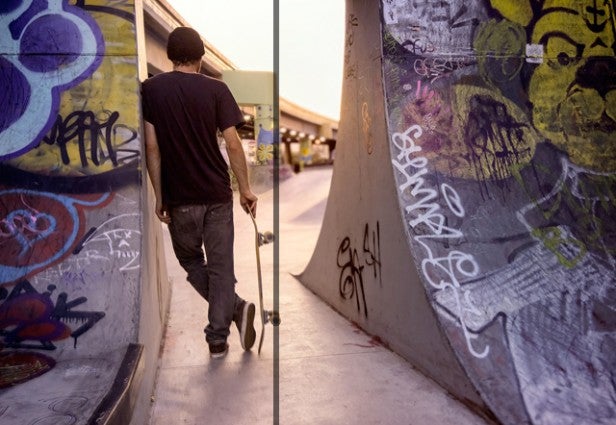 This is done using the same sort of digital processes you might use in Photoshop, and Light suggests you’ll be able to get the equivalent of f/1.2 aperture using them. The issue here is that it seems extremely unlikely the Light L16 will be able to really emulate the bokeh effects of a high-quality DSLR lens. Those things don’t just blur your images, but do something that looks, well, far more artistic.

There are also some worries about whether the effect with be nuanced enough. The various attempts we’ve seen in phones such as the HTC One M8 have been fairly poor, often getting the depth info wrong.

Given how many of the L16’s lenses are used to actually harvest picture information, it seems likely the depth map is created largely using the parallax effect. An analysis of how the position of the different lenses affects their view of the scene will tell the L16 what parts of the image are near and far.

It has laser focusing

There’s another bit of tech up the Light L16’s sleeve, though. It has a laser rangefinder near-ish its centre of its front.

What this does is to fire out an IR signal from the front of the camera, which then bounces off whatever it hits and returns to the L16. The time this takes lets the camera tell how far away the object at the centre of the scene is, letting the AF system skip right to that point. 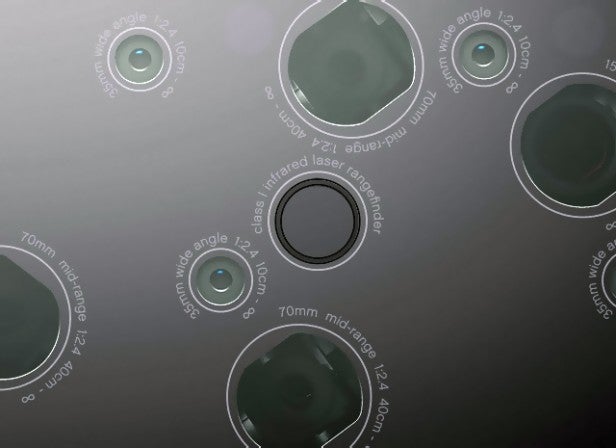 We’ve seen a similar system in phones like the LG G4. And it’ll likely be used to inform the depth map the camera builds up too.

Whether you think ‘fake’ shallow depth of field is likely to end up looking like a gimmick, the HDR potential is definitely pretty exciting. Light has confirmed it’s working on this too.

HDR has become one of the most important tools of mobile photography, generally involving merging multiple exposures to increase dynamic range, something tiny sensors are never good at delivering. It dictates how much detail you see in the lightest and darkest areas of an image before it is crushed into shadow or clipped/overexposed.

While we don’t know whether a ‘normal’ Light L16 image will do this, an HDR should could potentially shoot its tiled 35mm images all at different exposure settings to produce an incredibly effective and natural-looking HDR effect. Crucially, all the images will be taken at the same split-second too, meaning you won’t need very still hands or a tripod to get perfect results.

While DSLRs tend to have good dynamic range, hardly any have good HDR modes. Not ones that work handheld, at any rate.

Is it worth getting excited about?

If the Light L16 does what it promises and manages to dramatically reduce low-light noise and increase dynamic range while offering top detail, it could be worth its £1000-plus asking price. It’s not going to revolutionise image quality among cameras in general, but could dramatically improve how portable that sort of quality is.

The Light L16 doesn’t really have to outdo the Canon 5D MKIII. It just needs to outdo the Sony RX100 IV and other large sensor compacts that are currently the best choice for coat pocket cameras. Just recently I bought a Nikon Coolpix A camera because I wanted exactly what the Light L16 promises: DSLR quality in your pocket.

If it can actually deliver this, and do so at 70mm and 150mm as well as 35mm, we’ll be impressed. We might even have to get the debit card out. Even if it does look a bit silly.

Are you excited by the Light L16 camera? Let us know in the comments section below.