On the evening of 14 January, HMV announced it was to bring in the administrators. The 90-plus year-old music retailer is on its last legs. And while it’s obviously a significant blow for music and film – as one of the last well-known high street sellers of CDs and DVDs – it’s bad news for tech too.

HMV – a pillar of high street tech?
The HMV brand is recognised as one of the UK’s leading sellers of CDs and DVDs. But nowadays it is also one of the premier retailers of popular tech, sitting alongside stores like PC World in many towns as the only place where people can get hold of the latest tablet from Samsung or the new £300-odd headphones from the Beats by Dre. range.

But when did HMV become such an important part of high-street tech? Earlier than you probably think. Before the boom in tablets and “style” oriented headphones, HMV stores across the country were already the key place on the high street to sell earphones – helping to introduce many gadget-buying saplings to brands like Sennheiser and Skullcandy. How many of you bought your first “proper” earphones from HMV?

Until fairly recently, though, the tech section in HMV stores was often relegated to a corner. That all changed in 2011.

HMV began to capitalise on the style headphone movement. It was the perfect match too – what better shop was there to promote musician-branded headphones than a music shop that sold headphones? As HMV CEO Simon Fox said to the Guardian in October 2011, “When acts like Lady Gaga and Justin Bieber come in to our stores, it is to promote their headphones.”

In January 2012, just a year ago, HMV made its move towards tech more formal. As the company’s share of the games market decreased, following pressure from the cut-price tactics of supermarkets, CEO Fox detailed how HMV has changed its ways.

In a trading update, HMV announced that 144 stored had been refitted with a renewed focus on tablets and headphones, and that technology sales had leapt up by 51 per cent. Fox said that the company had sold “500,000 headphones and 20,000 tablet computers [in the five-week lead-up to Christmas]”, that “the fact we’ve become the number one retailer of headphones in such a short period of time shows they fit very, very well with our brand.”

Although HMV’s headphone-centric strategy conveniently synchronised with the increase in popularity of headphones like the Beats by Dre. range, the company has also been responsible for the continued proliferation of high-quality, stylised sets. 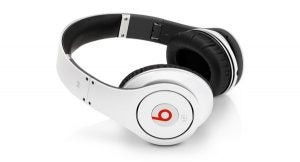 HMV has become the key UK reseller for several up-and-coming audio brands, including House of Marley, RHA and Soul. If HMV’s are to close up shop, where will these brands go? It’s a similar story for tablets. Samsung may not need HMV’s help, but the chain’s shops are some of the last places you can still find tablets from Archos on the high street.

HMV has largely done right by these brands, which would struggle to garner much attention elsewhere, too. It’s one of the few stores that lets buyers audition headphones, and prod tablets.

Taking one mid-level store as an example, HMV Wimbledon gives over somewhere between a quarter and a sixth of its shelf space to tech. Tech has a more prized position than either music or video games.

We’re losing one of the best ways for tech to be showcased on the high street. And that’s a shame.

An Inevitable End
However, as the BBC reported, retail analyst Neil Saunders cites that the demise of HMV “was always inevitable.” Even during the early months of its turn towards tech, HMV was already on the brink of collapse. Its stock price barely crept above 5p a share during 2012, having spent most of the time from 2000-2008 well above £1 a share.

HMV has been circling the drain for some time, but that doesn’t mean we’re not losing something worthwhile – even if it is no longer worthwhile to its shareholders.