OPINION: The BlackBerry KEYone has gone on sale in the UK, bringing a physical keyboard and a more familiar BlackBerry form to the Android world. But Simon Osborne-Walker ain’t buying it.

For three Christmases in a row I asked Santa for a Big Trak. I stopped and stared longingly every time the TV advert came on. I mean, this was the ’80s and a robot truck was basically like someone reaching through a portal and handing you an artefact from the future, or Kelly LeBrock appearing in your living room even though you’d only been able to code your fembot requirements on a rubber-keyed ZX Spectrum.

My mate John from up the road had a Big Trak, and I pestered him to roll it out whenever I went round there (and when we weren’t giggling over Garfield). We’d programme it to trundle around his house and scare his dog, and that was enough.

Santa never turned up with one. (I did get an awesome inflatable He-Man Battle Cat one year, but that’s a-whole-nother story, yeah?) But when the original Big Trak got re-released about 10 years ago, I finally fulfilled my childhood dream. And boy was it rubbish.

Times move on – I’d gotten a Sony AIBO robot dog by then, which didn’t have any stupid buttons with which to tell it what to do. OK, it was crap at getting itself back to its charging station, and it moved like it needed a hip replacement (times four), but it was such a massive step forward from that dumb-arse plastic tank.

I’m generally an optimist, though, and love a bit of old-school when it’s done well. The trouble with the BlackBerry KEYone is that it’s just the wrong kind of retro.

Its physical keyboard is simply giving us tech from a near-past that makes performing everyday tasks less efficient without giving any real satisfaction.

In many ways, you could argue that the Nokia 3310 reboot is doing some of the same, but at least Nokia’s rose-tinted trip is offering enough of a unique, novel experience. The 3310 isn’t just about retrograding one key feature, but sending you back to simpler times. 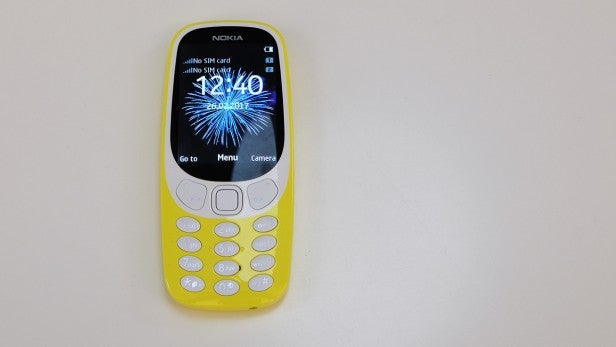 “But I type better on physical keyboards,” I hear you cry.

Do you, though? When did you last actually use a BlackBerry? I was so excited about the Priv, with its combo of Android and a slide-out ‘smart’ keyboard, but within days I’d quite happily have glued that bloody keyboard up and out of sight. I persevered with the physical ‘board for about two days of the two months I had the phone, and it frustrated the hell out of me. I discovered that actually those big on-screen keys and some decent autocorrect make for much faster typing. True story.

Just last week I was on the train and a guy stopped next to me with wild panic in his eyes and sweat dripping from his brow. “Know how to use a BlackBerry, mate? Lost my phone and someone lent me this pile of crap.”

I took the venerable BlackBerry Bold and showed this unfortunate fellow the basics – all the while saying such things as “No, I realise it doesn’t make too much sense, but…” and “Yeah, you’d think your text messages would be found under Messages, but…” Awful UI aside, using the little keyboard was just a thumb-numbing chore. I really hope that poor guy has a new phone by now.

Honestly, you might have fond memories of your old BlackBerry, and think that what you really need in your life is an array of tiny mechanical buttons below an undersized touchscreen, but I’m not convinced that what you think you need is what you actually need.

Phones have come a long way in the iPhone era, and the time for wearing rose-tinted specs is not when you’re typing out an important work email on your commute while trying to pretend you didn’t have that fourth glass of wine at lunch.

BlackBerry has actually done a really nice job with its implementation of Android, and its security features are excellent. I just want to see those things in a proper 2017 phone, not a gimmicky throwback design.

If you really have to scratch a retro itch, go buy a turntable and get back into vinyl like everyone else. At least it won’t get you fired for typing a rogue ‘n’ in the headline of a presentation about spending cuts.

But not everyone on TrustedReviews feels the same:

Alastair Stevenson, Reviews Editor
“At first glance the KEYone looks like the phone BlackBerry should have released five years ago, when people still cared about physical keyboards and BB10 OS hadn’t become a black mark on its brand. But having gotten my mitts on it I’m now not so sure. The keyboard has a few cool uses, like the ability to use it as a trackpad, which is useful when editing emails on the go. Hopefully my positive opening impression will prove true with longer use…”

Max Parker, Mobiles & Tablets Editor
“It’s true that not everyone needs a phone with a keyboard anymore. I think, and I hope, Blackberry knows that too. But having a bit of choice and something different is good, especially when phones are so samey at the minute. I’ve seen enough black slabs of metal to last me a lifetime, and Blackberry’s approach is at least a change. Its touchscreen phones didn’t have that BB spark, but the KEYone does. Good on them for doing what they know best.”

Brett Phipps, Games Editor
“Simon and I feel pretty much the same way, just at opposite ends of the spectrum. When I watched the Samsung Galaxy S8 keynote, I was convinced I needed that phone. But then I came back to reality and realised I didn’t deserve an S8, simply because I wouldn’t use 90% of its tech. The KEYOne appeals not because it’s a retro throwback, but because it doesn’t do anything more than I need it to. I don’t need a dual camera, the latest graphics, or face recognition. I don’t even need a voice assistant to not understand my abrasively Cockney accent. I just need a phone to use the same five apps I use every day and not tell me I meant ‘duck’ when I obviously meant the other word.”

Love or loathe the BlackBerry KEYone’s keyboardiness? Let us know in the comments below.