I dutifully installed iOS 9 as soon it was available for my iPhone 6 Plus, but it seems there’s something odd going on with Spotlight search.

As usual with an iOS update, there’s nothing too jarring. Most of the new functionality – the shortcuts and tricks – unfold gradually as you use it.

That’s how I’ve experienced iOS updates in the past.

One of my favourite features since iOS 7 has been Spotlight search. Drag down on any screen and a search bar appears, making it easy to find the app you’re looking for.

On the whole the changes to Spotlight search in iOS 9 are a boon. Being able to deep link into apps is great. Found a hotel you like on the Expedia app? Well now Spotlight search can take you right back to that result if you search for the name of the hotel. Clever stuff, on the whole.

I’ve got 251 apps installed on my phone, so Spotlight made life a lot simpler. It drastically reduced the time I used to trawl through my homepages to find what I needed.

Just a vague recollection of what an app was about was enough for Spotlight to sniff it out for me – my own digital bloodhound.

That’s all changed with iOS 9.

At first I thought the iOS 9 update had deleted a load of my apps. I tried to find my Barclays banking app, but Spotlight only brought up suggested emails, websites and maps. Useful under different circumstances, but not what I was looking for.

I typed “Google” next – a search I’ve used to easily get to Google Docs, Drive and Gmail. No dice, but hey, Spotlight thought, why not try Google News, Google Maps or, by now the most antisocial of social networks, Google+? 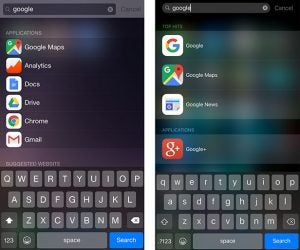 So what’s going on? Has a bunch of apps been deleted from my phone?

No, they’re still there, still on my homepages or tucked away neatly in folders. The issue appears to be a change to the way Spotlight searches for apps on my phone.

It seems that, on previous versions of iOS, Spotlight used the full name of an app – the long name you can find in the App Store description.

Developers tend to create long, descriptive names for their apps to make them easier to find – it’s essentially some search engine optimisation for the App Store.

So Drive is actually called “Google Drive – free online storage from Google” in the App Store. Previously Spotlight would find Drive using any of the words in that title.

In iOS 9 I can only find apps if I use a word in the label – that’s the really short name under the app logo on the homepage. This means you need to remember the specific app label, not just the developer name or a word you’ve associated with the app.

Are you a fan of Football Manager Handheld 2015? Well forget searching for it using the word “football”, you’ll need to use “FMH” instead.

This is a problem. Developers purposely choose short names for their app labels because the space under the app icon is limited. You don’t really need a long and descriptive name either – you can usually recognize an app by the way the logo is designed.

My brain isn’t big enough to remember hundreds of app labels. I’ve a memory like a sieve for names, so I need search to do the heavy lifting for me.

Hopefully Apple and app developers will cotton on to this issue fast and find a way to get broader results from a search term, whether that’s using keywords, tags or even the app’s full name and description.

In the meantime it’s time for me to start clearing out a load of old apps and memorising the labels of the apps I use most. Dull work indeed.

See also hands on with the iPhone 6S

Have you noticed any issues with iOS 9 since upgrading? Let us know in the comments.