With Call of Duty: WWII, arguably the world’s best-known shooter series is going back to its roots. We’re talking boots on the ground, not jetpacks on the moon, M1 Garands and Panzershrecks instead of sci-fi SMGs and plasma launchers.

For many fans, myself included, this can’t help but be a good thing; while we’ve enjoyed some of Call of Duty’s flights of fantasy, we’re looking forward to a grittier, more authentic CoD. We want the action, the bombast and the blockbuster spectacle, but we want it grounded in the shattered cities and battlefields of 1939 to 1945.

This is where the series began back in 2003, with a new studio, Infinity Ward, wanting to expand the ideas its team had developed while working on 2015 Inc’s groundbreaking PC FPS, Medal of Honor: Allied Assault. Allied Assault had been a new kind of shooter, both more realistic than the console World War II games that had launched the series and more cinematic, putting players in the kind of scenes they’d witnessed in Band of Brothers and Saving Private Ryan, with awesome visuals, immersive action and a stirring orchestral score.

Call of Duty doubled down on all that while adding so much more. Here was a shooter where you no longer fought as a lone wolf, but as part of a team of courageous soldiers. The cinematic feel was turned up to maximum, along with the sense of real danger. This wasn’t a game where you charged the enemy lines head-on, spraying out machine-gun fire, but one that made you work with the available cover and take rapid, targeted shots through iron sights. Powerful and visceral, Call of Duty wasn’t just a shooter, but an attitude. 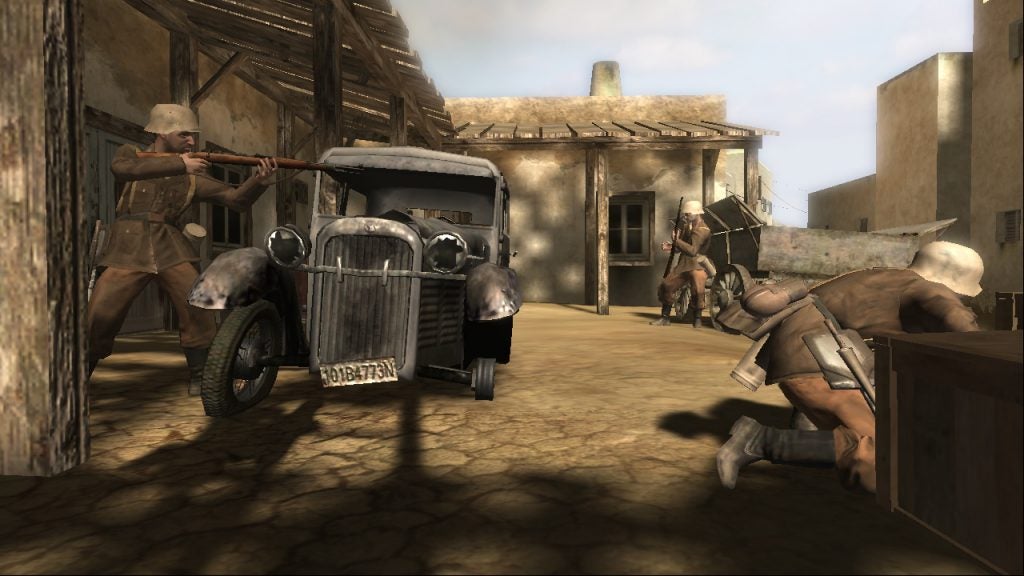 The games that followed transformed the FPS genre and – you could argue – the gaming world. Sometimes we forget them, focusing on the HD era high-points of Modern Warfare and Black Ops, yet these earlier historical CoDs gave us the thrills and tension that put the series where it is today. That’s why we’re celebrating the classic World War II Calls of Duty, starting with the worst and working our way through to the best.

Call of Duty: Finest Hour (2004)
Xbox, PS2, Gamecube
It’s hard to hate on Call of Duty: Finest Hour. Developed by Spark Unlimited as a spin-off for the Xbox, GameCube and PS2, it did its best to bring some of the action of the PC original to ageing console hardware with mixed results. Sadly, it struggled to capture the intensity of Call of Duty, descending into a pedestrian World War II FPS that couldn’t match EA’s Medal of Honor: Frontline or Rising Sun, despite an interesting campaign that flitted from one soldier’s point of view to another as it moved from the Russian front to North Africa to the Western Front in 1944.

Impressively, the Xbox version came with 32-player multiplayer, but this is far from Call of Duty’s finest hour. 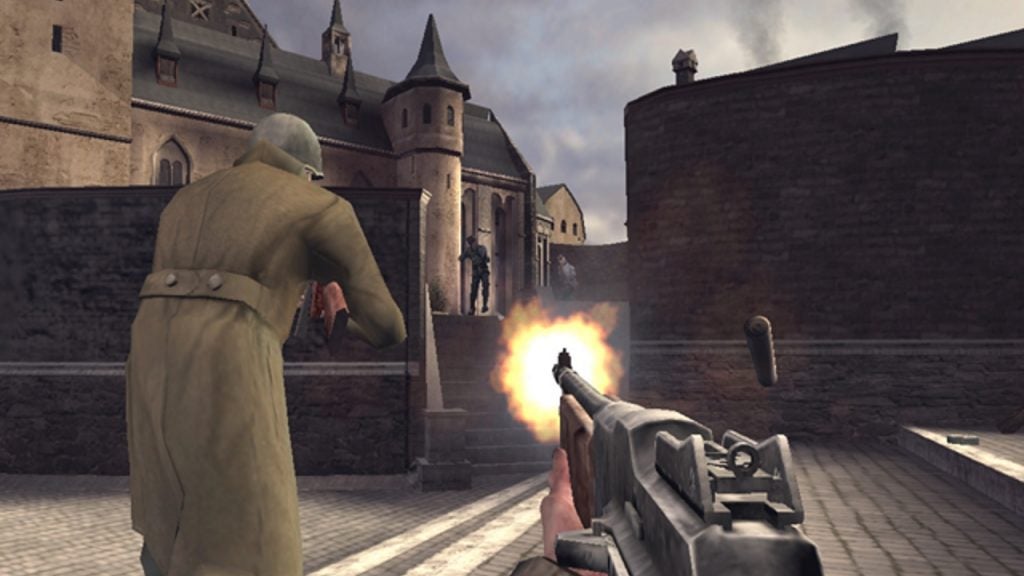 Call of Duty 3
Xbox 360, PS3, PC
Treyarch’s first proper Call of Duty was developed in a rush, and it shows. While visually impressive, the campaign missions aren’t as tight as in Call of Duty 2, and often empty bombast substitutes for visceral action, while driving missions and tank missions do little beyond break immersion. What’s more, while it comes from a cool idea – following different British, American, Canadian and Polish troops through the Normandy campaign – it makes for an oddly monotonous game, with only a handful of sniper missions and some terrifyingly noisy battles sticking in the memory. Frankly, the campaign was (and is) a mess.

Call of Duty 3’s saving grace is its multiplayer, expanding to 24 players on consoles with great maps and vehicles and the brilliant, Battlefield-inspired War mode. All the same, this wasn’t the game to follow the mighty Call of Duty 2. 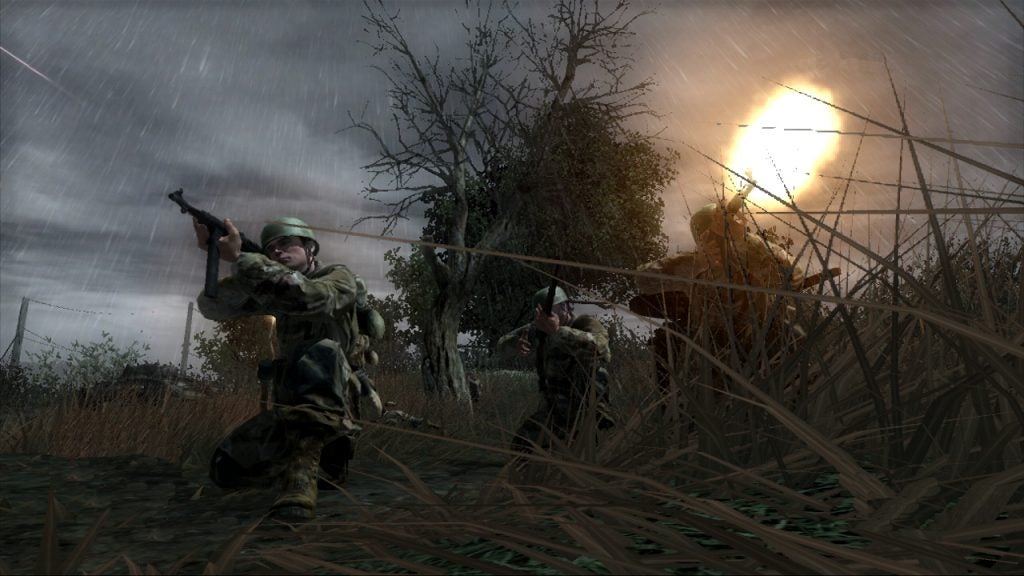 Call of Duty (2003)
PC
The original hasn’t aged all that well, but you can still see it as the start of something new and thrilling. Even more cinematic and intense than Medal of Honor: Allied Assault – which many of the team helped develop – Call of Duty went big on dramatic confrontations, CPU-controlled squad mates and that gritty, gung-ho feel that defines the series. What’s more, it laid down the template for future CoD campaigns, switching between multiple protagonists in different World War II theatres, to take you from Operation Overlord to Stalingrad to Germany and the heart of Nazi power. In its own way, its AI was as revolutionary as Halo’s, moving away from heavily scripted encounters to more interesting battles with dynamic enemies and comrades.

Play it now and it’s hard to imagine the impact that it had at launch, but this is where the CoD phenomenon began. 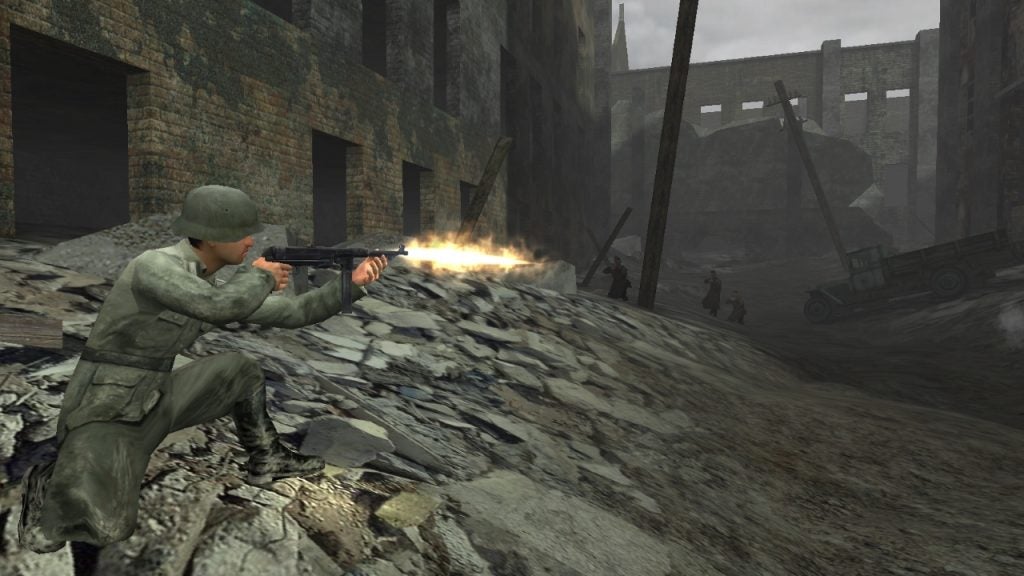 Call of Duty 2: Big Red One (2005)
Xbox One, PS2, Gamecube
The least remembered and under-rated Call of Duty came out within a week of the mighty Call of Duty 2, but is more than the cheap console cash-in you might expect. Activision charged Treyarch with building a game that could bring the authentic flavour of Call of Duty to the outgoing console generation, and Treyarch stepped up to the plate. Sure, the action is more funnelled and confined than in the mainstream entries, but The Big Red One captures the frantic action of CoD across missions in Italy, Normandy, North Africa and Germany, using vocal performances from actors who had starred in Band of Brothers, along with copious amounts of period footage.

Treyarch also did its best to tell the story of your 1st Infantry Division squad and soldiers, and pulled off miracles with the graphics, given the limitations of the hardware. Multiplayer was basic, but you can see why Big Red One earned Treyarch its big chance with Call of Duty 3. 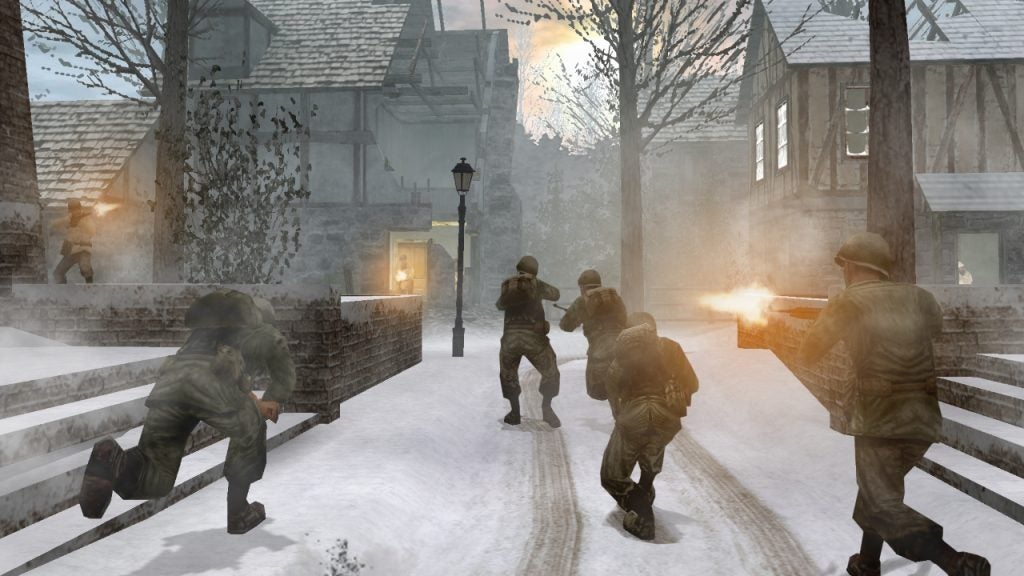 Call of Duty 2 (2005)
Xbox 360, PC
This wasn’t just the shooter that redefined a genre, but one that helped set the benchmark for a whole new console generation. Microsoft launched the Xbox 360 with a series of good-looking but insubstantial titles – Kameo: Elements of Power, Forza Motorsport 3 and Perfect Dark Zero. It was Call of Duty 2, however, that showed gamers what you could do with the new hardware and Xbox Live.

At the time, CoD2 seemed incredibly realistic, giving us sun-drenched cities in North Africa, the snowbound ruins of Stalingrad and the most epic D-Day landing sequence anyone had seen outside of the cinema. It had you cowering behind cover as tanks crawled across the landscape or bullets whizzed past your ears. The set-piece battles were jaw-dropping and feverishly exciting. CoD2 also created or refined mechanics like tossing back grenades, recharging health and the iron sights view, and most importantly it transformed multiplayer, with new modes and a new accessibility that brought online combat to the mainstream console audience in a way that even SOCOM and Halo 2 hadn’t managed.

It’s not the best CoD, by any means, but it’s right up there with Modern Warfare as the most influential. 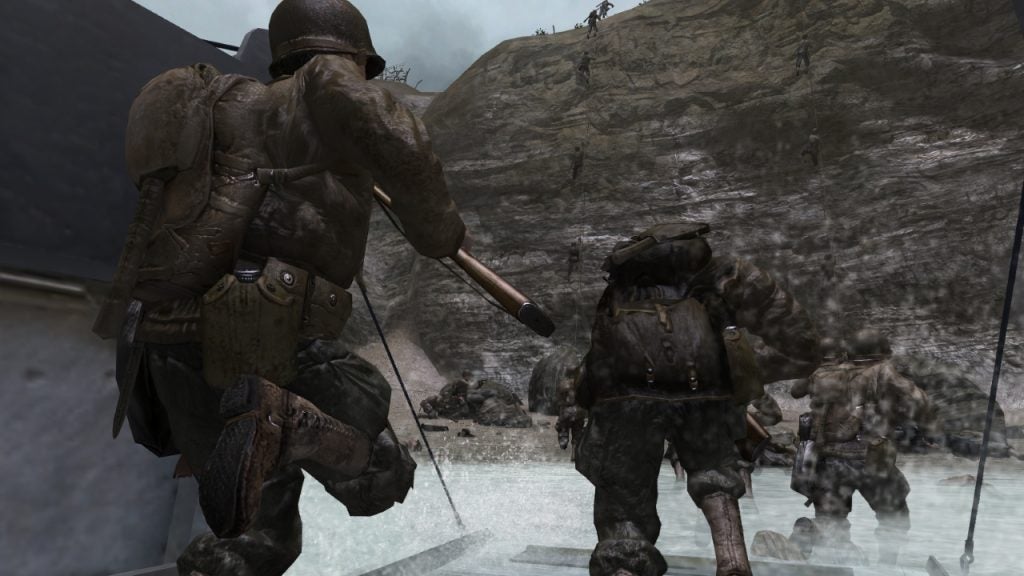 Call of Duty: World at War (2008)
Xbox 360, PS4, PC
Given the miseries of Call of Duty 3, few of us had high hopes of Treyarch’s second entry in the mainstream Call of Duty saga. What’s worse, the previous year’s Modern Warfare was (and still is) regarded as a high water mark for the whole shooter genre. World at War couldn’t match Infinity Ward’s masterpiece, but it countered with its own crazy, overblown, high-concept Hollywood action movie appeal. It didn’t so much take you on a soldier’s journey through Russia, Germany and the Pacific as drag you kicking and screaming by the scruff of your neck, hitting you with ludicrously tense sniper missions, burning buildings, flamethrower assaults on Japanese-held islands and a hugely exciting battle for the Reichstag in Berlin. What’s more, Activision threw money – and star power – at the campaign, bringing in Kiefer Sutherland and Gary Oldman, the latter making his debut as Reznov; a recurring character in the three Black Ops games that would follow.

If the campaign is a CoD classic, World at War also scores on the multiplayer front. It was the first Call of Duty with a Zombies mode, it improved Modern Warfare’s class, rank and unlocks systems, and it found room for some brilliant killstreaks – though whoever designed the Attack Dogs killstreak should probably keep quiet about it. We’d rank World at War below Black Ops, Modern Warfare and its sequel in the all-time greats, but on balance this is the best World War II Call of Duty of the lot. 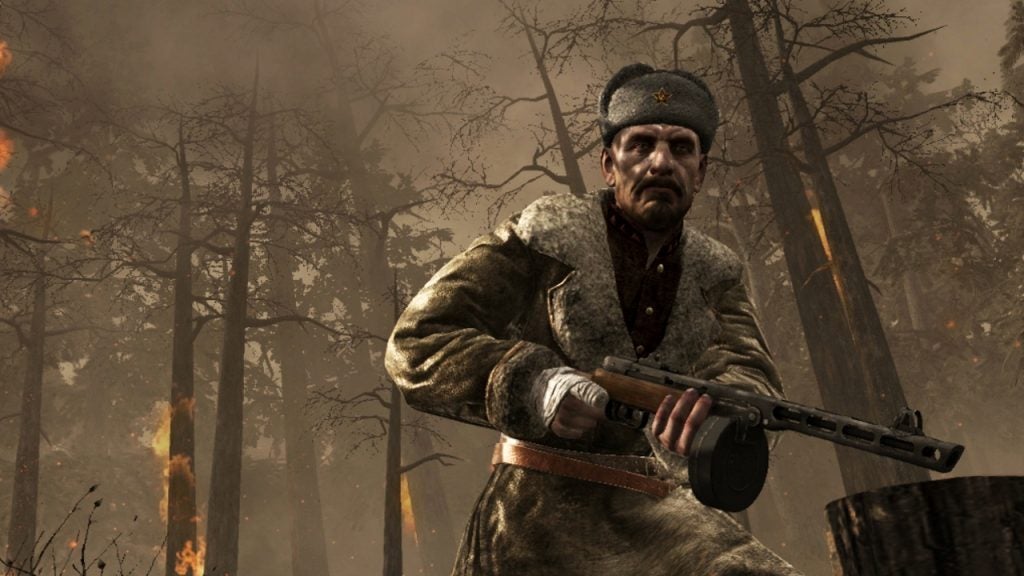 Call of Duty: World War II (2017)
Xbox One, PS4, PC
But will it stay that way? Two things make us really hopeful about this year’s Call of Duty. Firstly, it’s attempting to recapture that gritty, hard-hitting, ‘boots on the ground’ feel of the classic Call of Duty games, before the series got caught up in James Bond spy jinx, jetpacks, cyber-warfare, robotic limbs and wall-running manoeuvres. We’re back to stories grounded in history, terrifying battles and combat that makes you feel like a flesh-and-blood grunt, not some futuristic super-soldier. Secondly, it’s being developed by Sledgehammer Games, who brought us what I would call the best Call of Duty of the current console generation, 2014’s Advanced Warfare.

The studio is promising a ‘brutal and intimate’ take on World War II, faithful to the experiences of those who fought it, though we can expect a level of action hero thrills. And while we were a little bored of mud, bunkers and beach landings after years of Call of Duty, Medal of Honor and Brothers in Arms, the time is ripe to see some of those epic set-piece battles once again, reimagined for a new console generation. What’s more, we’re going to get a new, more horrifying style of Zombies plus – of course – a back-to-basics multiplayer mode.

We had some mixed feelings about this after the beta – we loved the style, not so much the maps – but we’re keen to see how the revamped War mode transforms the action and get to grips with the full set of maps. It’s high time Call of Duty rediscovered what originally made it great. In just a few days time, we’ll find out if the return to World War II has put the series back on top.