How does Wi-Fi Calling work? We explain why EE’s new service is good news for iPhone 6 and Samsung Galaxy S6 owners

In recent weeks, EE has kicked off its Wi-Fi Calling feature with the promise of fewer dropped calls and less reliance on flaky mobile networks.

So what is Wi-Fi Calling, and when will you be able to benefit from it?

Wi-Fi Calling is, very simply, the ability to make mobile phone calls over a Wi-Fi connection rather than over your mobile network.

Haven’t we been doing that for years?

Of course, we’ve been doing something fundamentally similar for years now, using VoIP apps such as Skype and FaceTime. Three and O2 have also provided their own so-called Wi-Fi Calling services that let you use a Wi-Fi connection to make calls.

But EE’s Wi-Fi Calling is different. Here, Wi-Fi calls are seamlessly integrated into your general usage, and thus are indistinguishable from regular calls.

You don’t need a stand-alone app, and you don’t need to deliberately select an option every time you want to make a Wi-Fi call. It automatically detects which option is best each time you make a call. It just works.

It works for texts too

The same principle works with text messages, too. If you can’t get a sufficient mobile signal to send an SMS, your compatible phone will be able to switch to a Wi-Fi connection to complete the task.

While plenty of us experience poor mobile network performance in our own homes, though, most of us have broadband access. This Wi-Fi Calling system capitalises on that face to ensure that your smartphone is always usable at home.

Besides which, Wi-Fi Calling will hopefully ease the load on the overworked mobile network towers in our major UK cities, and you’ll finally be able to make calls on the Tube (Wi-Fi hotspot permitting) like this bloke.

SEE ALSO: What is VoLTE? 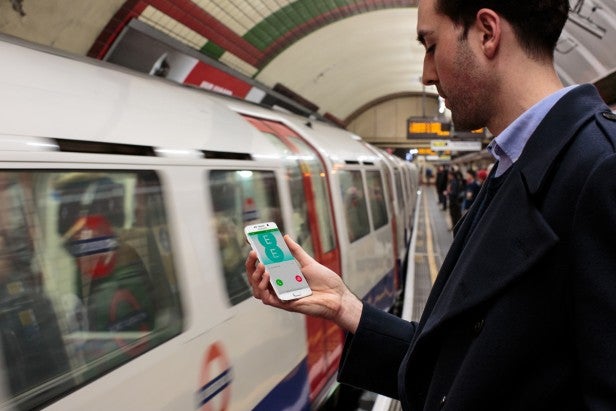 Which phones are compatible?

At present, you can take advantage of Wi-Fi Calling on any iPhone from the last few generations – so that’s the iPhone 6, the iPhone 6 Plus, along with the iPhone 5S and iPhone 5C. That’s as long as you’ve updated to iOS 8.3.

Going back to Samsung, EE has published details on how to activate Wi-Fi Calling on the Samsung Galaxy S5. It simply involves updating to the latest software.

It should be noted that you’ll need to have obtained your phone through EE – buying an unlocked, SIM-free model and putting an EE SIM card in won’t work.

How to set EE Wi-Fi Calling up

If you have a compatible handset and you haven’t received a text message about
EE Wi-Fi Calling already, just text ‘wifi calling’ to 150 to set it up. It
can sometimes take a few hours to activate.

What about the other networks?

As we’ve discussed, only EE
has this Wi-Fi Calling feature at present, with O2 and Three offering
distinctly less advanced implementations.

We can expect both to jump aboard the seamless Wi-Fi Calling train, however, and Vodafone has also announced that it’s working on something similar to EE’s implementation for “Summer 2015”.

It sounds pretty ideal, but EE’s Wi-Fi Calling offering isn’t quite perfect yet. The main issue here is that you can’t start a call on a mobile network and continue it seamlessly on a Wi-Fi network, or vice-versa.

Such a feature is in the works, but we’ll have to wait for EE’s 4G voice calling service – or VoLTE – to kick off for that to become a reality. Right now, all voice calls occur on creaky old 2G and 3G technology, which simply isn’t up to the task.

Also, don’t start getting ideas of placing cheap calls home from a handy cafe whilst on holiday abroad – this is a UK-only offering for now.

iPhone users should also note that activating Wi-Fi Calling will disable the Continuity feature that enables you to take calls across your Apple devices when on the same Wi-Fi network.

Another quirk (we’d struggle to call it a flaw) is the lack of hold beeps if both parties are using Wi-Fi Calling.

Have you started using EE’s Wi-Fi Calling? Let us know what you make of it so far in the comments section below