Twitter has launched its curated news service, ‘Moments’, in the UK today. Available in the US since November, the service brings together the best of news from around Twitter.

But do we really need another news aggregator at a time when news curation apps seem as ubiquitous as the stories they bring together? Well Twitter says yes so you better get up to date on how it all works. Luckily, we’ve sorted that for you.

The new service is available through the Twitter app for both iOS and Android and through Twitter’s desktop site. It lets users stay up to date with the latest developments, events, and trending topics without having to follow tonnes of users.

You can find Moments by clicking or tapping the Moments lightning bolt tab on Twitter.com or in the Twitter app. You’ll see a guide listing all the current moments.

If you’re in the UK, you will get content tailored specifically for your location, but that doesn’t mean you won’t get stories from elsewhere such as the US. As Jo Geary, who runs Moments in Europe, the Middle East, and Africa, explained at the launch event: “You probably won’t get baseball, you might get a bit of Trump.” 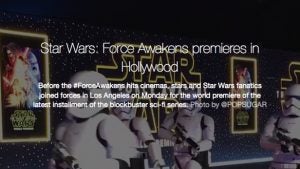 The stories that appear on Moments are sourced by a dedicated team of Twitter employees who trawl the Twittersphere for breaking news. According to Geary, the team all have journalism backgrounds. As well as this, various media partners, reportedly including Buzzfeed, will provide Twitter with content to post on Moments.

The stories will appear on the Moments tab as specific topics. So, for instance, on launch day there was a story for the Star Wars: The Force Awakens premiere. If you clicked on that ‘Moment’ you would be taken to a page full of tweets and updates from both major media outlets, such as Sky News, and lesser-known accounts which may have posted some interesting footage or pictures from the event.

Once you’re in a specific ‘Moment’ you can interact with the content as you would with regular tweets. Reply, retweet, and like are all available from within the page itself.

There’s a menu on the left where you can select moments categorized by News, Sports, Entertainment, and Fun. You can also follow a particular ‘moment’ if you see the Follow button. This means that tweets from that topic will appear in your timeline as they get added to the Moments page. These tweets will have the lightning bolt icon next to them so you can distinguish them from regular tweets.

What kind of stories will I see on there?

You can expect an interesting mix of major news stories and Twitter-specific events. As of today, we’ve had stories on Major Tim Peake’s space launch, the Star Wars premiere, and a Twitter project where fans were asked to create a short story in 140 characters.

There’s also a ‘Moment’ for #traveltuesday which brings together content related to Italy’s Amalfi Coast, and another which collates user’s photos of their dogs.

When is it available?

The UK version started rolling out on December 15. Twitter told TrustedReviews that it should be available to everyone in the country by the end of the day. As mentioned, Moments has been available in the US for a month or so and the company stated at the launch that they hope to bring it to other countries in the near future, although they didn’t specify any dates.