The Raspberry Pi Zero is a computer that costs just $5 (£4). Here’s exactly what it can do and how it compares to the other Raspberry Pi setups.

Discussions of the most affordable computers in the world used to involve hundreds of pounds. Now that figure is in single digits following the announcement of the Raspberry Pi Zero.

Let’s take a closer look at all of these points.

Putting is as simply as possible, the Raspberry Pi Zero is an incredibly cheap, incredibly small computer. This has been illustrated perfectly by the officially released picture published above, which shows the device sat alongside a US $5 bill.

On the one hand, that’s how much the Zero costs – just $5. Here in the UK it costs just £4, or the price of a pint of beer. But it’s also worth noting that the $5 bill physically dwarfs the Raspberry Pi Zero.

At 65mm x 30mm, the Zero is smaller than a credit card, and it’s only 5mm thick to boot. It also weighs just nine grams.

So cheap and small is the Raspberry Pi Zero that the Raspberry Pi Foundation is giving them away with the 40th issue of its official magazine, MagPi, which is in all good news agents now (if you’re lucky). Failing that, check out The Pi Hut for a more straight-up purchase – but be prepared for a wait due to high demand. 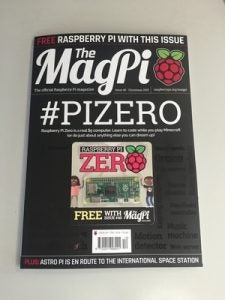 Just because the Raspberry Pi Zero resembles a tiny circuit board, don’t think this means it’s lacking in grunt.

Okay, so compared to your average desktop PC, laptop, or even mid-range smartphone it’s not particularly powerful. But it holds its own against the rest of the Raspberry Pi range, and these are machines that are significantly larger and more expensive.

In fact, the Zero runs on the exact same single-core Broadcom BCM2835 CPU as the first Raspberry Pi. However, that chip has been clocked higher to 1GHz, so it’s actually 40 percent faster than the original.

When you factor in the 512MB of RAM that the Zero has, it actually turns out to be around three times faster than the original Raspberry Pi overall.

In order to get to that low low price, the Raspberry Pi Foundation has had to strip the Zero back to its bare essentials. As such, it’s not exactly laden with luxury connectivity options.

The Zero features a single mini HDMI port, which is a reduction from the full HDMI port on previous Raspberry Pi devices. Despite this, it’s still capable of outputting video at 1080p and 60fps.

There are two microUSB ports, one of which handles the Raspberry Pi Zero’s power (just use a standard phone charger), while the other acts as a USB out for hooking up a keyboard, mouse, Wi-Fi dongle, or some other peripheral.

That’s right, there’s no Wi-Fi as standard – and nor is there an ethernet port. You’ll have to make those internet connectivity arrangements yourself, but that’s kind of the whole point of this bare bones DIY machine.

Finally, you get an unpopulated 40-pin GPIO header (as you do on all other Raspberry Pi models) and an unpopulated composite video header. You can solder on your own interface components using these if you so wish, which is where the Raspberry Pi’s immense potential and flexibility really come to the fore.

Related: 10 brilliant things you can do with a Raspberry Pi 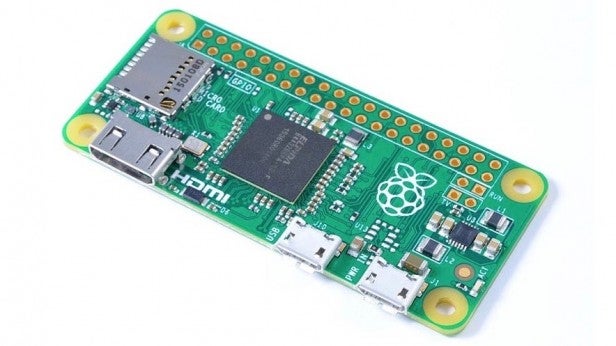 Another hardware point that worth pointing out that the Raspberry Pi Zero lacks any form of fixed storage – another vital cost-saving measure.

Rather, you must supply your own storage in the form of a microSD card, which can be inserted in the supplied slot.

The Raspberry Pi Zero runs Raspbian, just like other Raspberry Pi devices before it. It’s a lightweight operating system based on the open source Debian OS.

Besides being free to download, Raspbian also grants access to the Pi Store, which is essentially an app store filled with thousands of ‘packages’ that have been written specifically for Raspberry Pi hardware.

Given the Raspberry Pi Zero’s competent hardware, as discussed above, many of these packages will run just fine on it.

What can you do with it?

While the Raspberry Pi Zero can be set up to run like a standard (albeit bare bones) desktop computer, that isn’t really the point. Rather, it’s intended to be used as an educational tool for those who wish to learn to program. It’s also intended to be modified and customised for specific tasks.

For example, with the addition of an inexpensive camera module and a GPS module, the Raspberry Pi Zero could be attached to balloon and set off to track its journey. A more down-to-earth application would be to set the Pi Zero up as a living room media server, or to set up the Pi to play old emulated video games.

The potential applications really are staggering, and far more reliant on your imagination, ingenuity, and hard work than the contents of your wallet. Check out some more project suggestions here, or take a look at the following article for inspiration.

What are your thoughts on the RaspBerry Pi Zero? Let us know in the comments section below.