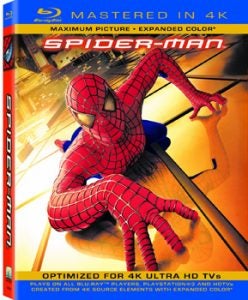 Extras on mastered in 4K disc: None

It seems a bit bizarre that the roster of just eight current Mastered in 4K format movies should include two Spider-man origin films. This merely adds to the sense of randomness that already pervades the Mastered in 4K collection.

Also potentially causing the Mastered in 4K version of Sam Raimi’s Spider-Man is the fact that the picture quality of the standard release is mostly very strong. Images are unusually noiseless, and enjoy a rich, natural colour palette. Interiors aren’t handled as successfully as exteriors though, exhibiting a slightly narrow contrast range and more noise. Colours look slightly muted with internal shots too, occasionally giving the film a surprisingly dated feel.

Thanks to this the expanded x.v.YCC colour palette of the Mastered in 4K version is able to make its presence felt right from the off, giving interiors in particular a more dynamic finish and a greater sense of image depth. There’s a touch less noise with these sequences too, contributing to a slightly crisper overall feel. The Mastered in 4K Spider-man still feels a touch softer than most of the other 4K titles covered here, though, and there’s still a slightly dated feel to the contrast.
Certainly the image feels like it’s from a generation behind that of the rebooted Spider-man.

Raimi’s Spider-man opener has a solid fanbase and is a good film overall, with plenty of dazzling visual set pieces, so we can see the point of the Mastered in 4K version. However, while the film definitely looks better on the Mastered in 4K disc than it ever has before, yet again we question whether the benefits really justify the loss of all the extra features found on the standard release. 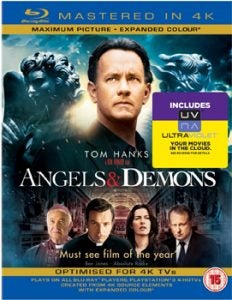 Special features on Mastered in 4K disk: None

Again we have to wonder right away if cinephiles are really falling over themselves to get their hands on a Mastered in 4K ‘refurb’ of the decidedly average adaptation of Dan Brown’s page-turner (a rare mis-step for the usually dependable Ron Howard). But it’s here, so we might as well have a look at it!

As with some of the other titles considered here, the original release actually sets a pretty high visual standard, with its contrast in particular being exceptionally good for a Blu-ray. The original release is also a detailed, crisp looking affair, boasting rich but natural colours, good motion clarity and minimal noise.

It comes as quite a surprise, then, to see an instantly noticeable improvement with the Mastered in 4K version. The main improvement once again is a more richly saturated and dynamic colour palette, but there’s also clearly even more detail to be seen in dense shots like those of the CERN equipment in the early sequences.

Overall the Mastered in 4K version delivers one of the most marked improvements with Angels and Demons of any of the titles we’ve looked at. It’s just a shame the film again struggles to justify the effort that’s gone into its remastering. And again, of course, choosing the premium picture quality option does cost you a solid roster of extra features. 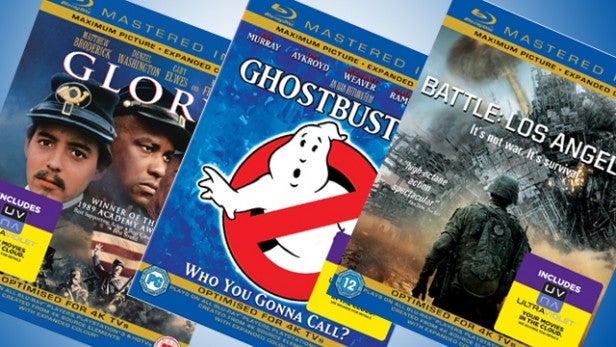 Should you buy Mastered in 4K Blu-rays?

If you don’t have a 4K TV, we’d probably say the answer here is no. Our own tests show that while there is an improvement when watching these discs on normal HD TVs, it’s much less potent than it is on a 4K set. So it’s not really worth the extra cost and loss of extra features.

If you have a 4K TV, the decision is more complicated. Especially a Sony 4K set, since somewhat contrary to our rather cynical expectations there really does seem to be something to the claim that the Mastered in 4K titles (which all come from Sony’s own movie library) sync better with Sony’s upscaling systems.

It’s certainly true that in every single case the Mastered in 4K version can be considered to be the definitive version in picture quality terms, even if the difference is sometimes slight. This is really no more than you would expect considering that we found the Mastered in 4K releases using on average around 10Mbps more picture bandwidth than their standard Blu-ray releases.

The biggest picture quality improvements appeared in Ghostbusters, Angels & Demons, Glory and Sam Raimi’s Spider-man, so we guess if you’re really big fans of these movies and you have a Sony 4K TV or, even better, a Sony 4K projector, then you might want that nth degree of extra picture prowess.

Overall, however, we’re not convinced the Mastered in 4K idea can be considered a rip-roaring success. Sure, using 4K mastering and, especially, x.v.YCC colour coding does make the Mastered in 4K versions of all eight titles the absolute best-looking versions currently available.

However, you need a Sony or, at a stretch, Samsung 4K TV or projector to get the full benefit of the Mastered in 4K quality, and even then with at least half the discs we’ve looked at the improvement is arguably not substantial enough to justify forgoing all the lovely extra features found on the non-Mastered in 4K releases.

With this in mind it would really help the Mastered in 4K case if they started shipping second discs containing all the features lost as a result of using all the main disc’s capacity to improve picture quality.

There are other problems too, though. Not least the rather random nature of the films selected for the Mastered in 4K treatment (Battle: Los Angeles? Really?); the potentially confusing existence of quite a few of other titles in the Blu-ray world that have been derived from 4K masters but which don’t wear the Mastered in 4K livery (Captain Phillips being a recent example); and, of course, the fact that all of this Mastered in 4K stuff is quite clearly only a stop-gap measure – and a potentially consumer-baffling stop-gap measure at that – to try and make us forget that the Blu-ray Association still hasn’t got its 4K arse in gear yet.

The bottom line? Mastered in 4K does make a difference, just not enough of one.

Next, read Ask The Expert: Plasma TV vs 4K TV, which one should I buy right now?