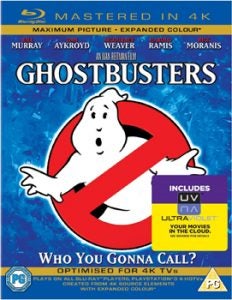 Special features on Mastered in 4K disc: None

This should be a pretty easy job for the Mastered in 4K disc, since the picture quality on the normal version is pretty unimpressive. It’s soft, weirdly muted in the colour department and very noisy in places – especially in dark areas. The image’s contrast feels a bit inconsistent, too. Overall, it’s hard not to feel as if someone just pressed the ‘mastering’ button and wandered off, with no frame-by-frame analysis and adjustment.

Scene in new quarters at 15.50 is a great example of noise especially in Murray’s suit and Ramis’ jumper. There’s colour instability in the slimer sequence and lots of noise and softness in corridor walls here, too.

Having reminded ourselves of these issues by watching the original disc again, switching to the Mastered in 4K version does indeed yield an immediately obvious improvement. Right from the film’s opening shot the picture looks slightly crisper and much more richly coloured. Both improvements are particularly apparent if you look at the books in the library basement, but throughout the film you can see more detailed in the texture of clothes, faces, bricks etc. And the green of the slimer and the red of the Ghostbusters logo are far more strident too, if you’re looking for particularly easy points of reference.

It’s also quickly apparent that noise in the picture is greatly reduced. A strong example of this in action can be seen as the Ghostbusters first check out their new fire station HQ, with much less fizzing over Ramis’s jumper and the background walls of the building.

There’s also more contrast in the Mastered in 4K transfer, especially at the upper end of the light spectrum, as outdoors shots have much more dynamism.

Just occasionally the Mastered in 4K process seems to cause a little artefact, such as some moiré noise on the paw of the statue during the film’s opening shot and over the fence posts outside the library.

Overall, though, Ghostbusters gets the Mastered in 4K format off to a compelling start, delivering a very clear picture improvement. Yes, we miss the extra features on the standard release, but with a classic movie like this we can well imagine film fans being attracted first and foremost to the version that delivers the best picture quality.

And that is the Mastered in 4K one. 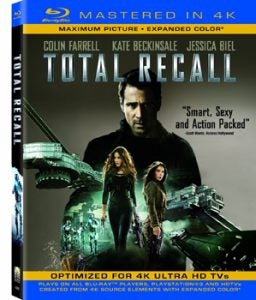 Special Features on Mastered in 4K disc: None

The first thing to say here is that the amount of extra features you have to sacrifice for the 4K visuals really is pretty extreme, putting more pressure on the picture quality to really excel.

This is one of those instances where the 4K version has been created from 4K native photography (except for the SFX, which as usual with ‘4K’-shot films right now were only rendered in 2K). And there’s no doubt again that the picture on the Mastered in 4K version is better. The standard version is noticeably softer, especially over distance shots of the CGI cityscape, with a reduced colour palette, and there’s slightly less detail and texture.

However, the differences are not nearly as pronounced as they are with Ghostbusters. Especially as the non-4K version of Total Recall doesn’t suffer with noise in any serious way.

Overall, while there’s no denying that the Mastered in 4K version of Total Recall is one of the very best Blu-ray pictures we’ve ever seen, the differences between it and the normal Blu-ray version aren’t quite pronounced enough to convince us that we’re happy to forego the extensive, well-crafted extra features on the normal Blu-ray, especially as the film isn’t really good enough to bring out the film aesthete in us.

In fact, some of the special features on the normal Blu-ray are arguably more fun than the film itself! 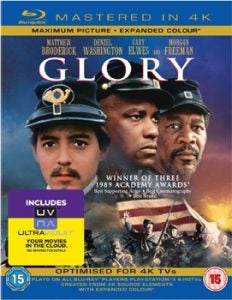 Extras on 4K version: None

Unlike Total Recall, the 1990 Civil War epic Glory really is an excellent film – precisely the sort of film the movie lover in us wants to see get some special picture quality treatment.

This is especially true in Glory’s case because the original Blu-ray release isn’t anything special on the picture quality front, despite it being released as a ‘two-disc special edition’. All too often something about the original release’s colouring, contrast and motion reproduction makes it feel more like a TV show than a cinematic experience.

The original release is a bit inconsistent too, with many exteriors looking quite soft, noisy and slightly washed out, while some more close-up shots look very crisp and impressive. There are moments where noise gets rather excessive too.

Turning to the Mastered in 4K version, there’s a pretty obvious improvement- especially when it comes to colour, which enjoys a more richly saturated palette that helps reduce the dated, made for TV feel of the non-4K version. The film’s flags look bolder, the battlefields look greener, the uniform detailing is more striking. There’s also noticeably more contrast range, at least at the upper end of the spectrum.

Detail levels are marginally improved, but not perhaps as significantly as we might have hoped, and there’s slightly less noise – though again, this isn’t quite as significant a step forward as we would have hoped.

Crucially, though, the differences are enough overall to tip the film from looking like it was ‘made for TV’ to looking like a real movie.

While the picture quality makes a compelling case for Mastered in 4K discs, though, again we have to say that we really missed the extra features found on the normal Blu-ray, which are substantial and, in many cases, interesting. So overall we’re looking at a sort of score draw here, with the way you lean depending on what you value most about Blu-ray: features or picture quality.