Intel Optane 3D Xpoint is set to bring about a sizeable boost in PC performance. Intel is calling it “the first new memory category in more than 25 years,” so it’s no small deal.

So what exactly is Intel Optane 3D Xpoint, how does it work, and when will we see it in our computers?

Intel has pretty much sprung this revolutionary technology on the tech world from out of nowhere, and it’s remained somewhat vague on the specific details, but this is what we know so far.

Get to the Xpoint

Optane is actually the brand name for Intel’s new range of storage devices, platforms and the software that supports its new 3D Xpoint memory technology.

The technology itself was jointly developed by Intel and Micron, but both companies are marketing their own commercial products based on that collaborative effort.

Thanks for the memories

Let’s back up a little. There are two basic kinds of memory storage on a computer. There’s system memory (DRAM), which is very fast but can only store data short-term. This is where a computer stores current programs and temporary data that is needed in the moment.

Then there’s the computer’s hard drive or solid-state drive (SSD), which serves as its long term memory. This holds and retains all of a computer’s data for long spells, but the downside is that it’s relatively slow to access.

Intel Optane 3D Xpoint essentially promises to combine the strengths of both sorts of memory – the speed of the former and the permanency of the latter. Though in actual fact, it’s a completely new technology. 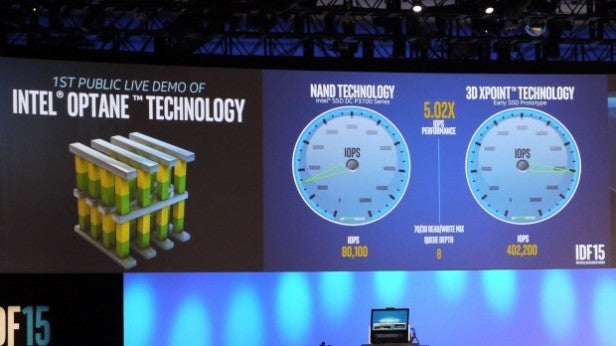 So what is Optane 3D Xpoint?

Optane 3D Xpoint is a brand new memory technology the underlying technology of which is of up to 1000 times faster than the NAND memory used in SSDs (and many times faster again than hard drives).

In practical terms, the first generation of Optane 3D Xpoint drives will be around five to seven times faster than the quickest SSD currently in operation.

Although this is still slower than DRAM it is close enough that in certain applications it will be fast enough to eliminate the need for DRAM altogether.

What’s more, the memory also lasts 1000x longer than NAND, which slowly degrades over time as it is written to and erased multiple times.

Intel’s new technology uses a multi-layered cross-point structure of metal wires that are joined by pillars of an undisclosed material, which is what stores each bit of data.

While traditional DRAM and NAND relies on the storage of electrons (using capacitors in DRAM and transistors in NAND) for retaining data, Optane 3D Xpoint instead changes the physical properties of those pillars.

This means it isn’t affected by any process that might draw those electrons away, which is why it lasts so long.

The speed comes from the fact the physical state can be switched quickly and the sheer density and efficiency of the multi-layered, cross point layout. 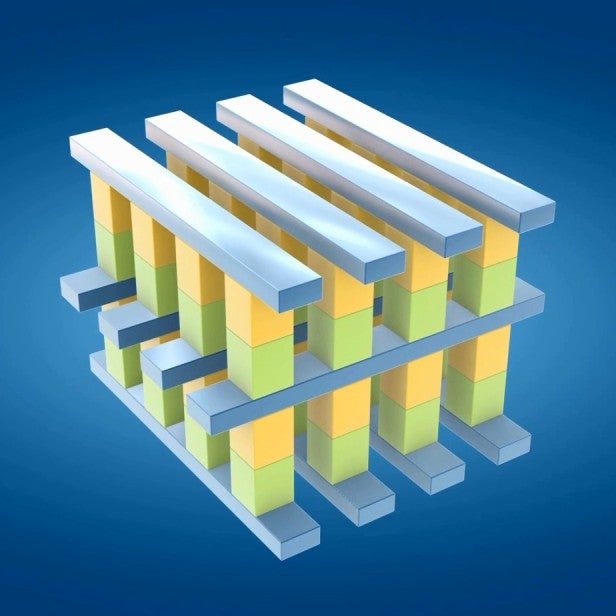 Such fast data access will have a sweeping effect on computing in general, but the most obvious beneficiary in the consumer space will be games.

With this kind of memory, there’ll no longer be any need to load levels into memory a chunk at a time – the processor will simply be able to access the data almost instantly straight from storage.

This will also bring about the end of level loading screens – something that still plagues modern consoles. In fact with the massive bump up in detail in these games, it can often take even longer to load in the content. With Optane 3D Xpoint, that’ll be no more.

Oh, and those occasional pauses that you often notice in games as you move between different environments? Gone.

Gamers won’t see the full benefits of 3D Xpoint memory for a while, though. Of course, the speed benefits will be pretty much instant, but it will take a while before the technology becomes ubiquitous enough for developers to build their games with the technology in mind – especially with a new generation of consoles (always a key driver in gaming) still a good few years away.

When will it arrive?

3D Xpoint memory is set to arrive in 2016, as a straight up replacement for traditional SSDs. You’ll also see it appearing in everything from laptops to servers next year.

It will also be available as a DIMM module for use in high performance computing applications, which is where it can potentially be used to replace current system memory some time in the future. Initially, however, that will just be for specialist data centre use.

Are you excited by the sound of Intel’s Optane 3D Xpoint? Let us know in the comments section below