Project Wing has popped up in the news over the past few days, but what exactly is it? We take at look at how Google hopes to change the way you get your groceries delivered.

If you thought Amazon was the only company working on delivery drones, think again. Google’s Project Wing may not be as high profile as the online retailer’s efforts, but it looks to be similarly advanced.

So what’s the story behind Google’s Project Wing?

Here’s everything we know so far.

Google’s Project Wing was officially announced in August 2014. At the time of its announcement, the drone program was already well into the testing phase.

In fact, it turned out that Project Wing had been under development at the top secret Google X labs (the ‘Moonshot’ department that’s also working on driverless cars) for two years by that point.

Having said that, there were signs that Google was working on something drone-shaped prior to Project Wing’s unveiling. In April 2014, for example, it emerged that Google had purchased Titan Aerospace, a small drone company that was being chased by Facebook

Upon Project Wing’s announcement last year, a video was released of Google’s drone flying dog food to an Australian farmer (no, really), showing just how far along the project was.

You might be asking a perfectly understandable question at this point. Since when did an internet company have a burning need to deliver anything?

Amazon, of course, has the world’s biggest online retail operation, so a quick semi-automated delivery system is a natural thing to invest in.

While such deliveries are a stated possibility here, Google has rather more noble goals with its own drone program. It was initially conceived as a means to shuttle defibrillator kits to people having heart attacks.

The company’s long term goal for Project Wing is to provide disaster relief by delivering supplies to remote areas affected by floods, earthquakes, and other natural disasters.

“Even just a few of these, being able to shuttle nearly continuously could service a very large number of people in an emergency situation,” Google X’s Captain of Moonshots, Astro Teller, told the BBC last year.

Related: Flying a drone: Everything you need to know 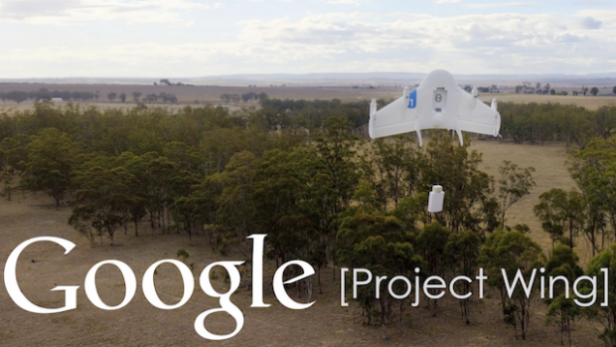 This time last year, the Project Wing drone resembled a more traditional flying wing aeroplane design, complete with a five foot wingspan. This could take off and hover like a helicopter by facing ‘up’ with its four propellers pointing into the air, flattening out in flight.

The ability to hover was an essential part of the whole delivery drone concept, as packages were delivered on a winch system.

However, at the South by Southwest festival back in March, Teller revealed that Google had scrapped this wing design because it was difficult to control – particularly when hovering in high winds. In fact, the team was already working on a new design at the time of that initial Australian test.

Recently we’ve seen that new design in action via a non-official video. The design of the drone, if not the core principles of the project, has changed markedly.

Now the Project Wing drone looks a little more like a classic quad-copter drone – the kind you see amateurs bothering fire crews and wildlife with, albeit significantly larger and with a spindly winged framework. Perhaps tellingly, it also looks more like Amazon’s Prime Air solution. 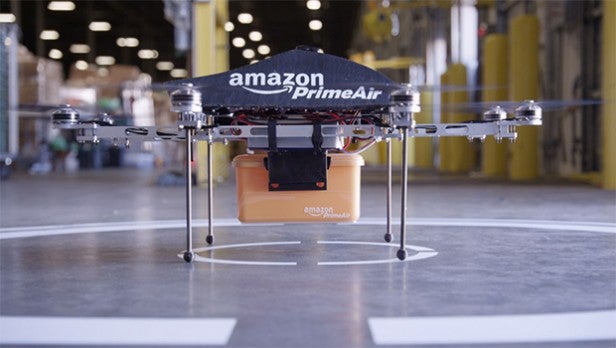 Little is known about the current status of Project Wing, but Aaref Hilaly of Sequoia Capital (who posted the aforementioned video of the latest drone in action) claims that the drones can cover five miles in five minutes. Pretty swift.

Google’s Project Wing drones are to be capable of manual remote as well as entirely autonomous flight. In the latter case, an operator would simply need to supply delivery coordinates to the drone.

What’s the hold up?

The thing that’s holding up drone delivery systems such as Google’s Project Wing and Amazon Prime Air is legislation.

There is much debate and controversy surrounding the governance of remote and automated drones, with neither company able to test their projects on native soil owing to strict US rules on the matter.

Amazon is pushing for a “high-speed transit zone” where drones can fly between 200 and 400 feet above the ground. It also proposes a centralised tracking system and  an agreed standard for such drones to be able to communicate with one another.

Expect both projects to accelerate rapidly once the US government revises its rules on automated drone usage in populated areas.

What’s your take on Project Wing? Let us know in the comments section below.