What is Google Now on Tap? We explore one of Android Marshmallow’s biggest new features heading to smartphones and tablet in the near future

With the new LG Nexus 5X and the Huawei Nexus 6P  hardware finally announced, it’s easy to forget that Google has some exciting new software features on the way too.

We’d argue that none of those Android 6.0 Marshmallow features is more thrilling than Google Now on Tap, a new enhancement to the core Google Now tool that was revealed back in May.

So just what is Google Now on Tap, and how will it improve your life when Android 6.0 Marshmallow hits.

Google Now on Tap is essentially a refinement of the existing Google Now tool, which provides even more intelligent feedback based on what you’re doing at the time.

The example Google provided in announcing the feature was of someone listening to Skrillex on Google Play Music. Simply by asking ‘What is his name?’, On Tap was able to discern who and what the user was talking about and provide an accurate answer (it’s ‘Sonny John Moore,’ in case you were wondering).

This level of machine learning is much deeper and more personal than the existing Google Now tool, which operates on a more general range of data points like location, predefined tastes, and browsing history. 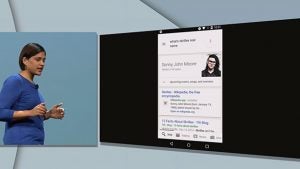 Context-based information is grand, but Google Now on Tap is about more than that. It also appears to pro-actively supply the information and options you might need.

For example, if you receive an email from a friend casually mentioning a film to go and see, Google Now on Tap will be ready with information on the movie and booking details.

It even recognises when you might want a reminder setting based on information provided in such emails. Mention of a restaurant, meanwhile, will supply you with an appropriate booking card.

Of course, as we’ll discuss later, Google Now on Tap isn’t actually pro-actively keeping track of your every activity in the background, but it should essentially feel like it is.

So Google Now on Tap is clever. We get that. But it’s also more deeply engrained in Android than any previous iteration.

Google Now has always been a smart but noticeably distinct app sat on top of Android. There are a few set ways to access it and the information it provides – whether through a sideways swipe on the homescreen or a press and hold of the Home button – but this has always been distinct from your other activities.

With Google Now on Tap, the experience is embedded deeply in Android. Its contextual commands necessitate that the service is saturates Android in order to be aware of and respond to what you’re doing at the time.

It’s accessed by pressing and holding the Home button, which of course is permanently accessible throughout Android. 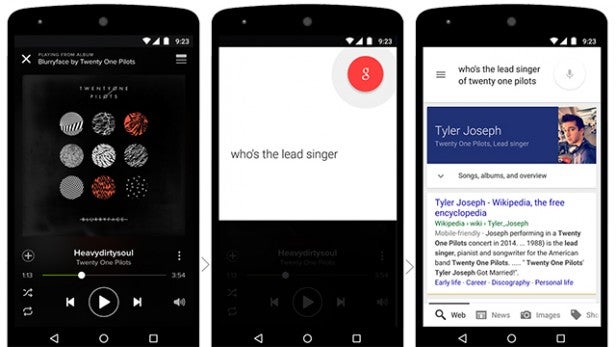 Many people have noted that Google Now on Tap is a little creepy. That Google is essentially spying on your smartphone activities.

In a sense, that’s true. After all, On Tap responds to whatever is on your screen at the time, including emails, web pages, and more.

On the plus side, Google’s refined assistant will always sit silently in the background waiting for you to summon it with the aforementioned home button prompt. It won’t volunteer or push functions that it thinks you might want, and it’s not accumulating data in the background.

What’s more, after your information has been harnessed for a Now on Tap recommendation, it will be dismissed rather than held on file in the cloud for later reference. In other words, there’s no ‘internet history’ to Google Now on Tap.

Apparently, Google is also working on a way to omit sensitive information from Now on Tap’s remit. In other words, it won’t take note of your bank account details.

Still not comfortable with the prospect of Google’s spookily aware new Now on Tap tool? Then you’ll be able to opt out of.

Are you fan of Google Now? Are you looking forward to trying out Google Now on Tap? Let us know in the comments section below.