Google Fit explained: How good is the Apple Health rival?

The digital world’s obsession with tracking fitness and health statistics shows no signs of slowing down, and both Apple and Google now have platforms devoted to measuring and displaying every breath we take.

They’re mainly frameworks intended for apps to jump on board and display data in conjunction with smartwatches and other apps, providing the user with a more complete picture of their health and fitness.

While Apple Health and the HealthKit are pre-installed with iOS 8.0 and beyond, Google graciously gives you the choice with Google Fit. So is it worth the download?

What exactly is Google Fit?

Google’s latest foray into the fitness market comes in the form of an app, which can be downloaded onto any Android device, and uses the sensors already built into that device to track commonly-measured fitness data. This includes steps taken, calories burned, and distance covered. 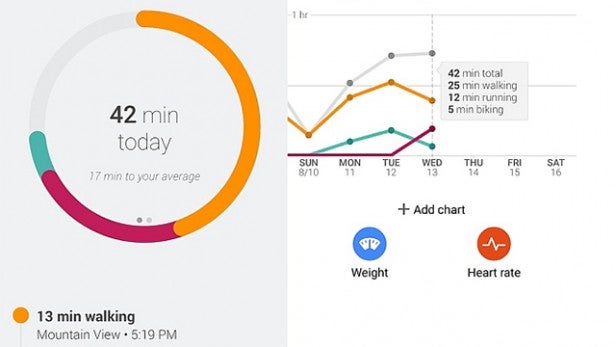 It also detects when you’re exercising, and logs your pedalling rate, calories burned during the workout, wheel speed, and time spent. All that data is translated to handy graphs and charts, and you can set personal goals as well as app-recommended goals determined by your weight and height.

How to get it

It’s a free download for all Android devices running Android 4.0 or later, including smartwatches running Android Wear, for which it has its own watch face. The home page on all is a chart which adds up your types of activity, such as running, cycling, and walking, to create an overall picture of your calories burned and steps taken that day, or week.

Fundamentally, Google Fit provides a platform with which you can do as you please: use the app’s measurements on their own, or link it up with third-party apps to create a more comprehensive picture of your daily fitness.

Once you’ve downloaded, it’ll ask you to manually enter your weight, height, and an activity goal, and then you’re done. The rest of the work is done by the app, as long as you keep it running in the background, unless you want to manually enter a new weight or workout.

Pairing up third party apps is easy, and there’s quite the range of compatible apps: Strava, Nike+ Running and Noom Coach are some of the more popular fitness apps that work with the Google Fit. The interface is classic Google: clean and crisp, with various data showing up in colour-coded bars and graphs, so it’s incredibly easy to use and determine where you need to pull your fitness socks up. 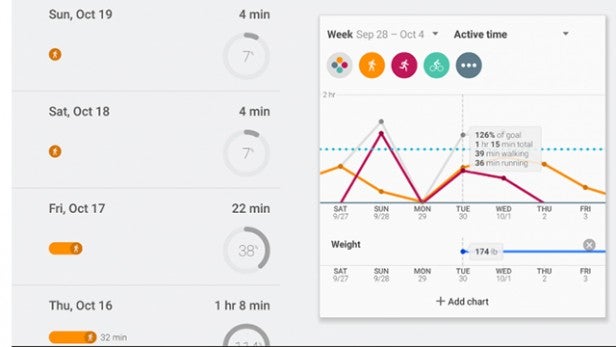 What about Apple Health?

As always, you can guarantee that where there’s a Google product, there’s an Apple offering to rival it. Apple Health and HealthKit come as standard on all iOS devices running iOS 8.0 or later, and provide a comprehensive look at your fitness and health vitals, using the M7, M8 and M9 motion co-processor that are inside every latest-gen Apple device.

This includes steps taken, calories burned, and flights of stairs climbed, alongside the capacity to log manually-entered medical data such as BMI, reproductive statistics and body temperature.

Before you even look at third party app compatibility, Apple Health already has more data categories than Google Fit, including blood type, sleep pattern, and how many times you’ve fallen over – if you’re prone to falls.

Since it’s designed with the capability to be shared with doctors to keep a closer eye on your overall health, the range of data reflects this, and you can really get to know the ins and outs of your body.

Apple also got a bit of a head start over Google, so they have over 100 compatible apps that play nicely with Health’s measurements and displays, so whatever your existing health and fitness toys, you can pretty much guarantee their data will work with Apple Health. However this list is just going to expand for Google Fit, as both apps are still in development and constantly adding new apps to the list. 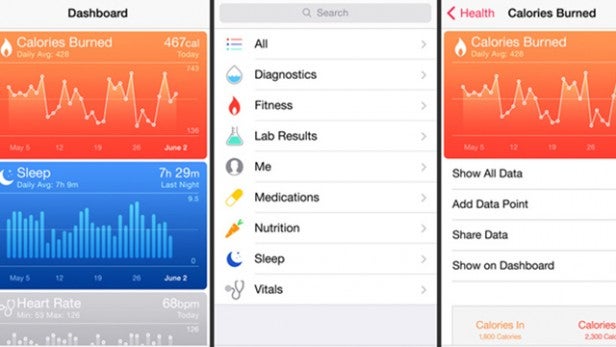 Google Fit’s own readings aren’t the most accurate available, as using a smartphone or tablet’s in-built pedometer won’t give you the best reading. The real value in the app comes from its compatibility with existing fitness trackers, such as Pebble, Withings and anything running Android Wear. Other fitness apps, like Runkeeper, are also supported, so all the data from these health apps and devices are centralised into one platform.

However you really need to be a user of a fitness tracker or app to take full advantage of Google Fit. Using your smartphone’s own sensors isn’t particularly accurate, and there’s currently no way to measure your sleep using your smartphone with Google Fit. If you’re already using several apps to measure your health and fitness, all of which are compatible with Google Fit, it’s a great platform to display all this data in one place, without switching apps to check your progress. Unless you’re already using several different apps to track your fitness, Google Fit isn’t really worth it as an independent download.

Your choice of fitness dashboard is practically pre-determined by your other devices: Google Fit won’t pair up with the Apple Watch, and you’ll have a difficult time trying to make your Moto 360 talk to Apple Health. If you’re starting from scratch, it’s worth looking at the features of the smartphone, smartwatch and fitness dashboard as a package before choosing your allegiance.

Are you a Google Fit user? Let us know your thoughts on the service in the comment box below