What is Google Cast for Audio?

Google Cast for Audio was one of the most important announcements of CES 2015. It’s a new way to stream audio, and will change the way many wireless speakers work in the future.

However, this isn’t Bluetooth, it isn’t DLNA and it certainly isn’t Apple AirPlay. So what is it?

Google Cast for Audio is a natural extension of what Google started with Chromecast, a £30 dongle that you can plug directly into your TV’s HDMI port to get Smart TV services.

However, there’s no extra hardware required for Google Cast for Audio. Instead, it’s a feature that will be built into pieces of audio hardware, such as wireless speakers, soundbars and AV receivers.

It’s yet another way to make your lounge wireless. Tired of the big wireless push of the last couple of years? Well stick with Google Cast for Audio for a bit longer, because it’s really quite interesting. 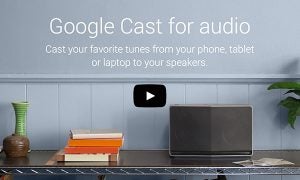 Google Cast for Audio – How does it work?

The comparison with Chromecast becomes much more important when we look at how Google Cast for Audio works. It’s a lot cleverer than it at first appears.

You control Google Cast with your phone, through a host of compatible apps, which you can be sure will fill out in no time – we’ll look at what’s available now in a bit. As long as the device you’re streaming to is connected to the same Wi-Fi network, it’ll simply show up within the app, much as it would do with AirPlay.

However, once the device has its instruction – to play an album from Google Play Music for example – it’ll do all the work. Rather than using your phone or tablet as a middle man, it’ll connect to the service directly.

This is really the best thing about Google Cast for Audio, and for most people is its most significant improvement over Bluetooth. It allows the signal to be much more consistent and means there’s no drain on the battery of your phone.

It reduces your phone or tablet’s interaction to that of a very, very smart remote control. 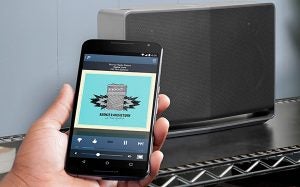 Which mobile devices can use Google Cast for Audio?

You might assume Google Cast for Audio can only be used with recent Android devices, but its support is actually much, much wider than that. Absolutely masses of devices are compatible, because just about every current device has the Wi-Fi chops to do what the system requires.

Androids running version 2.3 or newer of the software are in, as are Macs, Windows computers and ChromeOS devices using Chome, via a browser extension.

The one that might surprise, though, is iOS. iPhones, iPads and iPod touches will be able to use Google Cast for Audio as long as they’re running iOS 7.0 or newer. All they need is to get the relevant apps updated by developers.

Next to Apple AirPlay, Google Cast for Audio seems a paragon of open-ness and inclusion.

However, it’s not a real open system. There’s no word of Windows Phone support yet, and it requires harder-to-achieve compliance on the other end of the exchange, with the speaker or AV receiver.

Speaker, soundbar and receiver support for Google Cast for Audio

Google Cast for Audio needs support at the chip level, presumably to ensure compliance with the very specific wireless standards the service exploits. While it is possible that some current devices have the hardware required to support Google Cast for Audio, it sounds as though it’ll be primarily – or perhaps completely – future devices that will get to exploit it.

Why not offer backwards support? There’s little reason for most manufacturers to add it in, especially those that work on a fairly regular update cycle. Why upgrade an old speaker that’s on the way to being discontinued when it can be used as an upgrade incentive for a new model?

This is somewhat cynical viewpoint, but it seems certain that adding support for older devices isn’t going to be top priority for any speaker-maker.

Google hasn’t launched Cast for Audio without plans, though. There’s a whole gang of manufacturers signed up, meaning that much of their future wireless audio products are likely to embrace the new streaming standard.

Companies that are to start producing Cast-compatible devices include Heos by Denon, LG and Sony.

Heos by Denon produces multi-room speakers in a fairly traditional vein: they’re fairly manageable lifestyle-infused boxes. Sony and LG are likely to offer a wider range of devices, from lone speakers to soundbars.

Of course, those with an AV receiver will really want to have support through their AV hub rather than the TV. There’s currently no direct word of Cast support for receivers, although it’s likely to become standard for models that offer integrated Wi-Fi when 2015’s new models are announced.

We’ve reached out to a few of the big names and will update this article if we get any new information.

The final part of the puzzle is the app that acts as the middle man between your phone/tablet/laptop and the speaker/receiver. This is the part that we’ll see develop most rapidly, because all it needs is, we imagine, a relatively minor tweak by the app’s developer.

Many apps have already added Casting support, as it has existed in more video-centric form in Chromecast for a while. Rdio, TuneIn Radio and Plex will be of obvious interest to audio streamers.

At present music streaming big-hitter Spotify does not offer Casting, however it seems likely it will incorporate it now that it has such a music-centric side. Spotify apps for iOS do support AirPlay, so it does not seem like there’s some strange conceptual hurdle the company just can’t get over.

Is Google Cast for Audio worth upgrading for?

While we’re yet to try Google Cast for Audio with a high-end setup, it should offer better sound quality than Bluetooth and greater reliability than AirPlay. It really is a great solution.

However, the simple truth is that wireless streaming shouldn’t be the number one choice for anyone obsessed with sound quality, and a lot of smaller or more casual-use speakers are perfectly served by Bluetooth with aptX.

Need a new wireless speaker and are out for something for the home rather than a portable box? Waiting for a Cast-compatible speaker dock or soundbar isn’t a bad idea. However, it’s really a fine-tuning of features that are present in other wireless speakers, with the closest Android alternatives being the various applications of DLNA.