Facebook has announced Notify, a standalone mobile app that will deliver breaking news alerts, daily weather forecasts, movie trailers and much more to the user’s lock screen. Read on to see what Facebook has in store as it seeks to bring all of your app alerts under one roof.

The free Facebook Notify application, which has already rolled out to iOS users in the United States, will immediately rival Twitter’s new Moments tab, the Apple News app in iOS 9 and standalone aggregation apps like Flipboard.

So, how does it work? Is it any good? What are some of the pitfalls? How does it stand up against the rivals? And when will everyone be able to use it? Get comfy, we’re about to explain it all…

Much more than just breaking news

The basic idea behind Notify is to encourage app users subscribe to alerts on practically everything they’re interested in. Early reports suggested the app would be very much focused on breaking news alerts, but Notify already has a much wider scope.

As well as breaking news, categories include sports, daily weather alerts, the latest movie trailers from Fandango, clips from providers like Comedy Central, the latest local deals from Groupon, as well as fashion and celebrity gossip news from the likes of Vogue.

It’s up to the users to select which of these so-called ‘Stations’ they’d like to hear from. 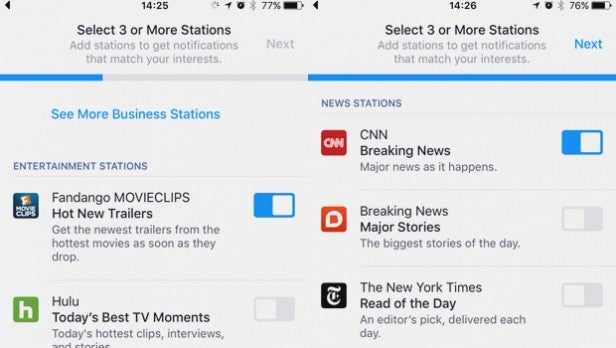 The Notify app is made up of dozens Stations, which users request to receive notifications from. There’s already loads of high profile content providers available to select from a wide range of categories. For example, if you’re in to sports, you’ll be able to subscribe feeds from: Bleacher Report, Fox, CBS, Sports Illustrated and Sporting News.

It goes deeper too. With Bleacher Report, for example, you’ll be able to tailor those notifications for specific sports, while there are individual Stations for news, rumours, highlights, trending items and fantasy sports.

Once Notify…erm… notifies you, there are several ways you can interact with the alert. It can sit there harmlessly on your lockscreen until you’re ready to deal with it, while swiping right will unlock the content within the Notify app itself.

Users will also be able to Save notifications, (which will rest in a dedicated section in the app), Share or even delete them by swiping left on the alert and tapping the option of their choice

Once you’ve downloaded the app, you’ll need to log in to your Facebook account. Then you’ll need to select at least three stations to get started. The more Stations you select, the more notifications you’ll receive. After set up you’ll be guided to your notifications feed, where your personalised alerts sit.

. Stories you’ve read fade to the background, while you can still swipe to save, share and delete from the listing. You can even turn off notifications from this app.

Tapping to bookmark icon features your saved notifications, while hitting the plus icon allows you to add more stations by choosing from categories or individual sources. 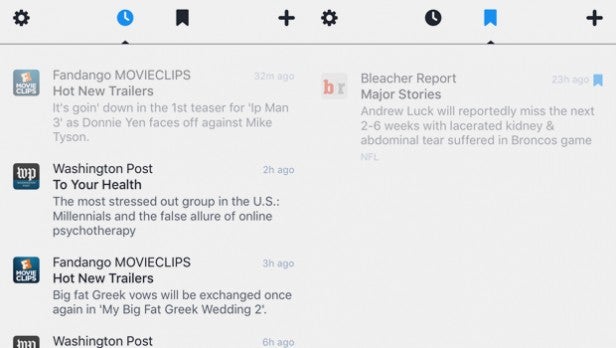 Instead of having dozens of notifications from a multitude of different applications, Facebook Notify offers extreme consolidation of your consumption habits. In many cases users will be able to delete the native apps from their phone completely and rely on Notify to bring them the same updates. This will save storage space and cut down on homescreen clutter.

There’s also the added bonus of all of these notifications being accessible within a single app. Whether it’s your daily weather forecast from the Weather Channel or the latest Star Wars trailer from Fandango, there’ll be no more rapid switching between apps.

Of course, push notifications have been around since the dawn of the smartphone era. Many device owners will already be receiving alerts from these content providers who all – every single one of them – have mobile apps.

Engagement with Notify will probably mean users will need to turn off their existing notifications to ensure they aren’t receiving the same thing twice.

Seeing as every Notify lock screen alert features the same app icon, many users are likely to prefer receiving them from individual apps, making the individual sources more recognisable at a single glance.

Arguably, it’s also more desirable to open these notifications from a native app, rather than the mini web browser

With so many notifications coming in through the same icon, the more importance stuff could conceivably be lost among. The expression, “can’t see the woods for the trees” springs to mind. 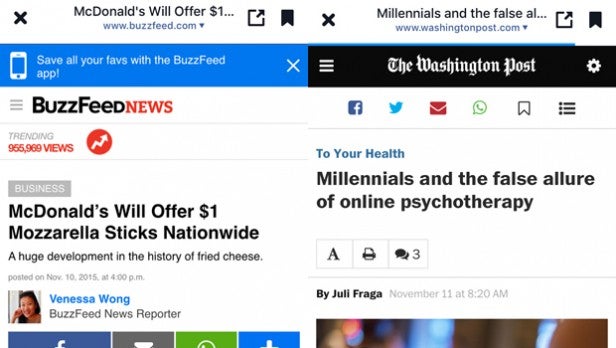 It’s an interesting time for news aggregation with Twitter, Facebook and Apple all jumping aboard in an attempt to build on early efforts from the likes of Pocket, Pulse and Flipboard.

Twitter’s approach with Moments is arguably the most digestible effort. Users can get quick summary of a breaking news or cultural event from across the Twitterverse, with media rich stories featuring curated tweets, images, Vines and videos. Apple’s News app is a more traditional approach and more similar to Facebook’s. With the News app in iOS 9, Cupertino is also working with content partners in order to bring users’ favourite sources under the same roof.

Right now, it’s only available in the US for iOS device owners, but a roll out in other territories and Android devices will follow in the not too distant future. Although Notify is a standalone app, users will still need a Facebook account to use it.

Will you be taking Facebook Notify for a spin when it arrives on UK shores? Share your thoughts on Facebook’s latest market-cornering efforts in the comments section below.