Still relatively unknown to most people, Bitcoin first emerged in 2009 as a new form of solely electronic currency. After massive growth at the beginning of 2014 the Bitcoin market has stagnated, thanks in part to the MtGox disaster, and a clamp down on some of the shadier Bitcoin vendors such as Silk Road. But despite its decline in value, and wane in popularity among early adopters, Bitcoin is starting to emerge into the mainstream.

Now accepted by more and more vendors, including the likes of Microsoft, Bitcoin is making strides in popularity, and is becoming an increasingly viable alternative to standard currency. That’s despite being named one of the worst investments in 2014.

So what is it? How does it work? And is it secure? Here’s what you need to know…

Unlike other currencies, such as the pound or dollar, Bitcoin only exists on the Internet – and can therefore only be used for online purchases. Described a cryptocurrency, Bitcoin uses complex encryption to store your balance, and even confirm and verify transactions. Much like the currency itself, the technology behind Bitcoin relies on a peer-to-peer network rather than an official authority. This means that any changes to Bitcoin must be agreed by the community, and no individual person can solely develop the currency. Technical details of Bitcoin are also agreed by the user base, so any changes must gain the support of the majority.

First envisaged as a currency controlled by a community rather than a central authority, the idea of Bitcoin was originally put forward by Wei Dai in 1998. It was only in 2009, 11 years later, that a figure going by the name of Satoshi Nakamoto created the first detailed template of a peer-to-peer currency. After the mysterious Nakamoto left the project in 2010, the task of refining the currency was taken over by an increasingly large user base. Although the largely anonymous Nakamoto is credited as the founder of Bitcoin, the currency’s current form is an advanced descendent of his earlier work. 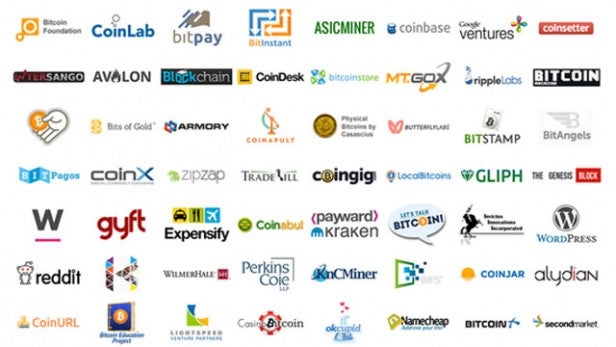 A host of companies have already added Bitcoin support

Who is Satoshi Nakamoto?

No one is entirely sure who Satoshi Nakamoto is. There have been several claims, since disproved.

Perhaps the leading contender in recent times has been Australian entrepreneur Craig Wright, who recently ‘admitted’ he was Nakamoto after several reports pointed the finger at him.

However, the evidence he supplied has since been disputed by certain sources, who claim that Wright is at best a single member of team who have all operated under the Satoshi Nakamoto handle.

How does Bitcoin work?

Bitcoin relies on a peer-to-peer community, but it operates much like any other type of money. After creating a wallet, much like Apple Pay or PayPal, users are given an address. A single-use code, addresses are similar to giving your bank details or PayPal email address to your friends before each transaction. These transactions are then processed in the ‘block chain’, a public ledger with a record of the balances of wallets. It’s this system that makes Bitcoin unique, and not reliant on a central banking authority. Responsible for updating balances and the overall location of money, it’s the block chain that forms the inner workings of the Bitcoin currency.

Transactions are deposited into this stream of numbers, with each given a unique private key corresponding to the wallet they came from. Funnelled into the block chain after every transaction, these processes usually take around 10 minutes to verify – adding another layer of security.

But who does these calculations? As you’d expect from a p2p platform, these transactions are processed by the community itself, in a process called ‘mining’. Bitcoin Miners give over their hardware to crunch equations for the rest of the block chain and are awarded with transaction fees, much like the fee PayPal or Visa takes during a purchase. Instead of going to a bank, this fee, along with some newly created bitcoins, goes back into the community. In this way, Bitcoin operates in a peer-to-peer fashion, distributing authority evenly, rather than relying on a central bank.

Thank to its strong encryption and lack of a physical wallet, Bitcoin can be considered safer than using normal money – but can still be vulnerable. Transactions can be done instantly, but their lack of processing makes them more prone to fraud or foul play. With larger sums of money, it’s often best to use the safer, longer route. Transactions are also non-reversible, and as there’s no PayPal-like authority to protect buyers, shoppers should only buy from reputable vendors.

Although not completely anonymous, Bitcoin’s high encryption and lack of a centralised authority has also led to it being the favoured payment method for more underground sites such as Silk Road 2.0. 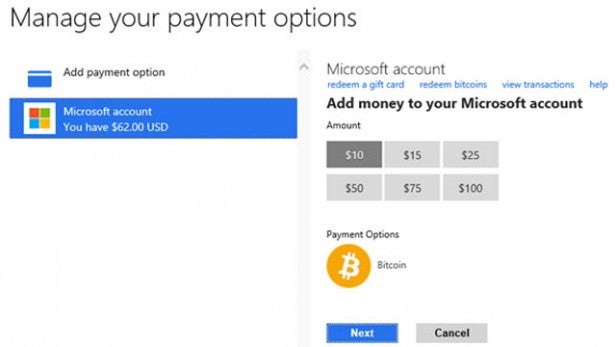 Microsoft has confirmed it’s jumping aboard the Bitcoin bandwagon

Where can I spend it?

Relatively unheard of in 2009, Bitcoin is now gaining traction as a viable payment method. After originally finding popularity in smaller, illegal markets on the dark web, 2014 has seen the currency take a step towards mainstream use. Smaller retailers such as CeX have been followed by larger corporations, giving the currency increased authority and publicity.

Dell was one of the first mainstream companies to join the revolution, starting to use Bitcoins in July of this year, while Microsoft also recently began accepting the new currency – allowing Xbox users to spend their hard-earned Bitcoins. What’s more, Richard Branson’s Virgin Galactic is also accepting the digital currency as payment for sub-orbital flights. For a more detailed list, head to Coindesk.

For those ready to join the Bitcoin revolution, the first step is to create a digital wallet. Website such as Coinbase make it easy to set up an account and can connect to your existing bank account. From there it’s easy to earn Bitcoin, or even convert some of your existing money into the new currency. What’s more, many third party Bitcoin wallets also come with a mobile app, so you can control your Bitcoin balance on the go – exactly like your primary bank account.

Like any currency, the value of Bitcoin is changeable, and its experimental nature means it’s also prone to rapid movements. Therefore it’s probably best to continue to use conventional accounts for savings and larger sums.

Is there a future for Bitcoin?

There are signs that Bitcoin will continue to grow in 2016. Secure enough for purchases across the Internet, the currency is arguably more secure than the Chip and PIN technology of today – or conventional online banking. Because of its changeable market condition, it’s unlikely Bitcoin will ever widely adopted for saving money, but it could be used for secure purchases.

Much like Apple Pay, the success of Bitcoin rests on retailers, both online and on the high street. It still seems unlikely that anywhere other than niche shops will accept Bitcoin at a till, but online could well be where Bitcoin continues to flourish. With Microsoft and its Xbox Live service now aboard the Bitcoin wagon, there’s every chance Bitcoin could become the currency of choice for in-app purchases or even more mainstream uses.

However, even if it is embraced by retailers, Bitcoin faces a similar situation to Google Glass. Praised by early adopters, Google’s AR headset existed in an exclusive bubble, and was only every used mainly by those interested in tech or looking for more anonymous buying power.

One interesting final point is that Bitcoin has rocketed in value since the shocking news of the UK’s pro-Brexit referendum result, rising to an incredible $768.24 per unit at one point as the Sterling plummeted to a 30-year low.