Have you ever woken up in the morning and checked your phone, only to be overwhelmed by just how much content is waiting to be consumed?

You may brew a coffee, check all your newsletter emails, update your status bemoaning the weather, catch up on the Instagram posts you missed overnight — and that’s all before you’ve gone on to BBC News to see what’s new in the world.

If this is you, the good news is that, as part of the BBC’s duty as a public service broadcaster to innovate and cater for the varied tastes of the nation, it’s come up with BBC+. This new app has just been released for iOS and Android, and it brings all your favourite BBC content to the palm of your hand.

Nice of the Beeb, right, but what’s it actually like to use? Let’s take a look.

How does BBC+ work? 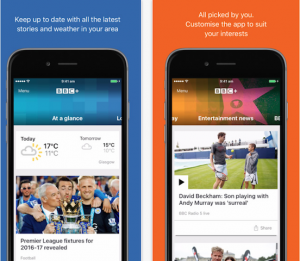 BBC+ isn’t just about news. It could be radio programmes you enjoy, a particular sport you follow, and of course all the shows you might have missed on iPlayer. The personalised app is designed to only surface the content you’re interested in, so theoretically you won’t be bogged down by stuff you don’t want – you’ll only see what you want.

You can choose from a long list of “My Interests” that include specific news items, radio and TV picks, music, food and all of the things you might put on your CV in the “hobbies and interests” section. They then appear in a carousel which you can swipe through.

The app also aims to bring the power of discovery to your fingertips, pointing you towards things you may not be aware of or are unfamiliar with. So all those spare moments when you’re waiting for that coffee to brew or you’re queuing for lunch, you can get updates on the topics you’re interested in, rather than wasting your time reading about Beyonce’s latest bust-up with Jay-Z — unless you like those kind of stories, in which case, you’ll never miss an update.

Doesn’t the BBC do this already?

The broadcaster already has a personalised service called myBBC, which lets you tailor your online user experience. The BBC News app also allows you to filter the stories that you want to read about.

BBC’s Head of Homepage, Product and BBC+, Paul Owen, noted on its website that this app is basically an extension of these already popular platforms. He said:

“BBC+ is a key part of the journey towards achieving a much more personal BBC, and truly brings topical information from across the whole organisation to your pocket, ready for you to access at your convenience.”

The stats suggest that between October and December in 2015, users who signed in consumed 44% more content than those who didn’t, so it’s a move that makes sense for the Beeb.

Is BBC+ worth downloading? 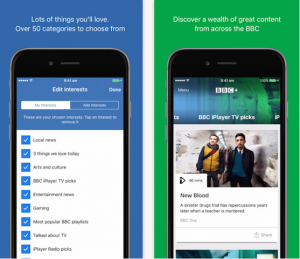 I downloaded it this morning and have been getting to grips with its interface, which isn’t too dissimilar to other BBC apps, just with a redesigned content carousel that’s reminiscent of SnapChat Discover.

I’m obsessed with the weather, so not having to check this in a separate app is rather appealing, as it appears at the top of my homepage in BBC+.

Called “At a glance”, this homepage-like section also lists the top stories of the day, followed by the latest news. As promised, this did change when I altered my interests in the Menu panel.

But the app’s main draw comes in the form of being able to swipe through all the interests you’ve identified when you first sign up.

I imagine it’s still trying to learn specifics about my behaviour, but for a first use I’m impressed by how well the content was suited to me. There are videos, TV shows, radio programmes, music playlists, recipes and, of course, all the news stories I want to read which save me from having to find them myself.

It will also send me notifications to remind me of what I’m missing out on, if I enable this feature.

The only problem is that, as I’m discovering more content, the time I would have saved has been taken up by my consumption of yet more content, and now I don’t have a chance to go and catch some more Pokémon. My digital headache continues.

My only other bugbear is that I can’t change the rank or order of how my interests appear in the app, so if I’ve only got a couple of minutes waiting for the bus, I have to go into the menu and click on the specific interest. But this is a very minor issue.

Related: See all the iPhone 7 models in new leaked shots

BBC+ is available on both iOS and Android and is out now.

Downloading is easy, although ensure you type in the word “plus” instead of the “+” symbol, as the App Store couldn’t find it.

If you haven’t already got a free BBC account, you’ll be prompted to sign up and create a list of your interests. Already have an account? You’ll be able to skip this step and carry on to the content the BBC already knows you enjoy.

You can change your interests at any time in the Menu panel and turn off notifications if they get annoying, but as of yet, this hasn’t been a problem for me.

Have you downloaded the BBC+ app yet? Let us know what you think in the comments below.