When Apple announced the iPad Air 2 last week, the focus was firmly on its super-skinny body, its potent A8X CPU, its Touch ID sensor, and its improved 8-megapixel camera. It was easy to overlook what could be the most important innovation of the lot.

We’re talking about Apple SIM, an unexpected stride towards a totally SIM-less future that launches on both the Air 2 and the iPad mini 3 this week.

So what exactly is Apple SIM?

It might sound obvious, but Apple SIM is Apple’s own SIM standard – and it’s been threatening to instigate it for years. Traditional SIM cards are physical chips that act as network keys for a single account attached to a single network operator, but Apple SIM isn’t tied to any network and is software-based.

But what are the benefits? 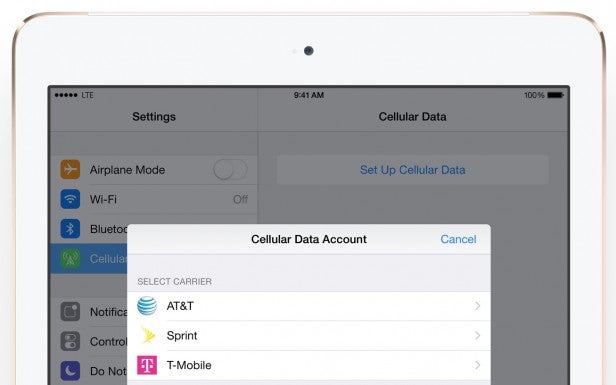 Apple SIM means that you’ll be able to switch seamlessly to any cooperating operator through a simple change in your settings menu.

There’ll be a physical benefit to this, of course. Changing to a new operator or a second mobile account won’t require messing around with fiddly SIMs, wiry SIM tools and easy-to-loose SIM trays. Assuming this technology eventually trickles down to non-Apple devices, there will also be no more removing the rear cover and battery.

Speaking of which, there won’t be any of the issues that often accompany swapping between an iOS device and another, such as an Android phone. Ever tried moving a nano-SIM into a micro-SIM slot? Finding an adaptor, assembling said hybrid, and inserting it into a slender modern phone can be frustrating to say the least.

Then there are the network issues that can accompany reliance on a basic, physical chip for access to your local creaky mobile network. All (potentially) gone with Apple SIM.

This freedom has the potential to go beyond the freedom from using physical bits of plastic. It also means you’ll be free to wander between operators, choosing the precise plan that suits you best. This could include shorter-term call plans that don’t keep you locked in place for two years.

That freedom to wander has a more literal application, too. Just think of those occasions where you travel abroad, and find yourself deliberating over whether to buy a local SIM or swallow your operator’s roaming charges.

The former is invariably cheaper, but can you ever be bothered to go into a local phone shop and negotiate the switch in an unfamiliar language? Probably not.

With Apple SIM, such changes will be possible from your iOS device’s settings menu.

No SIM cards means that Apple will be able to make even thinner phones and tablets. Think that’s an exaggeration given the tiny nature of nano-SIM cards?

In the past, that would be true. But consider this: Apple just released a tablet that’s 6.1mm thick. Just over half a centimetre. That’s tiny. Apple’s iPhone 6 and iPhone 6 Plus phones aren’t much thicker.

What we’re saying is that a millimetre here and there for the nano-SIM and its housing represents a much larger proportion of a device’s thickness than it did, say, three years ago. Getting rid of that will make quite a difference – and will create space for more important things like bigger batteries to boot.

It’s not the end of the SIM yet

Of course, replacing the physical SIM card in a tablet is very different from replacing it in a phone. With no voice calls or text allowances to worry about, it’s a far simpler data-only setup.

That’s also probably how Apple was able to get the operator support that it has. It’s likely to be a very different matter persuading those same networks – not to mention the majority that haven’t yet committed to Apple SIM – to give up their control and their lucrative 24-month contracts.

And as powerful as Apple is, it can’t yet distribute its iPhone range alone. It still needs that operator support to sell its devices to the masses, and we can’t see the operators caving in to Apple’s latest attempt to kill the SIM without a struggle.

Apple SIM will launch with the LTE versions of the iPad Air 2 and the iPad mini 3 this week.

At present, only a small handful of US and UK operators are onboard. In fact, in the UK there’s only the one: EE.

Read more: iPad Air 2 vs iPad Air: Should you upgrade?