Apple’s new iPad Pro has a fancy new True Tone display, but what exactly is it?

Apple didn’t want the iPad Pro 9.7 to seem like a tiny, unimaginative update of the iPad Air 2. So it upgraded almost everything about the tablet.

People still said it was a sign Apple has lost its mojo. But then they always do, right?

Two of the more interesting developments in Apple tablet land are subtle things, though. I’m talking about the True Tone display and Night Shift, a feature added to iOS in version 9.3. Let’s take a look at whether these are classic hollow marketing terms, or something worth getting excited about. 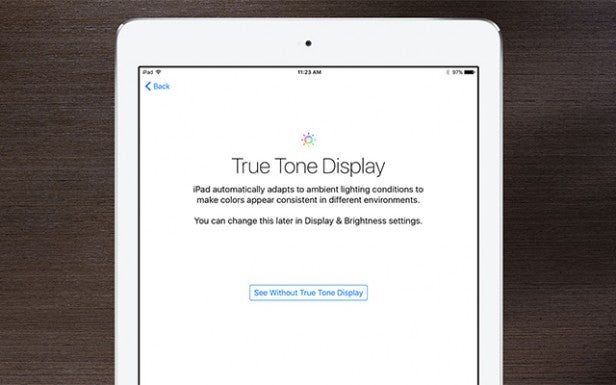 What is the True Tone display about?

True Color is a feature you only get in the iPad Pro 9.7, as of early 2016. It’s nothing to do with the extra-deep colours that tablet offers, but about shifting how the display looks in different kinds of lighting.

As what we see forms the basis of how we assess the world around us, it’s easy to think of vision as a constant. But our brains are actually constantly compensating for changing conditions, looking to normalise what we see.

True Tone makes the iPad Pro 9.7 alter the colour temperature of its screen so that, relative to ambient conditions, whites will still appear white rather than a “bit orange” or “a bit blue”. If your whites don’t look white, your colours won’t look right either: it’s like a Daz advert.

What this means is that when our eyes acclimatise to weird lighting, the iPad won’t be left behind looking weird even if what it is displaying is technically more accurate. To understand the power of this, we only have to skip back to the whole interminable “is the dress white/gold or blue/black” internet obsession from 2015.

The kind of dress you saw depends on how your brain pegged the scene’s white balance. 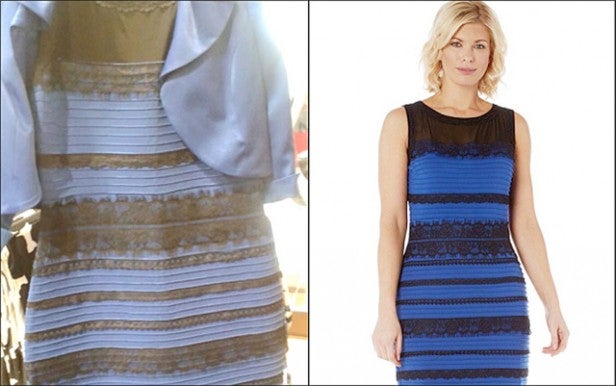 via Telegraph (and sorry for dredging this mouldy internet nugget up)

Everything we’ve seen suggests True Tone is designed to compensate for warm/cool lighting, not that purple mood light that seemed like such a good idea to buy when you were drunk that one time.

How does True Tone work?

There’s no magic to altering what the iPad’s screen displays. That can be done with software. The reason why this feature is currently exclusive to the iPad Pro 9.7 is the part that comes before, the sensor on the front of the iPad. 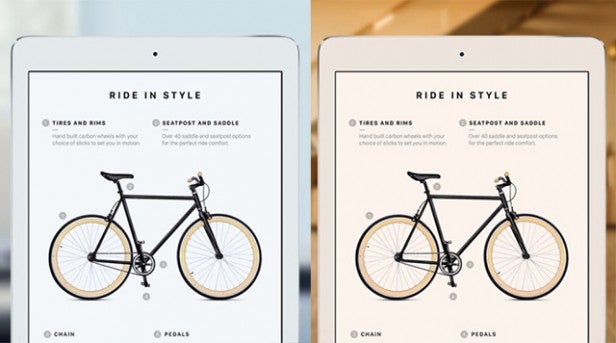 In most higher-end mobile gadgets, there’s a little sensor in the screen surround that measures the intensity of ambient light. When it’s brighter, the backlight goes up and so on. This is what makes an ‘Auto’ brightness setting possible.

The iPad Pro 9.7, though, has a two-channel sensor above the display that measures both the intensity of light and its tone. It knows whether your lounge is using an extra-warm 3000k light bulb or one designed to mimic daylight.

What is Night Shift?

Night Shift pulls the same kind of tricks, but for a different reason. It makes the screen get warmer as it gets closer to bed time. This reduces the amount of blue light emitted from the screen, in turn making the display appear more orangey.

It’s all a bit more involved than that, though. We had a chat with Scott Sorensen, President of Gunnars, to find out a bit more.

Gunnars makes special glasses designed to reduce eyestrain caused by computer displays. It has been working on this stuff a lot longer than Apple.

“Blue light, in particular at the 450nm point, is hard on the eyes for several reasons. This is the area that digital devices produce and this blue light is the only light the penetrates the eye all the way to the back of the eyeball and retina,” says Sorenson.

“Blue light between 380 and 470nm is considered bad blue light because it can cause accumulated damage to the retina, cause cataracts, and is linked to sleep disorders.”

Let’s not go down the road of accusing iPads of melting our eyes, but it does show why a warmer display should be much more comfortable, particularly for late-night reading when ambient light is likely to be lower.

The blue light effect a lot of us need to watch out for is how it can affect our sleep. It can throw off your circadian rhythm, which moderates your body clock.

Related: Your phone might be wrecking your sleep, but it can be stopped 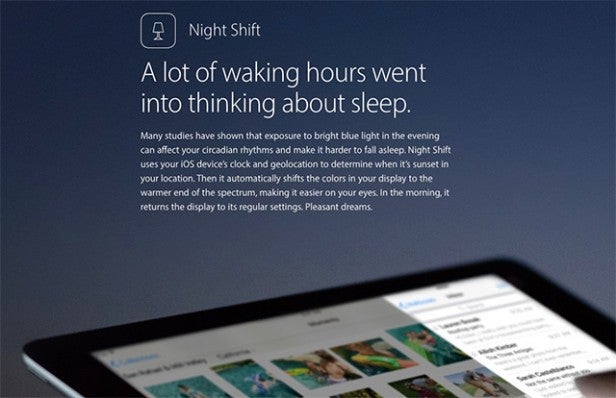 “While light of any kind can suppress the secretion of melatonin, blue light does so more powerfully. Harvard researchers and their colleagues conducted an experiment comparing the effects of 6.5 hours of exposure to blue light to exposure to green light of comparable brightness. The blue light suppressed melatonin for about twice as long as the green light and shifted circadian rhythms by twice as much (3 hours vs. 1.5 hours).”

Melatonin is the hormone that kicks in when it’s bed time.

Using an iPad Pro 9.7 right before you go to bed still isn’t the best idea, but Night Shift will reduce the negative effects on your body clock. There are blue light exposure health links to much worse things than losing a bit of sleep too, such as diabetes and even cancer that are not entirely spurious either. The hormones involved in your circadian rhythm affect your blood pressure and blood sugar level. There’s much more to it than just “feeling sleepy” or not.

We’re not into propagating health scares at TrustedReviews, but it is a handy reminder that playing Candy Crush saga in bed right before you go to sleep isn’t the best idea.

Have other companies done this stuff before?

Apple likes to pretend that everything it does is new, that no-one has really tried this stuff before. While True Tone is pretty new as an idea in a tablet, Night Shift is not.

A similar feature was introduced to CyanogenMod back in mid-2015 with version 12.1. It’s much more transparent than Apple’s version, letting you actually select the temperature for day and night time. This is a bit like picking a shade of lightbulb, the temperature measured in so many thousand kelvin. The lower the figure, the more orangey it looks. It gets bluer as you head up the scale.

If you’ve not heard of CynogenMod before, it’s is a custom interface for Android that started off as a dev community project, but now ships in quite a few fresh phones, including the UK’s own Wileyfox Storm. A few smaller companies use it as an alternative to stock Android. It’s pretty good.

How does it work and are there any downsides?

Features don’t get much simpler than Night Shift and True Tone. All you have to do is switch them on and off in the Display part of Settings. Your device handles the rest, with no choice of exactly how orange the display goes at night or how far True Tone skews the display. CyanogenMod offers more control. 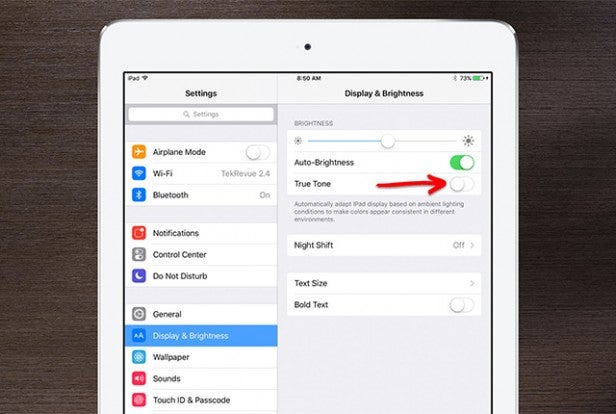 Here’s where we find the one obvious downside other than that you might not like your tablet or phone looking a bit orangey at night: True Tone actually makes your screen much less accurate.

Most phone and tablet screens are designed to meet a standard called sRGB, devised in the 90s as something for monitors and printers to aim for. The iPad Pro 9.7 opts for the much trickier DCI P3 cinema standard, but they both aim for accuracy based on these standards. True Tone throws that all away, though.

True Tone shifts the priorities, making them purely perceptual. It’s out to make whites look white to you, even if a colorimeter would tell you it’s like viewing the world through a pair of novelty John Lennon glasses.

Have you been using Night Shift or the new True Tone display on the iPad Pro 9.7? Let us know in the comments below.