OPINION: Evan Kypreos loves Game of Thrones. A lot. More than you, probably. But he loves it even more when it’s being shown on the big screen, aided by some fancy tech from Dolby. Here’s why.

Game of Thrones Season 5 spoilers ahead so turn back now if you haven’t watched it yet.

I’ve just been to see an episode of Game of Thrones on the big screen at a special Dolby event in London. Season 5 Episode 8 is called ‘Hardhome’ and is one of the more ambitious pieces of television you’re ever likely to see.

It starts slowly. There are some long conversations between Tyrion and Daenerys followed by a little Cersei comeuppance that warms the cockles. Speaking of cockles little Arya potters around selling them to unscrupulous insurance salesmen, but then the tension builds until it culminates in a frantic battle with the Night’s Watch and Wildlings banding together to face the fearsome White Walkers.

I’ve seen the episode before, of course. My wife walked down the aisle to the GoT theme tune played on a pipe organ a few years ago. You could say I’m a fan.

It was like I was watching it for the first time, though, when it was played to journalists and GoT devotees at the Empire in Leicester Square.

Related: Dolby Atmos – Should your next TV have it? 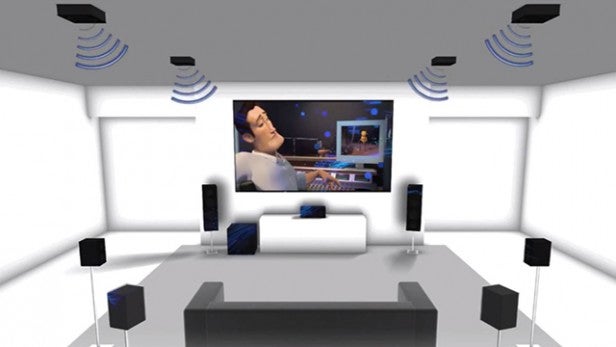 The huge cinema screen makes the tight close-ups during dialogue even more tense. The visual splendour of Meereen and its giant harpies gain a sense of scale I could never experience on my 42-inch LG TV at home.

I feel the fear of the Free Folk as the White Walkers descend on their ramshackle encampment. I sense the White Walker’s shock as his ice sword fails to shatter Jon Snow’s Valyrian steel Longclaw.

All this you’d expect when watching something on a big cinema screen instead of your telly at home, or even, if you’re a total philistine, phone on the go.

The biggest surprise for me was just how much of a difference having sound on an epic scale could make.

I’ve extolled the virtues of Dolby Atmos before, but that was for Godzilla, a big-budget movie made for the big screen.

Atmos works by positioning sound far more effectively and widely than traditional surround sound systems. In fact it can appear to whiz past you or hang just over your head. Hearing the screeches of the dead surround me as they attacked the living gives a level of immersion you just can’t get in your living room.

You can, of course, buy Dolby Atmos-enabled speakers for your home, with either speakers in the ceiling or using sound reflection, but it’s the big screen combined with the incredible audio in top cinemas that makes all the difference.

So isn’t it about time we could watch our favourite shows at our local cinemas? I’m not talking about The Big Bang Theory or Eastenders. It’s the golden age of TV and top shows now have casts and budgets that match film. I think plenty would flock to munch popcorn and watch their best-loved characters 10-feet tall.

There have been a few attempts to do just that, but you have to be lucky enough to live close to a cinema that’s willing to take the chance and even then it’s usually just a one off.

So get a move on Odeon, Vue and Cineworld. Pull your finger out Picturehouse, Empire and Showcase. We want to be able to watch whole seasons on the big screen.

Why not show two episodes at a time every fortnight at a decent price? Then we can watch GoT, The Walking Dead, Better Call Saul, Homeland and all the best shows out right now in a way that does justice to their brilliance and with like-minded company.

These great programmes won’t need to keep it safe for TV so we can have longer edits, with more adult material. Cuts have even happened to the bloodthirsty Game of Thrones. I want all the gory glory.

I’d pay a little extra and wait a little longer for that, wouldn’t you?

Game of Thrones Season 5 with Dolby Atmos is available to buy now from Amazon on Blu-ray and DVD.