Think VR is just about gaming? Dan Griliopoulos explores how the arrival of headsets like the Oculus and the Vive could be an exciting prospect for students and teachers as well.

Education, despite being crucial to any society’s future, has never been seen as forward­ looking. The images of chalk­dusted tutors leaning forward onto their elbow patches as they conjugate Latin might be mostly out­dated, but it’s probably fair to say that teaching has not been the most dynamic profession, nor the quickest to seize on the promise of technology. Nor has the system been equal, heavily biasing towards the wealthy. And some digital education professionals and corporations (such as PWC) are seeking to de­emphasise traditional university qualifications, because they so rarely indicate anything about later job performance. Education is ripe for a shake ­up.

Virtual Reality, by contrast, has always been seen as the least grounded of industries, most often pursued by either naive idealogues or ignorant salesmen. Yet, it’s changed hugely and quickly, drawing upon the deep resources of video games development and the technical advances driven by mobile phone technology to create a range of portable hi­gh resolution devices with advanced head tracking. The large number of major tech companies entering the space ­ Facebook, Sony, Google, Samsung, HTC and Valve ­ reflects the feeling that this sector has huge potential, but that only one company can ‘win’. Only Apple has been silent.

That gold rush reflects how convincing the currently available tech demos are. Almost everyone who tries a modern virtual reality simulation is immediately convinced that this is a huge leap forward. That compulsion makes it sound like the devices are brainwashing us ­ they’re not, we hope ­ but it does mean that they’re going to be exceptionally­ useful for education. 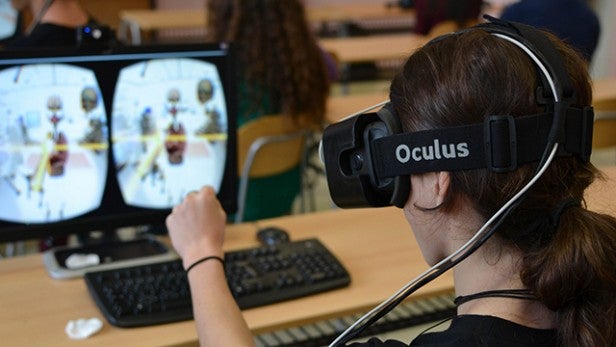 The current state of play

A quick look at the two markets is revealing. Facebook bought the VR market leader Oculus for $2.5 billion, which is a pretty penny for a company with no consumer products or cash flow. By contrast, global education spending is estimated at $4 trillion yearly, of which a fraction is so-called ‘ed­tech’ ­ Ian Fordham, the CEO of EdTech UK, estimates that the ed­tech market as a whole is $100bn globally. For VR to be responsible for just 2.5% of that ed­tech market would pay back Facebook’s gamble in a single year.

“Education as most UK students receive it today has its basis in 200 year old principles.” says Julia Begbie, Deputy Director of Studies at the KLC School of Design, London. “Ken Robinson describes students as being educated in ‘batches’, by age; education is homogenised and standardised so that one teacher can ‘deliver’ it to 30 students; in contrast future education will recognise that these 30 students are individuals and will differentiate course delivery and materials, tailoring these to each student’s specific needs. Historically we couldn’t provide every student with their own teacher; advances in technology will personalise education so that it does suit every student.”

Much of this tech will be in MOOCs ­ massively open online courses ­ which are like giant online-only, impersonal schools. Some will be in more ­desirable improvements to classroom­-style education, with students learning on digital platforms (such as smartphones or even feature phones) and analytics programs that make sure no pupil is left behind. And the ultimate aim is to have individually ­crafted experiences for every pupil. But VR brings something that none of these courses and this tech seems to focus on ­ immersion which enthuses. 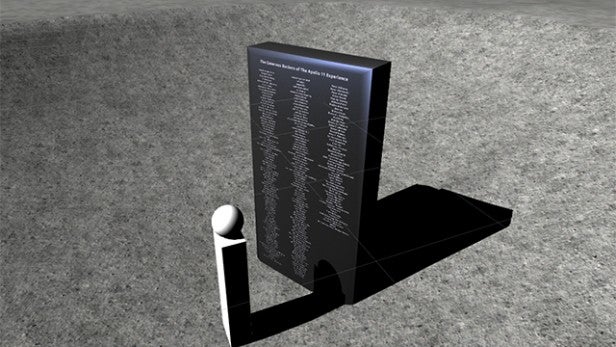 Why VR and education could be great together

David Whelan is the CEO of Immersive VR Education ­ and that name should give away what he does. “Virtual reality has the potential to revolutionize education in the same way as reading and writing did thousands of years ago. For centuries human kind has passed down knowledge through textbooks. Now we can pass knowledge to future generations through virtual simulations.” Whelan doesn’t just talk about VR education though ­ he does it. “I have three kids myself ranging from seven to thirteen. I use virtual reality to give them tours of the Solar System in an experience called “Titans of Space”. They have also walked with dinosaurs, dived with whales and walked the streets of Rome 2000 years ago, all in virtual reality. They love going to school and when they come home with projects I always try to find a virtual reality experience that might be able to help them with their studies.” Kids that *love* going to school?

Whelan must be doing something right. Whelan’s most notable project is his Apollo 11 experience, which allows users to experience the entire moon landing from the perspective of Neil Armstrong. “This is so much more powerful than reading a short paragraph about the moon landing in a text book… Other experiences such as NEOS show the scale of our Universe from the smallest particles to the largest bodies in our solar system. Experiencing events in history or visiting impossible places will re­engage students into education. This will be especially true for pupils who have a hard time visualizing topics.” 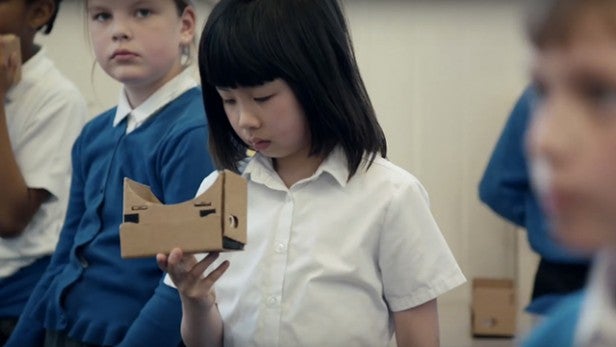 VR education is particularly useful for risky professions, like medicine, advanced construction or war, where trainees can’t be allowed to make mistakes in the field. “Virtual Reality Education allows you to simulate any situation in a safe environment.” says Whelan. “Virtual reality can be used to develop surgery simulations or three dimensional images of the human body which the students can explore. This would be impossible in real life and trainee surgeons would only rarely get to see a real life surgery being performed for certain conditions. Using VR they can be simulated virtually with no consequences to the patient and be repeated over and over again.” Begbie hopes that these simulations can be extended to laboratories and realistic working environments.

Whelan is going one step further and combining the digital learning tools we spoke of earlier ­ MOOCs and user analytics ­ directly with VR. “We are building a Virtual Reality University platform called “Lecture VR” where students and educators can communicate in our virtual reality spaces using avatars and experience events and take courses. We are building a tool set for educators which will allow them to import their own educational content and create immersive virtual reality lessons. Think of this as a MineCraft for education where any educator can teach any student anything through the medium of virtual reality.” Lecture VR will be released on the Oculus Rift DK2 prototypes this winter, and be ready for launch on the Oculus Rift, Vive and Morpheus as they launch next year.

At the heart of Whelan’s project (and many ed­tech projects, like Khan Academy) is an egalitarian desire, to reduce the impact of wealth on education. “Financial status should not determine your education prospects.” says Whelan. In the UK currently, wealthy but average children are 35% more likely to become high earners than clever but disadvantaged children, as their parents use their wealth and social contacts to access better areas of the labour market.

That’s a system that’s terrible for the economy, trapping those with the best potential in inappropriate careers. “We hope to allow access to the best educators worldwide through our online educational platform.” says Whelan. “We plan on taking what’s great about MOOCs and combining them with the benefits of traditional learning and wrapping them up in a fully immersive world that’s freely available to students worldwide.” That’s a noble aim, and it’s our best hope for a more skilled, richer world in the long run.

Do you think virtual reality and education are a good match? Let us know your thoughts in the comments section below.