Reluctantly dragging ourselves away from the big-screen thrills of the VW1000ES, we were next presented with a pair of much smaller screens just 17in and 25in across. Yet in their own way, these ‘small fry’ were every bit as exciting as the 120in pictures from the VW1000ES.

The thing is, the two screens were top-end models from Sony’s Trimaster EL broadcast monitor range. And they’re special because they use OLED technology.

During our CES coverage we bemoaned Sony’s lack of OLED presence there at a time when OLED suddenly became big news. So it’s clear that the brand wants to remind us in no uncertain terms that it’s very much still a major OLED player. And despite the small sizes of Sony’s latest commercial OLED screens, we left the demo in no doubt whatsoever of  OLED’s enormous advantages as a display technology. 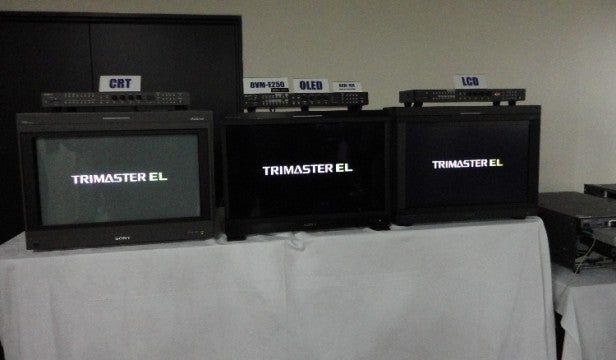 Before the screens were ‘unleashed’, we were given a short but punchy presentation outlining the key reasons why Sony’s OLED solution works so well in the demanding ‘pro monitor’ space.

Sony’s OLED screens also outgun CRT and LCD monitors by being able to reproduce a full-range colour space at all luminance levels, while their ultra-fast pixel response versus LCD means they can deliver much crisper motion handling.

Sony had set up a direct side by side test to back up its OLED claims, featuring a CRT monitor, one of its LCD monitors, and a new Trimaster EL OLED model. And it’s fair to say that the results of their demo were beyond emphatic. When it came to black level response, the OLED was so far ahead of the CRT and especially the LCD models that it was almost embarrassing, with the OLED screen able to resolve a black as deep, natural and rich as the light-free room the demo took place in.

What’s more, since OLED tech is self-emissive, the darkness does not come at the expense of any brightness elsewhere in a ‘mixed’ image, meaning that shadow detail reproduction is more or less perfect.

The OLED screen also delivered much more dynamic, natural and subtly rendered colours than its two rival screens during the demo, while the vibrancy of its colours worked beautifully with its effortless black level response to produce an entrancing dynamic range.

The OLED screen further spanked the CRT and especially LCD monitors when it came to vertical motion clarity, and humbled LCD where horizontal motion was concerned. To be fair, CRT proved the absolute best screen for sharpness when watching horizontal movement. But even the most in experienced eye would have been able to see in a microsecond that overall the OLED screen was simply miles ahead of the other two.

Inevitably this all served to get us pathetically excited by the thought of what might happen if Sony  filtered its pro-level OLED technology down into larger screens aimed at home users. Though our excitement was tempered somewhat by the discovery that, staggeringly, the top-end 25in screen we were shown could cost you – or rather a mastering studio – around £25k… Ouch.

This inevitably shows that there are still huge question marks hanging over whether Sony can ever really make large-screen OLED TVs remotely affordable. But the demo and presentation as a whole certainly had the desired effect of reassuring us that Sony is still very active indeed in the OLED world. 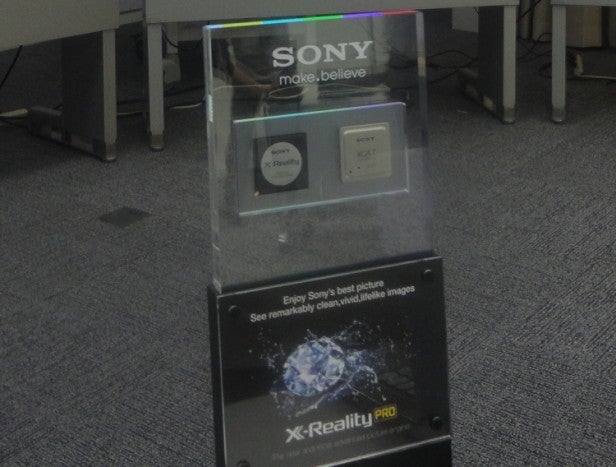 Day two of our Sony Tokyo trip kicked off in pretty ‘heavy’ fashion with an in-depth seminar on Sony’s X-Reality/X-Reality Pro engine and 3D technology. This engine has actually been around since last year, but Sony was keen to go into more detail about it given that it hasn’t really explained it to European journalists before. Plus, as we’ll discover, it’s got a rather cool new trick up its sleeve for this year…