Some say that in the tablet world, there are two kinds of contender: Apple’s iPad 2 and everyone else. However, among Android tablets the Asus Eee Pad Transformer stood head and shoulders above the rest, thanks to an optional keyboard dock that also doubled the battery life while providing full-size USB ports and a regular SD card slot – essentially turning it into a productivity tool that had a better screen and lasted longer on the go than any netbook. Mind you, the tablet itself wasn’t bad either, and Asus has taken all the stops out for its sequel, the Transformer Prime (codenamed TF201).

This sequel to the original Transformer (TF101) is lighter, slimmer, more stylish, metal-clad, comes with an even better screen and, most significantly, a quad-core CPU and 12-core GPU combo courtesy of Nvidia’s Tegra 3, making it the most versatile and powerful Android tablet on the market. Even without its dock it’s a stunner, but how does it fare against Apple’s king of the hill contender?

Superior specs are highlighted in orange above

Build and Design
For starters the Prime is thinner and lighter, as you can see in our comparison table. Its metal chassis feels almost as sturdy as the iPad 2’s and it looks just as good. Which you’ll favour will depend on whether you prefer the sand-blasted silver aluminium of the iPad 2 or the smooth, concentric ring design of the Prime. Apple lets you pick either a white or black plastic bezel around the screen, while Asus gives you a choice between an Amethyst Gray or Champagne Gold back. There’s almost nothing to choose between them on build: they both offer metal chassis and glass fronts.

Winner:
The Transformer Prime, for being both thinner and lighter despite stuffing in more of everything. 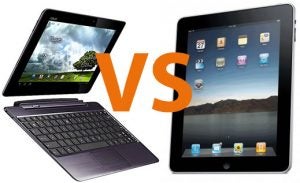 Connectivity
Even without its dock, the Prime offers better connectivity than an iPad 2. Its microSD card slot lets you expand the internal memory of 32GB or 64GB by up to an additional 64GB (Sandisk’s 64GB microSDXC card will supposedly work, though not without possible issues). There’s also a microHDMI video port for display mirroring and playing back content on your TV or monitor, which you may want to do often as the new Transformer Prime is a multimedia powerhouse unmatched by other tablets. Oh, and there’s hardware support for any Bluetooth or USB games controller you might care to use, from a PS3 dualshock to a WiiMote.

Winner:
The Transformer Prime, for not needing an expensive adapter to connect to anything else. Oh, and for its cool console controller compatibility. 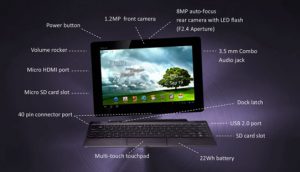 Screen
With its fantastic screen, the Transformer Prime ups the stakes once more. Though both tablets share IPS-panel displays for superb viewing angles and reasonably accurate colours, Asus’s tab gives you a higher 1,280 x 800 resolution (compared to 1,024 x 768 on Apple’s effort), a bit more real estate (10.1in compared to 9.7in) and better contrast. It also literally outshines all competitors, with a 600nits rating making it the brightest screen we have ever seen on a tablet. As a result, the display is visible even in bright sunlight despite the reflections caused by its tough Gorilla glass protection.

Winner:
The Transformer Prime, for searing your retinas after ensuring the last thing you’ll see are its vibrant, accurate colours, deep blacks and pure whites. 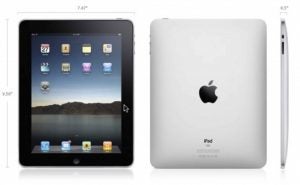 Specifications
The Prime’s specs best the iPad 2 yet again. It’s the first quad-core tablet in the world, and is more powerful than nearly any rival – barring premium Windows tabs like the £1,000 Samsung Series 7 Slate. In addition to its four primary cores there’s a low-power companion core to take care of low-level tasks, and a whopping 12 graphical cores ensure games are almost console quality.

It also backs this with double the iPad 2’s RAM. Frankly, there’s more untapped potential here than most developers will know what to do with, especially on the graphics side of things – oh, and HD video of all varieties will finally play back smoothly, a feat hitherto unmatched in tablet land, regardless of brand, CPU or OS. By the by, did we mention the Tegra 3 chipset can potentially handle 2D-3D conversion on the fly?

Winner:
The Transformer Prime, for packing more cores than an apple pie bakery’s refuse sack, and finally realising our dream of carrying a HTPC in our backpack. 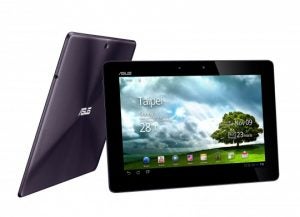 Cameras
On the iPad 2, cameras are more of a checkbox afterthought than a usable addition. On the Prime they’re very good – better, in fact, than the vast majority of rival tablets.  Asus’ rear-mounted effort is particularly impressive, being an 8MP, F2.4, dynamic auto-focus model with its own LED flash. It takes pictures that put other tablets to shame, and manages 1080p video to boot.

Winner:
The Transformer Prime, for not making you look like a grainy, plague-ridden zombie when video chatting, and for producing pictures you can actually show off without embarrassment.