With so many sources available to get your news fix, Sky has decided it needs to change the way it reports the news on its famous Sky Sports News Channel. Luke Johnson went behind the scenes to find out why the future of transfer deadline day might look like.

Sky Sports News HQ, Sky’s refreshed and rebranded sports news channel, went live this morning. But this update is about far more than a lick of paint and a new ‘HQ’ suffix. The Sky Sports newsroom has been given a modern day makeover, both in front of and, more interestingly, behind the camera.

From touchscreens and tablets to robotic cameras and social side-lines, all are now key ingredients to the Sky Sports news production and I spent a morning seeing exactly that this new world looks like, and how technology is changing how Sky reports the news. 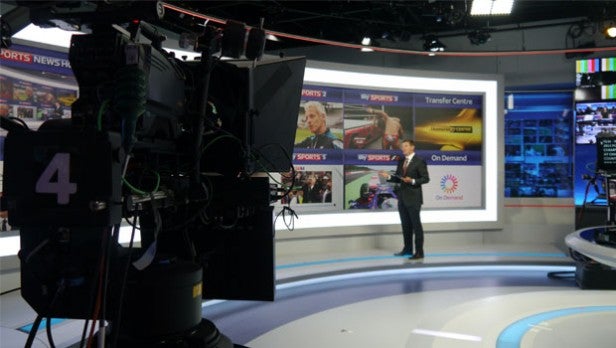 Everybody stand up
Screens were the first things I noticed when entering the Sky Sport News HQ studio. Banks of dozens upon dozens of displays dominate the expansive space, all showing live feeds and highlight reels.

They all pail in insignificance, however, to the studio’s new showpiece feature – an 18 foot video wall. The purpose of this monstrous display is to give more versatility to the presenters, bringing variety to broadcasts.

She added: “A huge amount of work has gone into this. A lot of thinking and a lot of research into what people want. We’ve had to change how we do things in order to deliver that.”

The result of these changes is a less static and sterile environment. Yes, the large, domineering desk remains for the bulk of the broadcasting, but the set has been redesigned to get presenters on their feet and moving around.

Touchscreen displays now litter the newsroom offering various new shooting points, while tablets allow presenters to step away from the desk with freedom.

“What we never had before, is that in this setup we’ve got a couple of radio cameras which are wireless,” Wilmington said. “They can go anywhere around the newsroom. We can also shoot right up the news room so you’ve got this relationship.”

This more fluid and versatile studio space means further changes to the way things are shot are needed. Fortunately, Sky has this covered in a fun and efficient way.

The rise of the machines
Robotic cameras are the answer. Like a high-tech Dalek ready to record rather than exterminate, robotic cameras casually shuffle their way around the studio floor at the control of a desk-based operator.

“The operator takes control of one camera at a time and then manoeuvres them around within the space,” Wilmington told us.

There are practical sides to this luxurious toy, too. As well as reducing labour costs, the robotic cameras offer a more fluid and flexible shooting setup, assuming they are carefully manoeuvred that is.

“Because we are shooting 360-degrees around, spatially where the cameras physically are, it’s got to be very carefully choreographed.

“The operator has to think really carefully about where they are, make sure any obstacles are out of the way, move any floor monitors, not bump into people, not pin people against walls. There are quite a lot of different things to think about.”

Fortunately, Sky has a high-tech solution to this potential problem – a series of compact, ‘spy cams’ strategically placed with a top-down view act as visual parking aids of sorts for the rigs.

Slightly unnerving in their unmanned movements, these cameras will take some getting used to. “It is really disconcerting the first few times you’re in a news room and there is no person by the camera,” Wilmington said. “It’s really quite spooky.” 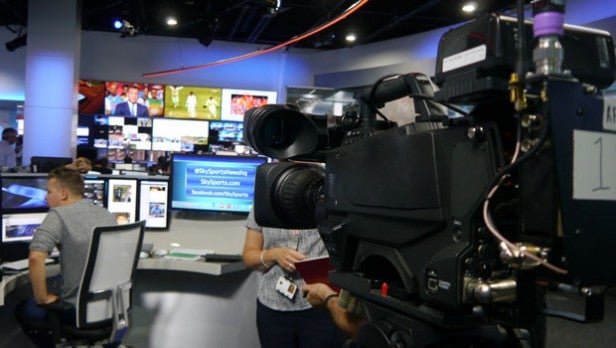 Social – Twitter as the future of news
All these technical and aesthetical changes are meaningless without a revamp of the core news practises. Sky, however, is addressing this too, adopting more modern breaking news sources, such as Twitter.

“Joining everything a bit more together [is the goal],” the studio head told us. “Obviously everyone is now consuming their news in lots of different ways.

“We are bringing social and digital media into the newsroom. We’ve allocated space for them so they are now sitting with reporters and with the planning teams. We are now all working much more closely together.”

With presenters to give dedicated Twitter updates – this will be utilised mainly around deadline day as news breaks and evolves by the second – a dedicated team has been installed simply to monitor social developments. 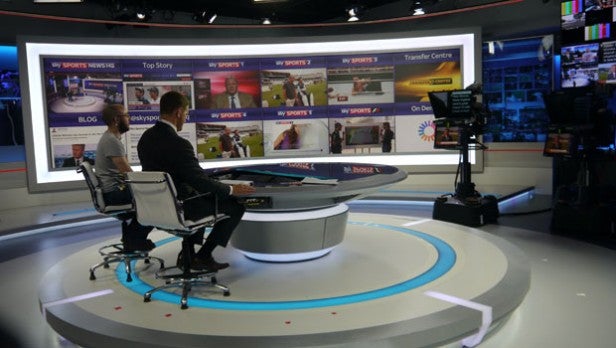 “We have a dedicated position looking at all of what’s going on via social media. The subs there will bring it all together and we will be able to say to people ‘this is what people are talking about and we are investigating it. We are trying to find out the truth behind all of this gossip’.

“Obviously coming up to deadline day, you will be well away how much of that chatter there is. We can go through all of that.”

The overall result of this revamp should be a more comprehensive cover that’s more engaging and entertaining for the viewer.

“We don’t know what other people are planning, but certainly nobody else is doing this.”