We explore the story of Tomb Raider Ascension

As a character, Lara Croft is no stranger to total makeovers. Since the first game was released in 1996 there have been no fewer than ten major Tomb Raider games, along with a smattering of handheld versions, ports and spin-off titles such as Lara Croft and the Guardian of Light.

There have been comics, novels, movies and even amusement park rides – and Lara’s 19-year long career has seen her re-imagined, remade, recast and rebooted as everything from survivor to sex symbol; thrill-seeking heiress to honest archaeologist.

Most recently developer Crystal Dynamics rebuilt Lara as a shipwreck survivor in 2013’s Tomb Raider, written by Rhianna Pratchett. The idea of a gritty and realistic take on the franchise proved both financially and critically successful enough to motivate a sequel, Rise of the Tomb Raider – but the story could have been very different indeed. 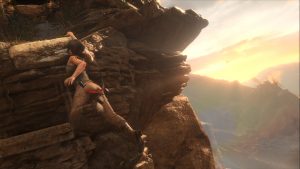 Crystal Dynamics had been working on the 2013 reboot of Tomb Raider for years before release and was still exploring new concepts as late as 2010. One of these, known internally as Tomb Raider: Ascension, would have moved the franchise in a direction that evoked equal parts Shadow of the Colossus and Resident Evil.

Primarily a survival horror game, Tomb Raider: Ascension would have taken place on an entirely different island, with an entirely different cast. In 2013’s Tomb Raider reboot, Lara starts off young and timid, relying on the encouragement and support of her crewmates – but in Ascension, Lara would have been much more seasoned to start out with. She’d also have been accompanied by a six year old girl called Izumi, though it’s unclear how the two would have met or arrived on the otherwise deserted island.

Heavily inspired by the work of Sony’s Team Ico, Izumi was intended to accompany Lara throughout the entire game and the two would have worked together to uncover the island’s secrets. Videos of Acension’s early prototypes show several features – including a grappling hook for Lara, indicating she may have arrived in a more ready state. 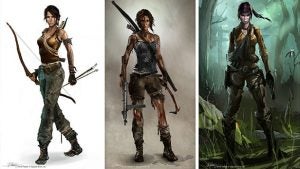 It’s unclear how the story would have developed in this early version of Ascension, but we do know Izumi would have revealed water-controlling powers and with them Lara would battle explicitly supernatural enemies. Reports of the Ascension’s earliest designs even suggest Lara may have battled exclusively supernatural foes, rather than the mix of scavengers and spirits we ended up with. The Final Hours of Tomb Raider book which reveals the making of 2013’s Tomb Raider even indicates the island would have been “inhabited by ghosts and monsters”.

Early concept art from this version of Ascension shows Lara and Izumi travelling across the island by motorbike, doing battle with tree-covered enemies which seem to have risen from the landscape. Before work could begin in earnest though, publisher Eidos deemed these concepts too risky a departure for the franchise, leading Crystal Dynamics to cut Izumi’s character.

Concept art and interviews indicate the team responded by replacing Izumi with a pet monkey to accompany Lara, but that idea was short-lived too – and Ascension’s soon focus shifted much more deeply into the horror genre. 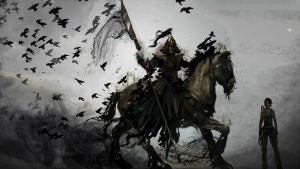 From the start, Tomb Raider: Ascension always drew inspiration from two main sources: Ico and Shadow of the Colossus. With Izumi cut from the game it was impossible for Tomb Raider to continue in Ico’s vein and create a game about companionship, so Crystal Dynamics doubled down on the latter touchstone.

Continuing to experiment with Tomb Raider’s horror elements, the next version of Tomb Raider: Ascension pit a solo Lara against an island filled with monstrous behemoths. Much like the seminal Shadow of the Colossus, Lara would have travelled the island on horseback, dodging the hulking beasts as they pelted her with whole trees.

The colossus were not the island’s only inhabitants however. Once again concept art and early prototype videos show Lara fending off sinister monsters that look like part of the island itself. Flamethrowers and other cut weapons would have been key too Lara’s survival, along with the ability to skate behind her horse by dropping to the floor while still holding the reins.

Ultimately this version of Tomb Raider wasn’t to be either. Unsure of how action  fans would respond to Tomb Raider’s sudden change of tone, Eidos commissioned marketing surveys that were leaked online in 2009. As well as indicating a mature rating and asking what players thought of a survival horror Tomb Raider, the surveys shared concept art of the colossi and various other enemies. 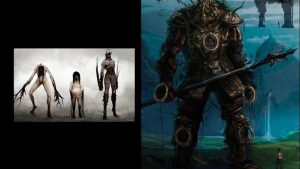 The response was poor however. Fans said they missed the globe-trotting feel of previous Tomb Raider games and deemed the horror approach to be too abrupt a change from Lara’s previous adventures. Wary of the poor response to the previous Tomb Raider: Underworld, Crystal Dynamics and Eidos cancelled Ascension again in order to explore a more grounded and realistic take.

Internally, quality had been a huge concern too. In The Final Hours of Tomb Raider, the team recount a meeting in which the core question was ‘Will this be as good as Batman: Arkham Asylum?’ When nobody on the team said yes, the decision to cancel inevitably followed and the decision was made to start looking at other options. The team ended up focusing on a more nuanced and slow story which surrounded Lara with many more companions than before. 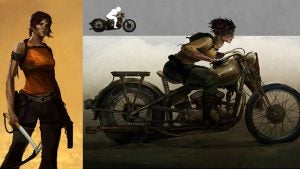 In 2013, Tomb Raider realised it’s final form – but Lara’s story is still far from over. Rise of the Tomb Raider is due for release on Xbox One and PlayStation 4 later this year and the team – including lead writer Rhianna Pratchett – have been planning for Lara’s next iteration for a long time.

“Writing for games tends to be hugely iterative,” Pratchett told Polygon last year.  “Characters spend quite a bit of time being a bit blobby and flexible until things start solidifying. Even then elements can still get pulled apart by the wild horses of games development.”

“This time it’s a bit subtler; it’s a lot more about Lara’s internal wranglings with who she is and how the world sees her.”