THX and ISF Calibration – The Equipment

The man we challenged to show us this potential was Mark Cheffins, Tech Support for Onkyo Europe, but also a fully qualified and hugely experienced THX-certified professional.

Before letting Mark get down to the business of calibrating both the Onkyo receiver and the Panasonic TV, we had a chat to get a bit of background on exactly what he was going to be doing.

First, the equipment Mark used for his calibration of both the Panasonic TV and the AV receiver – as per minimum THX requirements – included an Xrite1 Pro2 spectroradiometer, an Accupel test pattern generator and, finally, Chromapure’s powerful THX calibrator measuring software.

The calibration process, meanwhile – which can take anything from two hours to an entire day, depending on source numbers – is described by Mark as treating video like a painting, in that he’s trying to make pictures look as close as possible to what the director intended when he first shot a scene. 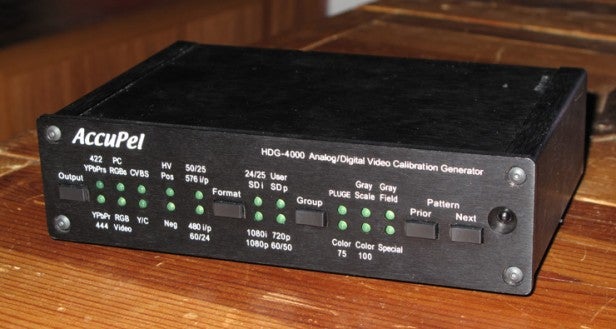 This box of tricks produces perfect test patterns for calibration

This process involves first looking at the ‘canvas’ of the picture: the blacks, whites and greys, adjusting them towards the Rec709 HDTV industry standard (the starting point for all production masters, which comprises chiefly pixel count, frame rate, luma and colour components) with its D65 reference white point.

Once this foundation to the picture is sorted, then it’s onto the three primary and three secondary colours, using the colour meter to adjust colours one at a time until they get as close as possible to their grid references on the Rec709 colour triangle – dubbed the “ordnance survey map” of TV calibration by Mark.

Achieving absolute perfection here is never going to happen, apparently. But so long as a display can get to within a certain tolerance of the perfect figures, it will be close enough to the correct values for any shortcomings to be imperceptible to the human eye.

Not surprisingly given the sophistication and accuracy of the adjustments being made, the more flexibility a screen – and the Onkyo ISF receivers – offers with its adjustments, the closer that screen’s final colour triangle will look to the ‘shark fin’ shape of the Rec709 standard. 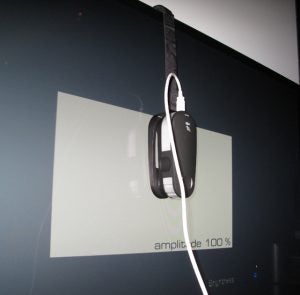 An X-rite1 Pro2 spectroradiometer. Even the basic version costs upwards of £1,000.

You might be wondering at this point why it’s worth paying for a professional calibration of a TV like the Panasonic P50VT50 that’s already THX certified and has THX presets, especially as both THX and the ISF work towards the same end goal. However, this goes back to the point made earlier about a proper calibration taking into account your specific room conditions and the exact nuances of the panel you’ve bought. No TV preset, not even a THX one, can deliver that extra nth degree of perfection you can get with an in-situ calibration.

If you’re also wondering where the THX capabilities of the Onkyo TX-NR5010 come in, we should clarify that at the moment THX certification on receivers currently applies solely to their audio abilities. Audio isn’t the focus of this feature, but suffice it to say that the NR5010’s THX endorsement basically means it has all the tools it needs to sound absolutely amazing. Something our ears are only too happy to confirm.

As Mark settled down to get the calibration process underway, the rest of us hit the pub. Well, come on; Mark not only had to calibrate the Panasonic TV, but he also had to calibrate the HDMI output of the Onkyo receiver differently for each of the Sky box and Panasonic Blu-ray sources going into two of the receiver’s nine HDMI inputs.

A couple of pints of lemonade and a pie later we rolled up back in our test room to find Mark still beavering away but nearly done, looking very satisfied with his three or four hours of work, and raving about the calibration tools of the Panasonic P50VT50 TV, a set he hadn’t worked with before. But what of the results?