Where was the video streaming? Can’t we even alphabetise our playlists yet? And when are the mobile apps getting a much needed overhaul? There was a lot of grumbling to come out of the hyped ‘What’s new with Spotify’ press event this week, but the repercussions may prove anything but a damp squib. The game has changed: Spotify is not only trying to alter the way we enjoy music, but it has finally declared war on the industry big boys.

You can read our full report on press event, though here are the Cliff Notes: Spotify has opened up its software to free third party apps. Unlike 2009’s Libspotify which allows Spotify functionality to be built into other devices (like receivers, TVs and even Tivo), this allows third party apps to run within Spotify itself. Want to see real time song lyrics to your Spotify tracks? There’s an app for that. Want to see local concert information for all bands in your playlists? There’s an app for that.

This phraseology is deliberate because like iOS or Android, Spotify now has its own app store and that means it is no longer a service, but a platform. 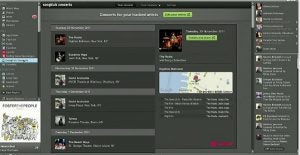 “Once you take a look, you’ll see why we believe this is truly the beginning of something game-changing for digital music,” proclaimed Spotify founder and CEO Daniel Ek. “We think this will lead to integrations that keep Spotify beautiful and simple, but layer in great musical experiences designed to be social and fun.”

It is easy to see where Ek is coming from. On the one hand the idea is very simple: losing focus and becoming bloated is a well walked path for software companies and this both allows Spotify to concentrate on what it does well and – from a cynical perspective – get others to fix its feature and functionality shortcomings. On the other hand the idea is hugely ambitious since for a platform to succeed you need global developer support. Does Spotify think it is Apple, Amazon or Google? No and it doesn’t have to be because Spotify has perfectly timed its partnership with Facebook. 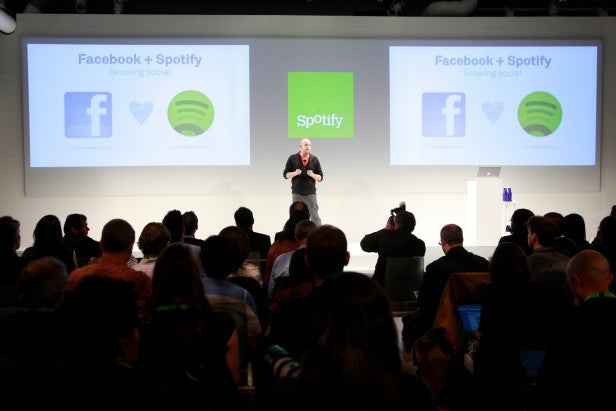 Throughout Ek’s presentation speech ran the theme of growth. “We’ve arrived at a crucial moment when we have both scale and momentum,” he declared while reeling off an array of statistics:

The momentum mantra is crucial because Ek knows right now Spotify exists in a crucial timeframe, a limited window where Apple, Amazon and Google dither…