A quick tour around the Olympic Park could convince you that the 2012 Olympics are almost ready to go. The key buildings are all fully constructed and the athlete’s village is ready and raring to be turned into council housing. As long as you look past the scores of workmen raking gravel between cigarette breaks, the blank flower beds waiting for the seasons to change and the ugly barriers that litter the site, you could almost begin to believe the whole shebang will go without a hitch. There’s a whole world behind the bricks and mortar, the muscle and sweat, that are the public face of the Olympics, though. Because it runs on technology as much as athletic excellence. 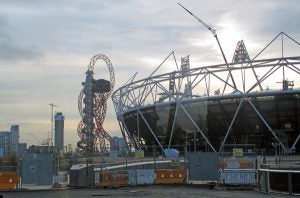 This side of the 2012 Olympics is what will let officials keep up with results, allow TV coverage to keep up with the deluge of numbers, supply the athletes with computers to use during their stay at the Olympic Village, and even manage ticket scanning at the gate. It’s all run by LOCOG, and just under 12,000 Acer computers, most of which are still waiting to be deployed. To give that some context, that’s more than the number of athletes taking part across the whole pantheon of events.

LOCOG is the London Organising Committee of the Olympic Games – the title may smack bureaucracy and the generic, but the task ahead of it is anything but. Without its backend clout, there would be no Olympics – at least not as we know them. It’s not 776 B.C. anymore, folks, and unfortunately that means almost nothing can work without serious computing power behind it. Each event in the Olympics and Paralymics has its own bank of computers to do the number crunching, from the 100m sprint to BMX.

These virtual teams are what will collate all the data from each event, as it’s happening, and see it piped across the world in a fraction of a second.  Impressive stuff, and you’d never guess from a look at the archaic user interface used at the touchscreen terminals that will be spread across the Olympic Park – the main way for real people to tap into the infrastructure first-hand. The Apple effect has not spread as far as the 2012 Olympics, that’s for sure. LOCOG will supply these touchscreen terminals, and there will even be a few available to common folk like you and I – if you were lucky enough to snag some tickets, that is. 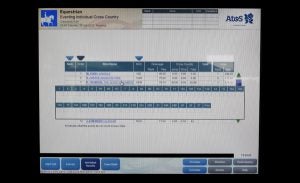 Each of the teams of computers set to run the events is currently being tested at a secret location in Canary Wharf. We can’t tell you where it is, but it is up high enough for the high-speed elevator to leave your ears popped.

Stacked three tiers high and manned by a crew of tired-looking technicians, these computers are subjected to bank after bank of test routines. We’d like to imagine those routines include simulations of mid-event natural disasters and Jack Bauer-style scenarios, but sadly our tour guide wouldn’t be drawn on the subject. Each event has its own area within this section of the LOCOG HQ, called the Integration Test Lab, turning this high-rise office space into a microcosm of the Olympic Park.

Here’s how all the computers will eventually be divvied-up, within the key locations of the Olympic site:

The computers themselves are mostly unassuming compact desktop units, intended to provide plenty of processing power while taking up just a fraction of the volume of a full tower PC, although many notebooks and full-blown servers are involved too. Other computers will also be sent across the country, to the LOCOG satellites, based wherever events are held.