Just imagine if Nintendo and Sony had made this beautiful baby…

Last week offered up a truly incredible retro gaming find – the SNES PlayStation. This astonishing piece of video gaming history might sound like some kind of inane practical joke, but it’s the real deal. Had things gone a little differently over 20 years ago, we could have been talking about it today in the same reverent tones as the actual 32-bit PlayStation itself.

The unlikely story of the SNES PlayStation begins in the late ’80s. Around this time Sony was working with Dutch company Philips on the CD-ROM format. CDs need no introduction now, but at the time their ability to hold huge amounts of data was a revelation to gaming companies struggling with the restraints of cartridges. Nintendo wasn’t the first to show interest, but it was by far the biggest gaming company out there.

Sony had prior form with the Kyoto-based giant, too, as the two had previously worked together on the Super Nintendo’s revolutionary sound chip, the SPC-700. The brainchild of talented engineer Ken Kutaragi – the man who would later earn the title “Father of PlayStation” – this chip bestowed Nintendo’s world-beating 16-bit console with audio that was amazingly close to CD quality.

Nintendo was clearly pretty pleased with Kutaragi’s work because when it began planning a CD-ROM drive for the SNES, it hooked up with Sony once more. 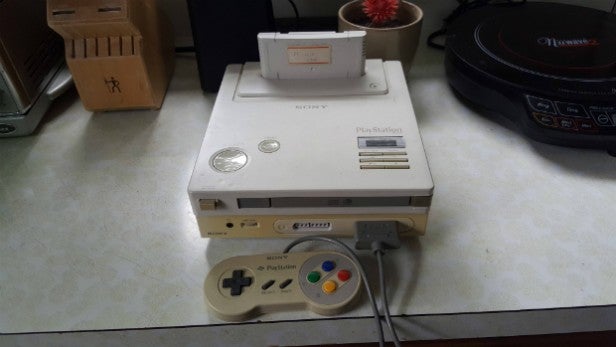 Sony and Nintendo: A match made in heaven?

To set the scene a little better, it’s worth recounting the lay of the land back in the early ’90s. Cartridges were the dominant delivery method for games consoles, but were expensive to produce and limited by the amount of data they could store. The largest games only used 48Mbit (6MB) cartridges, and the higher the capacity the more expensive the game was to produce.

Unsurprisingly, hardware manufacturers and games publishers were keen to find another solution and the CD seemed perfect. Small, cheap to produce and able to store many times more information (up to 700MB) than a typical cartridge, the CD was first harnessed as storage medium for interactive entertainment in the ’80s.

In the games arena, it was Japanese company NEC that got there first with its PC Engine CD-ROM add-on in 1988. Sega would follow suit with the Mega CD a few years later, and Nintendo – not wanting to be caught napping – also ploughed plenty of cash into developing its own CD-based hardware. 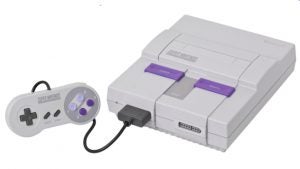 Sony, meanwhile, badly wanted a route into the lucrative gaming market. The company was a giant of the electronics world, but had failed to make much impression on the gaming sector so far.

When the Nintendo Game Boy handheld console launched to staggering commercial and critical success in 1989, it is said that one disgruntled Sony executive lamented that it should have been a Sony product.

Sony desperately wanted a slice of the big, fat gaming pie that Nintendo and Sega appeared to have all to themselves. After failed attempts to gain a foothold – supporting the ill-fated MSX computer standard in the ’80s and establishing the lackluster Sony ImageSoft publishing brand being just two examples – the company’s relationship with Nintendo seemed to be the best option. 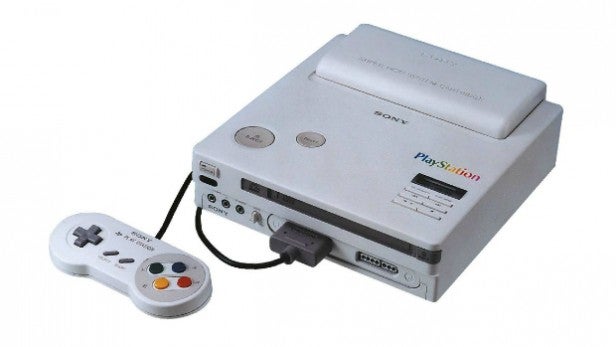 Artist impressions of the Sony-made CD-ROM attachment began appearing in magazines almost as soon as the SNES hit Japanese store shelves in late 1990. Its specs were impressive, and it would have placed the already potent 16-bit console leagues ahead of its closest rival, the Sega Mega Drive. However, Sony and Nintendo’s relationship was a rocky one almost from the beginning, with neither company wishing to cede dominance to the other.

On one hand there was Nintendo and its famously power-hungry boss Hiroshi Yamauchi – the man who had little interest in video games beyond their potential to generate cash, and who had cannily changed the company from a humble toy maker to a global gaming behemoth.

On the other was Sony, one of Japan’s most famous corporations and a firm that had achieved international renown thanks to its excellent line of TVs, stereos and the iconic Walkman. Nintendo would benefit from Sony’s expertise with CD-ROM technology, while Sony would gain a valuable foothold in an industry that had thus far largely ignored it. The trouble is, neither firm was flexible enough to make this arrangement work.

The initial deal was that Sony would manufacture a CD-ROM attachment that would bolt onto the bottom of the SNES system, just like the Sega Mega CD did with the Mega Drive. Sony’s new CD-ROM standard – Super Disc – would be used for the games, and as a result, Sony could claim licensing fees from every publisher that produced software for the system.

That deal also permitted  Sony to produce its own stand-alone console that bundled all of this hardware together into one machine – just as JVC did with its obscure Wondermega console, which was a Mega Drive and Mega CD combined – and thereby gain its coveted place in the video games industry. That all-in-one console was, in case you hadn’t guessed, the SNES PlayStation. 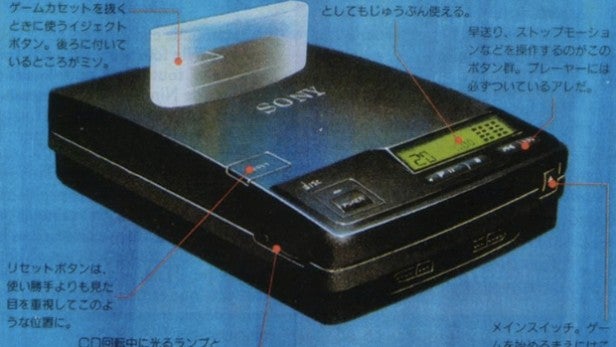 It was an arrangement that didn’t satisfy Nintendo, a company that was famously aggressive when it came to extracting licensing fees from publishers who produced games for its consoles. These fees pulled in millions of dollars of revenue for Nintendo each year, and the notion of sharing this booty with Sony – a company that had no experience of working in the gaming hardware sector – clearly didn’t sit well.

Sony’s intentions were clear – it wanted a route into the gaming market and if the union were a success, Nintendo would have effectively created a new rival at its own expense. As a result, the wily Yamauchi approached Dutch firm Philips and started secret negotiations on producing an entirely different CD-ROM attachment for the SNES – all while Sony was charging forward with its own plans.Things came to a head at the 1991 Consumer Electronics Show. Sony proudly used its press conference to lift the lid on the Super Disc format, the SNES CD attachment and the jewel in the crown – the stand-alone SNES PlayStation system with which it hoped to become a major player in gaming sector almost overnight.

The next day, Nintendo well and truly piddled on Sony’s strawberries by revealing to the assembled throng that it had inked a new deal with Philips to produce a CD-ROM drive for the SNES.

Just as he had done so many times before with publishing partners, Yamauchi had humbled Sony and put the company in its place. This audacious double-cross was coolly calculated and intended to illustrate who was boss in this particular situation, but it would backfire dramatically.

Despite popular belief, the 1991 CES show didn’t bring the hammer down on the shaky alliance between Sony and Nintendo. The two companies – now slightly less trusting of one another – continued to negotiate a deal, eventually agreeing that the SNES PlayStation could still happen, but the licensing arrangement was weighed more heavily in Nintendo’s favour this time.

It is during this period that a number of SNES PlayStation prototypes – like the one which was unearthed last week to such amazing online interest – were produced. Official images of the console even began to appear in the gaming press, an indication that things were finally headed in right direction.

However, by 1992 things collapsed; there were rumours that Nintendo’s continued negotiations were merely a ruse to stall Sony from entering the market. Frustrated by the lack of forward momentum, the alliance was broken. Nintendo’s deal with Philips also foundered, and to extract itself from the arrangement Nintendo allowed the Dutch company to use some of its properties in games for the Philips CDi console – none of which were any good.

See also: PS4 backwards compatibility – Can I play PS3 games on my PS4? 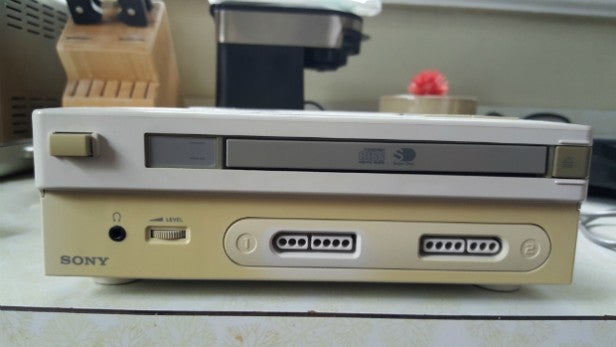 It’s at this point that the dogged resourcefulness of Kutaragi became apparent. The leader of the PlayStation project argued that the hard work already poured into the venture by Sony shouldn’t be squandered, and that the company should soldier on without Nintendo.

He also claimed that working with aging 16-bit technology was a mistake; the PlayStation should be based around a more powerful 32-bit processor and equipped with custom hardware that would allow for real-time rendering of 3D graphics similar to those seen in the latest arcade titles, like Virtua Fighter and Ridge Racer.

Sony’s board, already tired from the years of fruitless bartering with Nintendo, were unimpressed by such ideas and Sony president Norio Ohga seemed reluctant to spend any more cash on this project.

But Kutaragi then delivered the hammer blow – could a firm with such a proud history as Sony afford to allow Nintendo to get the upper hand after its shameful back-stabbing? The desire for revenge clearly hit a nerve with Ohga, as he gave Kutaragi leave to continue development on the PlayStation.

The rest, as they say, is history. The new, SNES-less PlayStation launched at the end of 1994 when Nintendo’s 16-bit console was entering its twilight years. Sony’s hardware was incredibly powerful and capable of handling intense 3D visuals at a time when 2D graphics were still the accepted norm. Developers and publishers flocked to the new console, and it went on to become the first home system to sell over 100 million units worldwide, establishing a gaming brand in the process.

Nintendo would soldier on with the cartridge-based Nintendo 64 system, which was more powerful than the PlayStation but was hampered by a lack of third-party support and a delayed released that saw Sony’s console soaking up a colossal amount of market share. Ever since this point, Sony has arguably been the more dominant force in the gaming arena; while the Nintendo Wii was the best-selling system of its particular generation, Sony’s other domestic systems have repeatedly outsold Nintendo’s over the past two decades. 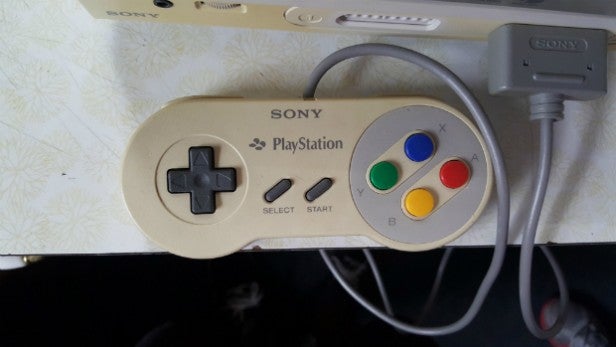 It’s tempting to wonder what the gaming market would have been like today had Nintendo and Sony settled their differences and the SNES PlayStation had actually made it to market. You could argue that the messy public break-up was the best thing for Sony; it gave it the determination to strike out on its own and create a highly profitable gaming dynasty.

Had Sony been beholden to Nintendo during the 32-bit era, there’s a good chance that it wouldn’t have achieved the same degree of success – and even if it had, it would have had to share it with notoriously overbearing Nintendo boss Hiroshi Yamauchi – a man who never felt comfortable sharing anything with potential rivals.

Nintendo, on the other hand, would have been free to fight for dominance with an increasingly erratic Sega, and would most likely have ended the ’90s in the same way it started the decade – in complete and utter control of the interactive entertainment market. Sony not taking the plunge might also have dissuaded Microsoft from taking the same risk with its Xbox system in 2001, resulting in a totally different gaming landscape.

Of course, all of this is idle conjecture and guesswork. What we do know is that the unlikely-sounding SNES PlayStation does indeed exist  in prototype form, at least – and very nearly became a solid commercial reality. And for modern gaming fans, that’s a fascinating thing to consider.