Resident comic book fanatic and Reviews Editor Alastair Stevenson visited the new comic book exhibition, The Impossible Collection, which features a number of first edition books, to get the inside story on the comics and how the exhibition came to be.

Comic books are awesome. Which means, logically, lots of comic books are even more awesome. This is the reasoning that motivates every hardcore comic fan to collect tiny paper books with near zealous enthusiasm and hide them from from the world in clear plastic bags.

To these people, the idea of sharing these treasures, of exposing them and risking their hallowed quality rating is a personal nightmare.

Except for Ayman Hariri, a man who’s sharing his priceless collection of first edition comics with the world.

The Impossible Collection is a public exhibition set to debut in London in the near future that will showcase over 1,000 first edition DC comics. It’s entirely owned by a man named Ayman Hariri and is being marketed as the largest public first edition comic exhibition in history.

The collection features first editions from some of DC’s most iconic heroes, including Superman, Batman, Wonder Woman, Green Lantern, Green Arrow, and the Flash. To make it easier for avid fans to see the comics’ history, the collection has been intentionally arranged to tell the books’ personal stories.

“To me they’re priceless, and [the collection] tells the journey each of these books takes through time, of everything they had to go through to be there with us at this point,” Hariri explained to TrustedReviews during a tour of the collection. 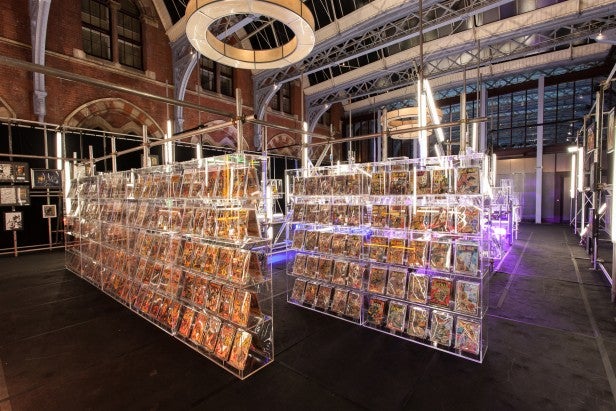 Key highlights include two Action Comics issue ones – the comic where Superman first appeared – and the issues of Detective Comics and All Star Comics where Batman and Wonder Woman made their respective debuts. For arty types there’s also walls full of original artwork from milestone titles like Kingdom Come and The Death of Superman.

For non-comic folks, this means Hariri’s description of the collection as “priceless” is pretty darned accurate. The collection hasn’t been given a public value, but numerous titles in it are worth multiple millions of pounds.

The 20th Century in Comics

Impossible Collection curators Stephen Fishler and Vincent Zurzolo said they’ve also worked to arrange the books to show the cultural importance and evolution of comics as a medium.

“These characters [Batman and Superman] were mainly made by Jewish immigrants who were trying to get a message out through the comic books, to bring more awareness about the horrible things that were going on at the time to the rest of the world,” Zurzolo told Trusted.

“The World War Two comics, especially Batman and Superman, really resonate and teach us a little bit about that part of history,” he said. 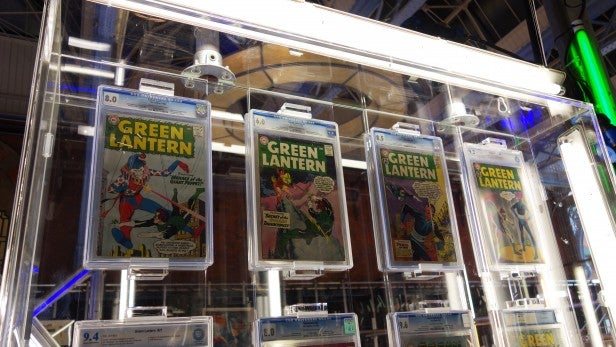 “The impact of Neal Adams’ Green Lantern-Green Arrow run is astronomical. It completely changed the focus of comics. It introduced elements to comics that were never there – racism, drug abuse,” he told Trusted.

Neal Adams’ Green Lantern-Green Arrow series was published in the 1970s. It is regarded as the first comic to examine race relations and drug addiction.

Prior to it the comic book code – a series of moral rules agreed by publishers which comic artists had to adhere to – prohibited the discussion of such topics.

Interestingly, Hariri claims he didn’t originally intend to share his comic collection with the public, but the huge fanfare around superhero movies, like Batman vs Superman inspired him to do so.

“I never came out and said, let’s build the biggest comic book collection, I just wanted to have pieces of history and love these characters. I wanted something from their origin, a part of where they came from, and it snowballed into something,” he told TrustedReviews.

“That’s why we decided it would be a great time, given this fantastic movie is coming [Batman vs Superman], to give people access, to let them know it exists.” 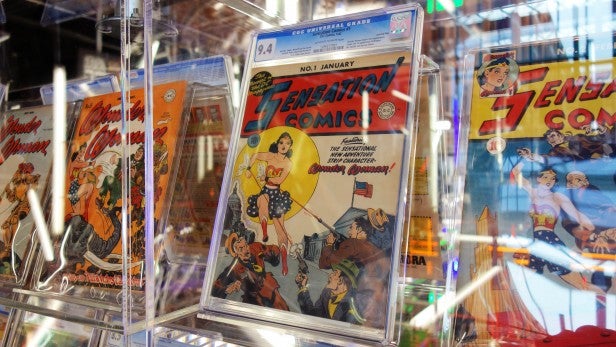 Hariri himself cameos in Batman vs Superman and shared many of his comics with its cast, to give them added insights into the characters they play. His experience on set is what led him to start collecting Wonder Woman.

“I remember I went to set and I had my books with me to show people. Zack was kind enough to introduce me to Gal Gadot, [who plays Wonder Woman in Batman vs Superman]  when she walked in,” he said.

“She looked at them and then at me and went ‘oh, no Wonder Woman’? I had to make the balance right in the universe, so I called up Steven and asked him to get some Wonder Woman books. We were lucky enough to get Sensation Comics issue one, the first cover with her on it.”

Hariri’s love of Superman is similarly personal, but stems from a more tragic origin.

“My father was the Prime Minister of Lebanon and for me, in my life, was an embodiment of what it means to have great power and use it to do good. He put 30,000 students through college off his own back. To make that decision is phenomenal,” he said.

“I had never owned a Superman book before my father’s passing. But afterwards I wanted to own as many as I could. Not just because I felt he was an aspirational character like him. I acquired the Death of Superman after his death.

“It was a very large car bomb, that caused massive damage to the city. So some of the imagery of the city during the Death of Superman really spoke to me. I looked at them and felt, that’s what I was going through at the time.”

But it very nearly didn’t happen

Although Hariri, Fishler, and Zurzolo managed to track down the the first issue of Sensation Comics fairly easily, many of the collection’s other titles proved more elusive.

The collection took 16 years, and more than a little luck to form, as many key bits of comic history have been destroyed, or lost.

“I remember Bob Kane told me he used to have the original cover to Detective Comics 31, but when he got divorced he lost the entire Batman one art and she threw it all out in the mid-50s.” 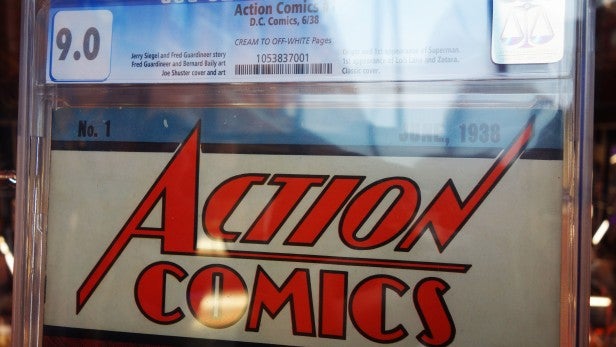 Zurzolo highlighted the Action comics journey through history as being particularly troubled.

“But that evening he turned it off so he could show them to all of his friends. Apparently one of his staff stole several books, including Action one and it laid dormant for 13-14 years.”

The comic was only found due to a mix of luck and Fishler’s photographic memory. 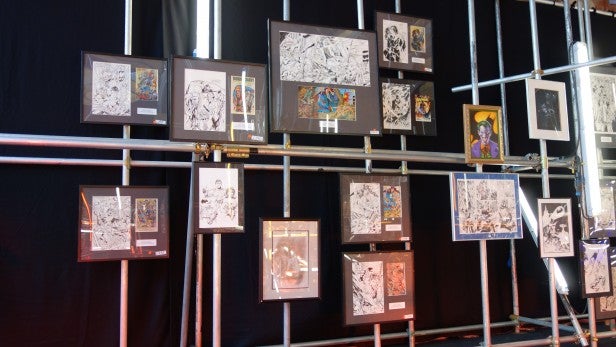 “But then, one day we got a call from somebody out in California telling us they had an Action One for sale. So they sent us a picture. My partner Stephen Fisher has a photographic memory, so the moment he saw it he recognised it as Nicolas’ copy,”

“If you look at the two we have [in the collection] one has a very thick blue head, but the other has white specks. That’s actually a printing flaw and it acts like a fingerprint,” he told Trusted.

“So we called the detective who had been on the case 14 years prior and Nick and told them what had happened. They went to meet the next day and the person gave it back and Mr Hariri later bought it.”

Hariri highlighted a 1940s Batman movie poster as further proof how much of the collection only exists due to tremendous luck.

“A lot of these it’s complete luck they’re in this good condition. No one when they were first printed thought they’d be worth something in the future if they were in mint condition, and it’s not just the books too,” he told Trusted.

“We have a Batman movie poster that wouldn’t exist if it had ever been shipped in the collection. So, for us to have it here, someone must have forgotten to ship it, or it must have been sent to the wrong place. If it hadn’t it would have been glued to a wall or billboard and destroyed when it came down. But we found it at the back of a movie theatre and it’s here, now, in the collection.” 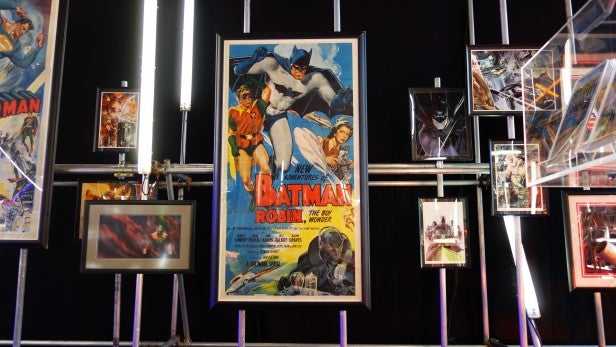 Show me the comics

The exhibition is set to debut in London and will be open to the public in the near future. Hariri couldn’t give an exact date due to unspecified logistical issues. Those keen to go can get updates on the collection, as well as titbits of info about the issues and works being exhibited, on Vero, a social network started by Hariri.

“The public event’s details will come out soon, we just need to sort out a few logistics, which as you can imagine are pretty complex. But, it’ll start in London,” he told Trusted.

“I’m also CEO of Vero, a new social network, so once we have dates, we’ll use that to broadcast information and content about the collection and tell the stories behind the books. You can only imagine the breadth and dimensions you can go into with these books, the heroes, the villains.”