How to survive in The Elder Scrolls Online

The Elder Scrolls Online is a fine MMORPG, but it has a learning curve. Come to it expecting another chapter in the Elder Scrolls saga and you could be in for a nasty shock.

Even if you’ve played World of Warcraft, Guild Wars 2 and Star Wars: The Old Republic, you’ll find that there are things that TESO does differently. To keep pushing forwards you’ll need to get to grips with the game, its mechanisms and its interface, plus all the ingredients that separate the classic single-player Elder Scrolls experience from the new MMORPG incarnation.

That’s where we can help, with a few hints, tips and tricks that can help your character survive, grow and prosper.

This isn’t Skyrim or Oblivion

We’ll say it again and again until we’re blue in the face, but TESO is a different beast from Skyrim or Oblivion. The odds are stacked higher against you, enemies don’t go up and down in level to match your level and your equipment, and you have different combat mechanics and magic systems to contend with.

TESO might have the same world and the same feel as Bethesda’s single-player fantasy masterworks, but try to play it like the lone hero who can save the world and you’ll find life in Tamriel a continual struggle. 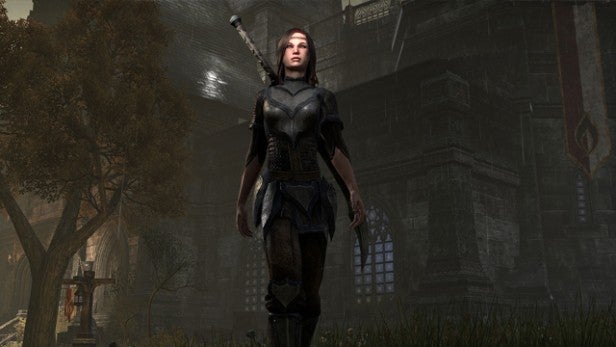 Think about your build

TESO still features these three roles, and they’re vital once you start playing in groups, but things work a little differently.

For a start, the four classes available to each race don’t necessarily snap to a specific role. You can be a Templar and work as a tank or a healer, or be a Dragon Knight and work as a damage dealer or tank.

What’s more, as you may end up playing some of the game solo, it’s sensible to go for a more versatile hero. The key is to work out the best combinations of race and class, then – as you level – prioritise the skills, attributes and equipment that will help you do a better job in your favourite role. 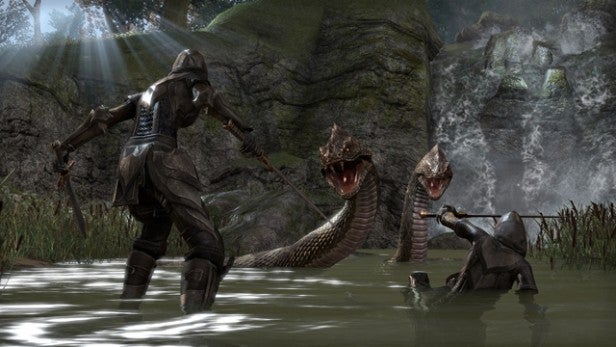 Learn how to fight

In TESO, the old ‘stand around and hammer the hotkeys’ routine that works so well in so many MMORPGs no longer functions. You need to think about your position while you’re fighting, keep your enemies in view, and – most importantly – block, dodge and interrupt.

If you see an enemy winding-up for a killer blow or a telltale area-of-effect market appearing beneath your feet, then double-tap a movement key quickly to dodge. Alternatively, use the right-click block to take the sting out of the incoming attack, then left-click to interrupt the next one. Don’t block, dodge or interrupt and you simply won’t survive the more difficult fights.

If you’re going into a combat-heavy quest or a dangerous area, sort out your hotbar first. At any time this can house five spells or abilities and one ultimate ability, specific to your class. You need to make sure that you’re using the most effective set of abilities, which might not necessarily be the most recent abilities you’ve unlocked.

As a rule of thumb, if you notice that you’re not using a spell or ability in battle, replace it with one that you will. It’s also vitally important that you use the quickslot for your potions and consumables. Press I to open the inventory screen, press Q to open your quickslot radial menu, then drag health, magic and stamina potions into the slots provided. 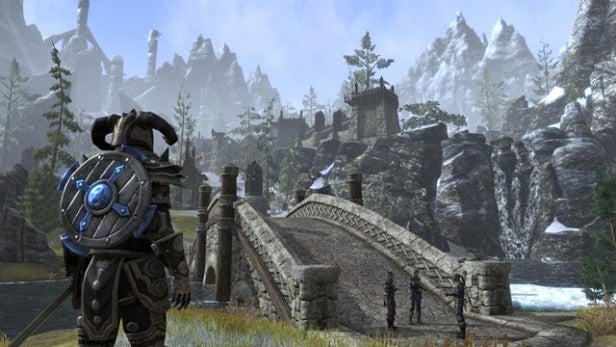 You won’t get far in TESO just by grinding away at monsters for XP; if you want to level fast, you need to quest. Quests dish out more experience points and you’ll get better equipment faster, making questing the most efficient way to spend your time in-game. Try to take on as many quests as you can, and always have several on the go at once. In many cases you can have multiple quests running at once in a single area, saving you a lot of time going back and forth between quest-givers in the city or hub areas and the areas where most quests take place.

Joining the Fighter’s Guild or Mage’s Guild, not to mention groups like The Undaunted, can be a really good idea in the early game. You’ll get rewarding quests, and you’ll be pushed to explore areas you might not otherwise explore.

You may be sent on missions that you’re ill-equipped to deal with, but if so just save them until later, then tackle them when you feel prepared. Don’t bang your head against a brick wall.

TESO can be tough, and sometimes you’ll find yourself in situations you can’t handle, or on a quest where you’re battered down time and time again. Don’t keep going back for more punishment – take a breather and try something else.

Sometimes a different approach – a change of strategy or a different selection of weapons, spells and abilities – will win the day. If not, go away and come back once you’ve levelled up a bit. The joy of Tamriel is that there’s always something else to get on with, and even the most desperate story mission can usually be put on hold while you tackle something else. 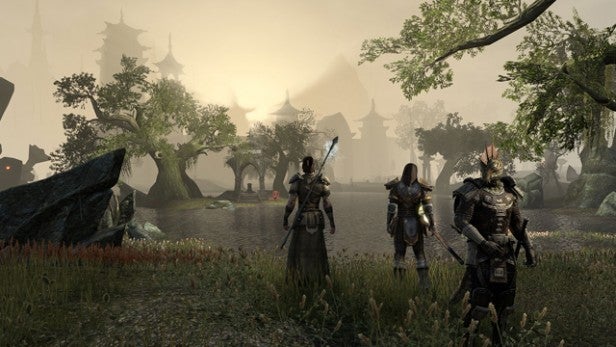 Skyrim and Oblivion are solo adventures. TESO is not. You can play a lot of it on your tod, but you’ll find some areas and missions overwhelming if you play them on your tod. Here there are two approaches.

One is to use the built-in group invite and group search tools – press the P key – to find a group of like-minded individuals to fight with, if only temporarily. You might even like some of them, in which case you can add them to your friends list.

The other is to group in a more ad-hoc manner, joining in the fray in areas where players congregate, or helping players out when you both happen to be on the same mission. You’ll often find that, working together, you can tackle quests that would have you pulling your hair out in frustration on your own.

Tamriel is jam-packed with useful stuff, including skill point-boosting skyshard fragments,  attribute-boosting mundus stones and a whole wealth of tomes, treasure chests and item caches. If you don’t go off the beaten track and just explore, you won’t discover them, and you’ll lose out on one of the easiest ways to power up in the early game.

While you’re at it, keep some lockpicks handy for those chests. 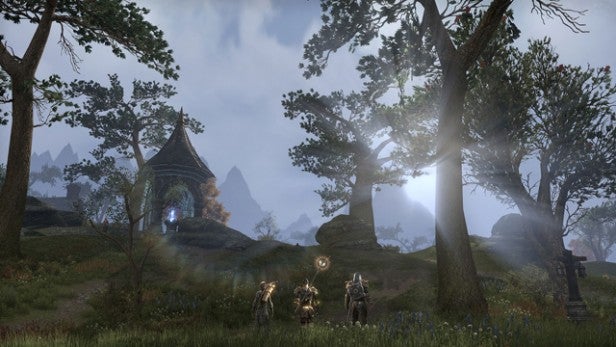 Enchant your weapons and morph your abilities

TESO’s rather obtrusive in-game help doesn’t do a great job of explaining either of these useful activities. After you use a particular spell or skill a lot and gain enough experience in it, you can morph it so that it’s even more powerful and useful.

Morphing will cost you a skill point you could use to gain a whole new spell or ability, but just ask yourself: would you rather have one weedy new ability, or a super-potent one that kicks some serious monster butt.

Similarly, remember that weapons and armour can be enchanted with glyphs, adding extra damage or knock-on damage effects, or increasing the protective powers of items or armour. You can also craft your own glyphs in the game by gathering and combining runes.

Get an Ultimate Ability as soon as you can; they’re class-specific and you earn them by using and unlocking spells and abilities in the same line as you level. While you can unlock several, you can only have one on your hotbar at any time, and they have a pretty lengthy recharge time, as they’re not powered by stamina or magicka like your other skills and spells.

However, to balance these out they can be hugely useful in the game’s more awkward battles. Don’t ignore passive abilities either. These can dramatically ramp up the effectiveness of your spells or offensive skills, or even help you regain health, stamina and magicka during combat. 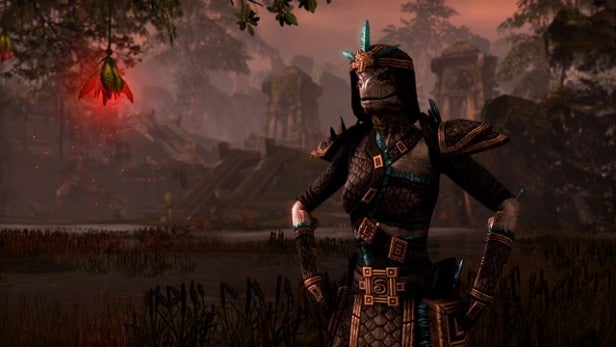 Do the dungeons and embrace PvP

TESO sensibly separates its Player vs Player (PvP) elements away from the main game, and throws in large, more challenging dungeons aimed specifically at small or large groups. You’ll unlock PVP content at level 10, at which point you can warp to the embattled territory of Cyrodil and take part in faction vs faction quests.

PvP has its own quests and siege events, and while you’ll find the going extremely tough as a level 10 noob, you’ll also find rich rewards in terms of skill gains and experience.

Dungeons, meanwhile, are a mainstay of group content, and a great way of meeting other players. Once they become available, you can even look for dungeon-focused groups to join from the Group menu (press P to see it). There’s an introductory dungeon in each alliance’s starting area, and they’re designed for players of level 12 to 15. Even if you prefer solo play, they’re worth exploring, as again the XP rewards make it all worthwhile.