This week the popular BitTorrent site UKNova was ordered to shut down its torrent trackers by the Federation Against Copyright Theft (FACT). This may be seen by some as a victory against online pirates, but UKNova was a relatively benign entity and its loss may force its users to less well regulated areas of the internet.

It is hard to get too worked up about the loss of a torrent tracker that shares copyrighted material. After all, in most countries the sharing of copyrighted materials is an offence and whatever you may think of that, it cannot be a surprise to anyone running or using a torrent site when a site is discovered by the authorities and shut down.

UKNova, however, was a bit different. It had a code of ethics to which it rigorously adhered and its members are now feeling the loss of a unique service for which there is no legal replacement.

UKNova was founded in 2003 by a group of TV fans who wanted to share British soap operas. The site quickly established itself as a favourite among British expats who valued the link to their old home and US Anglophiles who were impatient with the meagre selection of shows they could see in the US.

Over time, Eastenders and Corrie were joined by sitcoms, drama and documentaries. UKNova started offering torrents of radio programmes too. The Archers and Radio 4’s wide range of other dramas and comedies as well as classic radio serials. Users could post requests for older shows and members would try to fill them by digitizing VHS tapes and C90s taped at the time. It became a community.

So far, so much like any other torrent site. What set UKNova apart was its rules. Most torrent trackers lay out rules to members about ratios – you should always try to upload more data than you leech from a torrent to help other members. UKNova was no exception, but the site administrators were also very strict about not allowing any programmes to be uploaded that were commercially available. 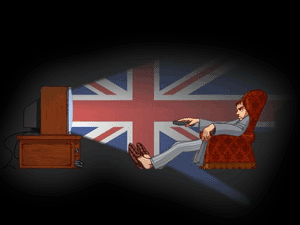 From UKNova’s ‘About’ page: “It is one of the fundamental principles of UKNova that we do not wish to cause any harm to potential revenue streams for broadcasters and programme makers. For this reason, no television or radio programme that is available for purchase worldwide from retailers, on CD, DVD or video, is allowed to be shared on this website. Please do not ask for material to be uploaded here that is available to buy. Such material is not allowed.”

This may sound like the kind of self-serving boilerplate that sites add to cover themselves and maintain a veneer of respectability but UKNova really did stick to these principles. It was common for requests for new series to be ignored or explicitly denied because there was a published release date for a DVD. Popular torrents of classic shows were unceremoniously yanked when they became available to buy as a box set and ongoing series’ were often cut short after just a few episodes hit the trackers because a DVD release was scheduled. The site forums even banned links to other sites containing the shows that UKNova refused to carry.

FACT ruled that this was not enough. Last week, UKNova site administrators announced that they had received a cease and desist notice from the industry lobby group relating to several torrents including content from a major satellite broadcaster (described as a “tiny fraction of their basic package”). UKNova acted swiftly to remove the offending torrents and asked FACT to clarify if there were any other offending links on the site. FACT’s response was typically hard-line. “ALL links or access to content provided by UKNova are infringing, unless you can prove that you have obtained explicit permission from the copyright holder for that content.”

While technically true, the majority of torrents on UKNova were from the BBC and the other terrestrial channels – none of whom are FACT members. Nevertheless, FACT’s recent victory over TV link site SurfTheChannel which led to its founder, Anton Vickerman, being jailed for four years must have given the UKNova admins pause for thought and they have reluctantly agreed to shut down their torrent tracker.

It may be that FACT’s actions in pursuing torrent sites will have a positive effect for the TV, Film and Music companies which it represents but putting aside the complained about links – which UKNova were quick to take down – this does seem like a heavy handed response to a genuinely useful service. Looking at this as a TV licence payer, you have already paid for your share of the BBC’s TV and radio output. Downloading an episode of Doctor Who because you happened to be on holiday when it rolled off iPlayer does not seem like a high crime. If someone wants to keep up with Coronation Street during a long hospital stay, what difference does it make if they do so using downloads played on their iPad versus taped episodes watched when they get home (with adverts fast-forwarded through), other than the comfort it gives them at the time?

An argument can be made that allowing downloads of a programme for even a short time will impact DVD sales. The counter argument is equally simple – so does showing programmes on TV in the first place. If a viewer decides to record Spooks on their PVR and keep a copy forever, how is that different from downloading it? In a sense it is worse because the quality will be exactly as broadcast rather than transcoded into a more portable format. By downloading an episode of Have I Got News For You, you end up with an AVI or MKV file, possibly with a separate file of subtitles if anyone has bothered to make one. Buying the series DVD is still an option – for that you get a physical disc, artwork and packaging plus extras and an easy to navigate menu system. If you have anything more that a transitory interest in a programme (the kind satisfied by watching it live, time shifting or downloading) then it is still worth buying.

These are old arguments in the piracy wars, but with UKNova they feel particularly apropos. Nobody at UKNova was getting rich from running it. The site survived on donations, which were used only to pay for hosting and bandwidth. Equally, nobody at the TV companies were getting paid either. Might it be possible for a site like UKNova to exist legally? By operating with copyright holders consent a site could charge a small subscription, or even run on ad revenue, and give some money back to the people producing the shows that they love to watch and listen to.

With UKNova out of the picture and no equivalent service being offered legally, it is likely that many of its former members will look elsewhere for their TV fix. This will inevitably lead them to sites that offer many more valuable commercial properties for download.

There are ways you can legally buy access to some of the content that UKNova was torrenting, but by no means all. In particular, the site was a goldmine for classic TV and radio with niche appeal that will probably never warrant a DVD release. For many expats and Anglophiles, UKNova was the best way to stay in touch with the UK’s rich TV and radio culture. For UK residents, it worked like an unofficial time shifting service – iPlayer, only better. FACT has made UKNova go away, but not the love of TV and radio that made it work. Now that the UK’s only ‘ethical’ torrent site has gone, what kind of sites will fill the gap?