It seems as if wireless charging has been the next big thing for years now, but we could actually be on the verge of a breakthrough. No, seriously this time.

Back up a step. What do we mean by wireless charging? Quite simply, it’s the ability to charge your smartphone or computer device without physically plugging it in using one of those chargers you’re always mislaying.

Wireless charging is nothing new, of course. Electric toothbrushes have been using the same mechanism for years. But the spread of this technology into smart devices, as well as into public and retail spaces, is relatively recent.

It’s that wider application of the technology that will drive wireless charging to become ubiquitous, and it’s what we’re interested in here.

First up, let’s explain the basic premise of wireless charging.

All wireless charging standards currently on the market employ inductive charging. This involves passing an alternating current through a coil of wire in a charger, creating a localised electromagnetic field.

When a device with a similar coil is placed nearby, a current is created within the device, thus charging the battery to which the coil is hooked up.

The key here is that the two coils don’t need to be in direct contact, and the electromagnetic field can pass through plastic and glass over a distance of between 5mm and 40mm.

As we’ve already hinted at, there are multiple wireless charging standards on the market. Just as whenever any new form of technology comes along, there are many competing standards vying for supremacy – and only one or two will end up going mainstream.

Right now, there are two leading wireless charging standards that most people talk of: Qi and PMA. 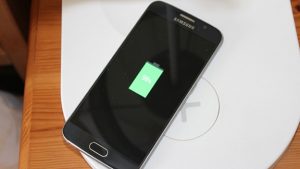 PMA, meanwhile, has found some support with retailers such as Starbucks, particularly in the US. These retailers are drawn to the PMA standard because the system creates a unique ID when used with a certain device.

This essentially allows retailers to track repeat customers, and to monitor how long each spends charging their phone.

They’re far from the first phones to feature wireless charging built-in, however. The Nokia Lumia 920 and all three Nexus phones from the Nexus 4 onwards support wireless charging, to name a few prominent examples. 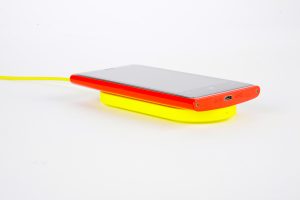 Of course, there’s a particularly prominent smartphone manufacturer that’s stayed out of the wireless charging field up to now. We’re talking about the biggest of them all, Apple.

Support for a smartphone standard from Apple can often go some way to accelerating that standard’s adoption, so this is a bit of shame for those who hate wires. And really, that’s got to be all of us, right?

Back in 2012, Apple’s Phil Schiller dismissed the idea of Apple supporting wireless charging when he said: “Having to create another device you have to plug into the wall is actually, for most situations, more complicated.”

Fortunately, there are a couple of (admittedly slender) reasons for hope on the Apple support front.

As we’ve discussed, Apple doesn’t support any of the wireless charging standards at present. Except it kind of does. It just doesn’t shout about the fact.

The Apple Watch has been found to be a closet Qi user. Its inductive charging system is based on the Qi open standard – it’s just that Apple hasn’t marketed it as such.

This can be seen by the fact that the magnetic Apple Watch charger works with the Qi-enabled Moto 360 smartwatch. 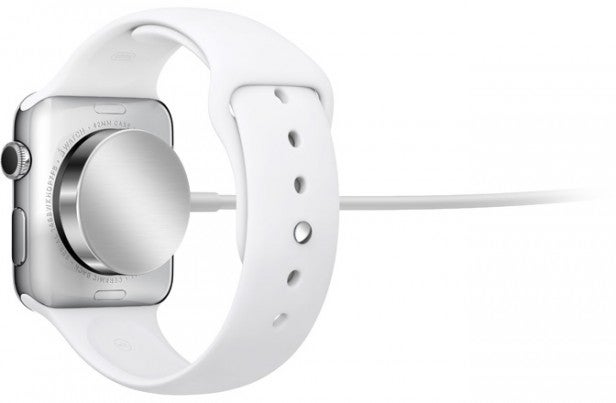 So, Apple now has the will and the know-how to implement a wireless charging system in its devices. Might we see this manifesting itself in future iPhone models?

One issue is a simple physical one. Apple phones tend to be mostly made of metal, and most established wireless charging standards don’t play nicely with metal. It’s that whole electromagnetic field thing.

However, Qualcomm recently announced that its own Rezence wireless charging standard (yep, that’s another one) could now deal with metal-bodied phones.

It achieves this by using a higher frequency than other competing standards, allowing its signal to pass more easily through metal.

With more and more manufacturers turning to metal for their phones, it’s good to know that this style choice won’t necessarily compromise wireless charging support in future.

Let’s not beat around the bush here, the adoption of wireless charging standards into smartphones has been pretty nominal. Let’s take a selection of the current flagship smartphones that have been occupying our headlines in recent times.

The iPhone 6, the Samsung Galaxy S6, the LG G4, the HTC One M9, the Sony Xperia Z3+, the Motorola Moto X, the Nexus 6, and the OnePlus 2. Of those eight phones, only two have wireless charging support out of the box.

And those are just flagship phones. Travel further down to the much larger mid-range and low-end smartphone markets, and the picture is dramatically worse for wireless charging support.

That’s not the only issues to address here. It’s still a very inefficient way to charge devices and tends to be slower at powering up your phone than it would be plugging into the mains.

What’s needed is for wireless charging to move out of luxury status and into must-have feature territory. That’s only going to come from wider support.

That aforementioned retail support is one thing, and there are positive signs here. Ikea has started selling furniture with Qi charging built-in, such as the Ikea Varv table lamp.

If your coffee table charges your phone, you’re going to gravitate towards a phone that supports it, no?

Samsung is obviously throwing its considerable weight behind wireless charging in the smartphone category, but it’s also backing it up in other areas. It recent announced the SE370 monitor range, which features Qi charging built into its flat base. 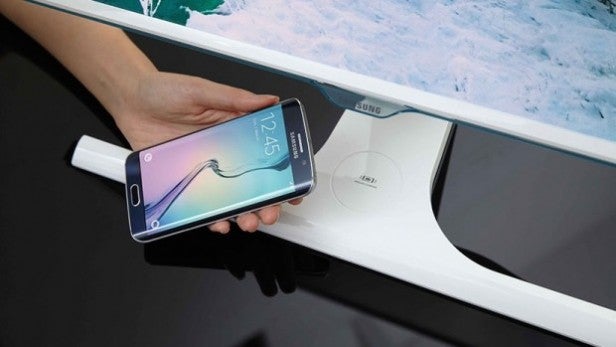 And that breakthrough is coming, according to Intel.

“All coffee shops, cafes, airport lounges will offer wireless charging points,” he said. “It will become like Wi-Fi hotspot points were in the 2000s.”

The Wi-Fi analogy is most apt here. Like Wi-Fi, a single standard of wireless charging needs to be agreed upon, and a public infrastructure built around it so that we can banish those pesky wires for good.

Are you a fan of wireless charging? Let us know your thoughts on the technology in the comments section below.