Following months of speculation, Tesla CEO Elon Musk has announced the new Tesla Energy company and the Powerwall home battery units, Musk says his new invention can play a part in eliminating global carbon emissions through solar power. It might just save the world, but as a bonus, you’ll never have to miss the footy if there’s a power cut. Here’s what you need to know…

Tesla Powerwall: What is it?
The Tesla Powerwall Home Battery, announced at the company’s Hawthorne campus on April 30, is a stationary battery pack designed for use in the home and is Telsa’s first major product launch outside its line of increasingly popular, luxury electric cars. The Tesla CEO says it and the new, wider Tesla Energy platform will create a “fundamental transformation of energy use across the world.”

The “completely sustainable, zero carbon” Lithium-Ion Powerwall, which mounts ‘seamlessly’ on the wall, is designed to provide a back-up power source during outages, to enable money-saving through load shifting and importantly enable the storage and consumption of energy harnessed through solar power.

The Powerwall, which Tesla describes as ‘The Missing Piece,’ in the energy puzzle can be charged via the existing power grid or through renewable energy sources like solar. Musk hopes the latter will be the key application.

Tesla Powerwall: What does it do?
The Powerwall’s applications stretch well beyond power outages and emergencies, although the ability to stay connected during storms, natural disasters and other emergencies will be a major selling point.

It’ll also those save homeowners a tonne of cash on their electricity bills with the so-called load shifting. As electricity costs less at night than it does during the day, users will be able to charge up their Tesla battery during the night and then use it to power their homes during the peak times.

Just as the Powerwall can be charged at night for daytime use, they can be charged by solar power during the day to power home appliances day and night. So it’s very much a green solution and a key element in the battle to end reliance on fossil fuels; an issue very close to the Tesla CEO’s Elon Musk’s heart.

For some users dependent on solar power, it may allow them to get completely off the grid: “The battery can store surplus solar energy not used at the time it is generated and use that energy later when the sun is not shining,” the company says in its press release. 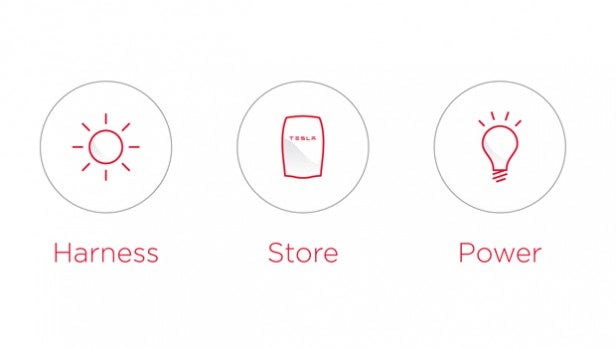 Tesla Powerwall: Specs and design
The Powerwall residential battery is built from the same Lithium Ion cells that power cars like the Model S e-car. It consists of those highly-advanced cells, a liquid thermal control system and software that can receives commands and can interact with solar panels through an inverter.

It’ll be wall mountable in a garage or flat against any wall (indoor or outdoors), has integrated safety systems and as thus will not require users to have a separate battery room. It’s relatively small too, with dimensions of 1300mm W: 860mm D:180mm.

Users will be able to stack up to 9 of them for ultimate energy storage capabilities.

Tesla Powerwall: How much does it cost?
The Tesla Powerwall comes in two models for residential users; a 10kWh unit, which the firm says has been designed for back-ups during outages. That’s the more expensive of the two and it costs $3,500 (around £2,281). The 7kWh unit, which has been designed for daily use, such as in the load shifting and solar consumption applications is $3,000 (around £1,995). These prices don’t include installation, but the eventual savings on energy bills mean the Powerwall should pay for itself multiple times over down the years.

Reports prior to the event had suggested Tesla has teamed up with Pacific Gas and Electric in California to offer buyers a subsidy. The reports suggested it would be a $1,500 up front with users paying $15 monthly payments for at least a decade. However, that proposition wasn’t mentioned during the event. 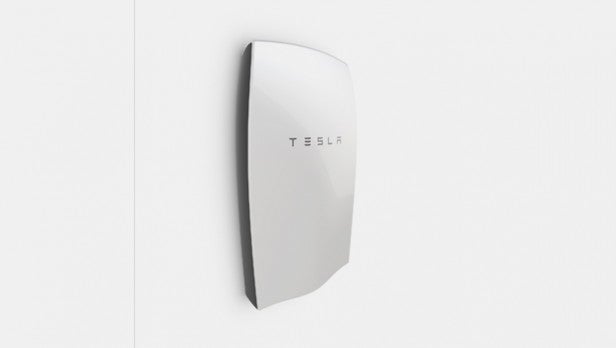 Tesla Powerwall: Who is it for? Should I buy one?
Naturally homes already set-up with solar panels will be prime customers for the Powerwall. It’ll doubtless appeal to the environmentalists who drive Tesla’s cars, but also to those who can’t stand the thought of a power outage interrupting their internet connectivity or television schedule.

Providing it becomes available in their locale, the Tesla Powerwall will surely become a consideration for forward
thinking home owners with the spare cash to make the investment. Of course, it’ll be better in areas where there
is plenty of sunlight so while Los Angeles residents might think about
it, those in Manchester, UK may not.

Tesla Powerwall: When is it available and to whom?
Both Powerwall  models are available to reserve now from Telsaenergy.com and will begin shipping within 3-4 months. Musk says production will be slow initially, but will be ramped up next year when the company switches to its ‘Gigafactory’ in Nevada (see below). Tesla says it’ll be installable within the hour by two people.

Tesla has a partnership with Green Power Mountain in Vermont among other green energy companies around the United States. It’ll also be available in Germany and Australia by the end of the year, but there’s no news yet on a UK launch.

During the event, for which Musk appeared over an hour late, he claimed it’ll be a great solution in remote parts of the world where there are no/unreliable wired power options or where electricity is prohibitively expensive. As the Powerwall and solar panels are all that’s needed, Musk says this will be similar to cellphones and landlines, where landlines are no longer installed in remote areas due to prominent mobile presence.

Some Powerwalls are already out there in the market as Tesla has been testing them with SolarCity customers in California, while the company is looking to expand aggressively into businesses in 2016.

Tesla Powerwall: Where will it be built?
Following the initial production runs, the battery packs will be constructed at Telsa’s yet-to-be-completed $5 billion “Gigafactory” just outside Reno in Nevada. Tesla was given a whopping $1.3 billion in tax incentives to build the 1,000 acre facility, which is larger than all of the Lithium Ion battery factories in the world… combined!

The Gigafactory will be able to bring the cost of manufacturing the batteries down by around 30 per cent due to larger scale operations, it has been claimed.

At the event, Musk says this will be “Gigafactory v.1,” and said many more would be needed in order to create the volume of batteries necessary end the global reliance of fossil fuels. He wants companies around the world to help out and says Tesla’s tradition of open-sourcing its patents will continue. 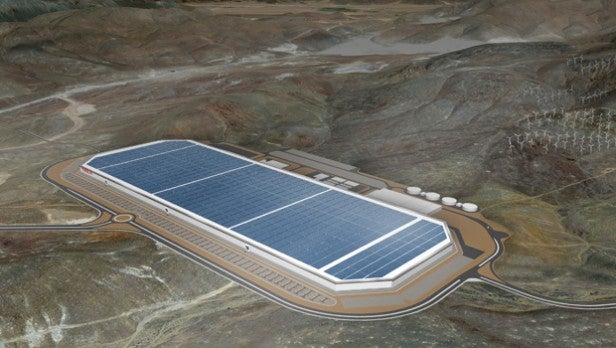 Telsa Energy: What else is coming?
Musk’s vision doesn’t end with residential and small business use. He wants the whole world to run on batteries charged by solar sources. The so-called Powerpack is an upscaled version of the Powerwall, which Musk called an “infinitely scalable system” that can be configured to power utilities and industries.  “Our goal here is to change the way the world uses energy at an extreme scale,” he says.

Musk reckons 160 million Powerpacks could power the entire United States, while 2 million could provide renewable energy for the entire world. That’s about the same number of cars as currently on the road. A lofty goal, but an achievable and essential one, Musk says.