It’s hard to argue that VR has set the world on fire. We’re two years on from the launch of both the major PC VR headsets and the gaming industry is still waiting for VR’s killer app. Not only that, but most of the hardware is still hideously expensive while still (we’re told) representing a shadow of what the future technology will be capable of.

Terra Virtua, a new VR platform-cum-Netflix-style games subscription service, doesn’t have a solution for these problems. What it does do, however, is attempt to unite the disparate pieces of VR hardware that are out there (think Oculus, Vive, and numerous mobile VR efforts), and bring them into a shared ecosystem, complete with friends and games on tap.

There aren’t that many VR gamers out there just yet, so Terra Virtua’s thinking is that a single ecosystem will focus the resources that are available and bring players and developers together into a single VR community, rather than a fragmented one.

Even mobile AR players will be able to get in on the action via an augmented reality companion app that will allow you to peer inside exactly the same virtual spaces and communicate with friends as though you were there, in virtual reality, with them. 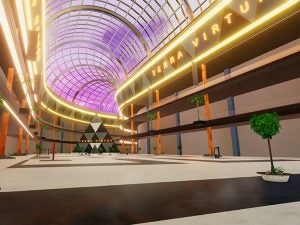 Once in the same world, all of these players can then move from game to game — Terra Virtua says that this will be the initial priority, but that broader experiences such as live events and music concerts will come later — from within a shared software ecosystem, and access all of them for a single monthly subscription.

The platform is built upon the Unreal Engine, and Terra Virtua promises that it will allow VR developers to get up and running much more quickly than if they were going it alone.

It all sounds a lot like PlayStation Home, Sony’s bizarre and unsuccessful (if somewhat profitable) foray into the world of online social spaces. The difference here is that Terra Virtua has been given a fresh lick of VR paint, and more distressingly, a hefty dose of blockchain tech.

Yep, that’s right, Terra Virtua is the latest in a long line of startups to market itself as being blockchain-based, and of course it’s going to be raising funds via an ‘initial coin offering’ or ICO, which has fast become a quick and easy way for startups to raise capital without having to go through the pesky regulation that a traditional initial public offering (IPO) would involve.

So there’ll be a cryptocurrency called Terra. Developers will be paid in it, and purchase their ‘zones’ (read: levels) within the game world using the currency. The currency also has its uses for players, who’ll be able to  purchase add-ons, events and services (seemingly undermining the Netflix-style subscription service aspect of Terra Virtua, but I digress). 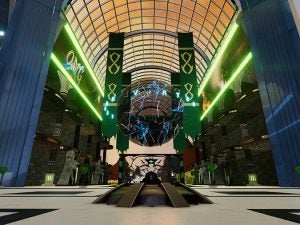 I was only able to have a brief look inside one of the platform’s zones, so I can’t speak to the quality of the overall experience, but the whole of Terra Virtua sounds overcomplicated by its blockchain integration at this point.

There’s a decent enough idea at the heart of Terra Virtua. Making a cross-platform multiplayer VR world is a cool idea, but I can’t figure out why it needs to rely on blockchain tech to track ownership, or why it can’t pay content creators in a normal fiat currency. 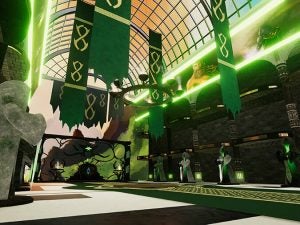 HTC Vive already has its own subscription service, Viveport, where users can get five games a month for a single subscription fee, and Steam has run an virtual item marketplace for years without the need to track ownership on a public blockchain ledger.

SteamVR Home already gives you a virtual hub to mingle with friends and hop from game to game in, and of all the reasons for PlayStation Home’s failure, I don’t think the lack of blockchain tech was anywhere near the top 10.

If Terra Virtua can get a host of amazing games together then it might find some success. Its CEO Gary Bracey says that the company hopes to have around 50 ready by the time the service launches in the latter half of this year, and if there are a couple of hot exclusives in there, then the company could have a shot.

But with Steam holding strong as the number one PC gaming store after more than a decade, and with Oculus being backed by the weight of Facebook, Terra Virtua is going to have a hefty fight on its hands if it wants to succeed.

What do you think VR needs to do to succeed? Let us know @TrustedReviews.