Legacy is a tricky beast and never more than when the primarily positive connotations of the word clash with its wholly negative interpretation within technology. Look at the perceived lack of innovation at Apple since Steve Jobs’ passing in October 2011. Steve would never have allowed this! is the common cry, but a new report reveals not only that he did, but that he was behind it…

Cooking Time
The news comes via US District Attorney George Gascón who reported recently on his discussions with Apple government liaison, Michael Foulkes. Gascón has been looking at ways to reduce phone crime and became frustrated when Foulkes told him little could be done in the near future because the next two generations of iPhone have already been developed. “They preceded Tim Cook,” Gascón quotes Foulkes as saying. 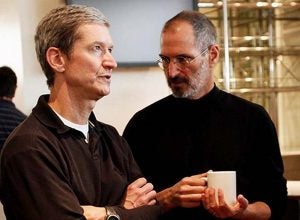 2014’s iPhone already developed prior to 2011? This shouldn’t be a surprise, tech road maps are years in the making. When an (linkout:https://www.trustedreviews.com/apple-itv-what-you-need-to-know_round-up Apple television) eventually appears, Jobs’s hands will also be all over it.

After all, his biographer Walter Isaacson already quoted him on the subject proclaiming, “I finally cracked it!” Good, bad or indifferent, Jobs will have allowed it and the same will be true of the rumoured Apple smartwatch. Legacies don’t switch on and off like light bulbs, yet Jobs will be credited for Apple’s future success and made blame free for its failures. Siri? Apple Maps? Both developed on Jobs’s watch by his golden boy, the recently fired Scott Forstall.

Black(and Blue)Berry
A similar affect can be seen at BlackBerry. In this case the resignation of co-founder Mike Lazaridis (below, right) last week was met with cheers akin to the ones that greeted news fellow co-founder Jim Balsillie (below, left) had sold his remaining shares last month after resigning in 2012.

The “anti-Jobs”, the duo was seen as responsible for the stagnation at BlackBerry as they failed to adapt to the threat of touchscreen phones and touch optimised software interfaces. Again the true legacy is somewhat different: both were heavily involved in BlackBerry 10, the company’s innovative comeback platform, which launched to largely positive reviews last month. 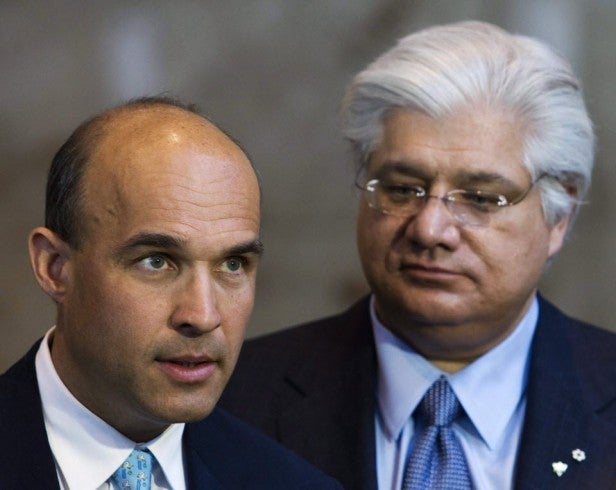 Speaking of Lazaridis’s resignation, current CEO Thorsten Heins – who has been credited as the progressive leader to turn things around – said: “I admire Mike for his many achievements and for his vision in helping bring BlackBerry 10 to fruition.”

In the Information Age where too much information has seen attention spans drop and viewpoints more easily formed around the certainties of black and white a key message has been forgotten: change takes time. Like BlackBerry, Microsoft was also lambasted for its inability to adapt to the new threats of iOS and Android.

The truth is both companies were weighed down by legacy while Apple and Google were both newcomers without this burden. Now BlackBerry and Microsoft are repositioned around BlackBerry 10 and Windows Phone respectively Apple is getting the cat calls… because iOS has built “legacy”.

Jelly Has-Bean
‘What about Google?’ I hear you cry. Without the burden of being tightly tied to a specific line of handsets it is true Android has so far managed to keep innovating at a tremendous pace, but its biggest problem remains legacy. Fragmentation is the most high profile aspect of this with Apple’s Phil Schiller recently mocking: “Over 50 per cent [of Android users] are still on software that is two years old”. He has a point, even if it could be argued iOS has hardly changed itself in the last two years. 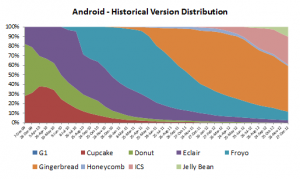 In response, Google updated its SDK in January to include the clause: “You agree that you will not take any actions that may cause or result in the fragmentation of Android,” but the effects of this will take time. Likewise, despite rumours of the fabled X Phone, the 20 months since Google purchased Motorola have yet to yield a single Nexus branded Motorola phone. For a company famous for making severe changes at a moment’s notice it again proves size comes with considerable drawbacks…

Out with the Old
…and this is brilliant. Why? Because in turning like oil tankers these mega-corporates give start-ups the window of opportunity to thrive. Spotify, Twitter, Facebook, Netflix and Dropbox are just some of the companies that were able to jump in, set up and establish themselves in market segments where all the major players are known to have vested long term interest.

Had Apple, Google and Microsoft been able to move as nimbly as a start up none would have got to market. Now as these start ups are themselves becoming established Bloom.fm (below), Instagram, Pinterest and JustCloud are finding the gaps they are slow to exploit.

As such legacy remains both infuriating and brilliant. It is generalised to create unrealistic heroes and villains, delays evolution and is nemesis of revolution. But legacy is also technology’s greatest cleanser bringing down the companies overwhelmed by it, handicapping the most powerful corporations trying to embrace it, and opening the market to ambitious newcomers without it. Wherever legacy exists it is inspiring someone to change it.