What size tablet should I buy?

Tablets are, with one or two exceptions, smaller and lighter than laptops, which is why they’re so
popular. They predominantly come in three screen sizes: 7-inch, around 8-inch or
10-inch. Each has its own strengths and weaknesses, and fundamentally
changes the way you use your tablet.

To help you choose, think about the following things:

1. How often will the tablet leave the house?
Will you use it mostly at home on the sofa or in bed, or do you plan to take it everywhere and use it when commuting?

2. What’s the primary thing you want to do?
Each size is good for the basics like web browsing. It’s when you think
about other tasks, such as reading, videos and playing games, that the
differences are more pronounced.

3. How much are you willing to spend?
The
bigger the tablet, the more expensive it’ll be. If you only have a
little to spend, you may have to go for a smaller, 7-inch tablet. 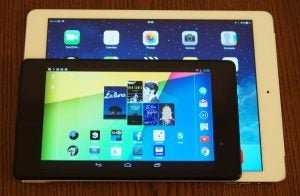 A 7-inch tablet compared to a 10-inch one

Most
of the 7-inch tablets available run Android. There are
some smaller Windows tablets, but they’re relatively new and not all of
them are on sale yet.

The advantages of 7-inch tablets are
primarily their portability. They’re much lighter than bigger-screened tablets,
but still come with great displays, plenty of storage and fast
processors. They’re also cheap – you can get a decent 7-inch tablet for
around £120, but they do go up to £600 for a fully kitted-out iPad mini 3.

7-inch tablets are great for using on the go, whether on a
commute or holidaying on a sunny beach. The high-quality screens and
long battery life mean they can even substitute as eBook readers.
Because the screen is smaller, you may find it a little difficult to
navigate some websites, particularly if your eyesight isn’t 20/20.
They’re also not the best for watching movies or TV programs, again
because of the screen size, but also because the speakers tend to be
quite weak and tinny. Headphones solve that issue, though.

Finally
you’ll struggle to use a 7-inch tablet well for productivity – writing lengthy emails, editing spreadsheets and suchlike. While you
can get keyboard docks for some of them, the screen and keyboard size
means that they’re not comfortable for writing over long periods of time.

These have grown in popularity since the release of the 7.8-inch iPad mini a few years ago. There are now a number of good 8-inch Android tablets on the market, such as the Nvidia Shield Tablet or the 8.9-inch Nexus 9 and Kindle Fire HDX 8.9 (2014).

Some like the iPad mini and Nexus 9 opt for a squarer 4:3 aspect ratio for their screens, just like old CRT tellies used to have. We think this is a better shape for a tablet. It makes browsing the web and playing games a better experience, but you do end up getting bigger black bars at the top and bottom of the screen when you’re watching movies when compared to narrower tablets.

8-inch tablets cover a good middle ground. They’re better for browsing the web, reading ebooks and watching movies than a 7-inch tablet, yet they manage to retain much of their portability. The downside? They’re a fair bit more expensive than some of the best 7-inch Android tablets on the market.

10-inch
tablets are a fair bit heavier and more difficult to handle than 7-inch
ones, but are also more versatile in terms of productivity and enjoying
TV, online videos, newspapers and magazines.

The high-resolution 10-inch screens are great for watching movies, and the extra
space means that better speakers can be included. You can happily watch
programs on one with another person. Digital magazines come to life
on the bigger screen and you can view high-resolution image galleries in
all their glory, and interact with articles in exciting new ways.

Some
10-inch tablets also come with keyboard docks that make them a useful
writing and productivity tool. Great examples of these are the Windows-running Asus Transformer Book T100 and the Microsoft Surface Pro 3.
Apple doesn’t make a keyboard for the iPad Air 2, but there are many third-party
companies that do, which means you can make it work like a laptop, too.

What screen resolution is best? Does it matter?
The
screen resolution of the tablet makes a big difference to how clear it
is and really affects your experience. Any 7-inch tablet with a ‘Full
HD’ screen should be great, but some tablets are brighter and are less
reflective than others, which means they’re better suited to using outside on sunny days. It’s worth trying this out in the store by tilting
the screen towards the overhead lights.

10-inch tablets can have
much higher-resolution displays. The screens of the Nexus 9 and iPad
Air 2 are particularly strong and provide an excellent tablet experience
with razor-sharp text. The Air 2 has a fantastic anti-reflective layer that makes it better than any other tablet to use outdoors on sunny days.

By contrast, similarly priced laptops tend to have much lower-resolution displays that can look dull and grainy.

What is ‘screen ratio’ and what difference does it make?
Screen
ratio simply refers to the ‘shape’ of the screen. For example, most
modern TVs and laptops are 16:9 (aka widescreen), while old CRT TVs were
4:3.

Most Android tablets favour a 16:9 or 16:10 aspect ratio, so they’re quite tall and thin. This means the black bars
that appear when watching widescreen movies are minimised. On 7-inch
tablets this ratio makes tablets feel more like books when held in
portrait, so they’re more comfortable for reading. On 10-inch tablets,
however, this can lead to them feeling too tall and unwieldy, while it’s
not the ideal shape for web pages, newspapers and magazines

iPads (and recently some Android tablets) have a 4:3 aspect ratio.
The big black bars you may get when watching movies are offset by the
benefit of a squarer screen while browsing the Internet and using apps
or playing games. It’s a shape that works best for newspapers and
magazines, too.

Is it worth buying a tablet with 3G/4G?
Most
tablets come in two versions: one with Wi-Fi only and another with Wi-Fi and 4G and/or 3G. Wi-Fi-only means that you’ll need a Wi-Fi connection to use the Internet, whether at home or in a café.

4G tablets allow you to
insert a SIM card so that you can use a mobile network to have Internet
access wherever you can get a signal, just like you do with a mobile phone.

You’ll need a
subscription, though, again in the same way as your phone. 4G used to be pricey, but you can now get it for
£15 per month on EE for 2GB of data. That should be enough, unless
you often use your tablet to stream TV or movies on the move.

One thing we do keep hearing
from tablet owners is that they wish they’d bought one with mobile Internet rather than Wi-Fi only. If you commute you should really
consider a 3G or 4G tablet with a connection.

How much storage do I need?
If
you like to have a lot of music or movies on your tablet, you’ll need a
lot of storage. Storage is measured in gigabytes (GB). 32GB is ample
for most users, but some tablets come with the option of adding extra capacity via a microSD card. These are bought separately and are relatively cheap.

Only
some Android and Windows tablets come with a microSD slot – you don’t
get that option on iPads, so you’re stuck with what you chose initially. If you
get a tablet with only limited storage, say 8GB, check to make sure it
accepts microSD cards. If it doesn’t, don’t buy it.

How much do I need to spend and how can I save money? 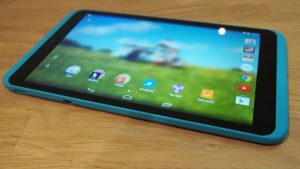 Finally,
one of the biggest things that will define which tablet you should buy
is your budget. Generally 7-inch tablets are much cheaper than 10-inch
ones and iPads are more expensive than Android tablets.

One thing you should be very wary of is ‘bargains’.
Beware the 7-inch tablet that sounds good on paper but costs only £80,
or the 10-inch one that costs £150. These are almost always poorly made
using cheap materials and provide a shockingly bad experience. A classic
example of this is the Argos MyTablet. Steer well clear.

One exception, however, is the
Tesco Hudl 2 tablet pictured above. It costs £129 as standard, but can be
bought for as little as £65 with Tesco Clubcard vouchers, which is frankly ludicrous. It’s a good tablet that’s well worth considering if you’re on a tight
budget.

Shoddy tablet makers usually don’t want their product reviewed, so make sure you check TrustedReviews’ tablet reviews if you want to know about a tablet we’ve not recommended in our list of best tablets. If we haven’t reviewed it, it’s likely not worth owning.

Now it’s time to find out which tablets you should look to buy this Christmas.