Surface Book vs Surface Pro 4: How do they compare?

Both have been getting good reviews – including from us – but how do these two Windows 10 hybrids compare to one another?

Let’s take a closer look and see if we can’t find out. 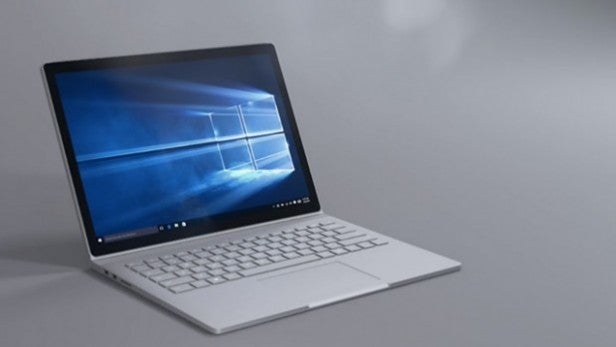 Ostensibly what we have here are two 2-in-1 Windows 10 devices, combining the best features of the tablet and laptop form factors. But beyond this superficial similarity the Surface Book and Surface Pro 4 represent two very different designs.

The Surface Pro 4 is a familiar super-sized tablet that forms a kind-of-laptop only by means of an optional keyboard-cover add-on.

The Surface Book, on the other hand, is a solid laptop first and foremost. It’s just that you can also remove that display from its solid keyboard base to form a digital clipboard (aka an even bigger tablet).

Both feature a sharp, angular metallic (magnesium) design language, but the Surface Book has the addition of a distinctive snake-like hinge that unfurls and flattens as you open it out. Both are striking bits of kit in their own way.

However, the Surface Book is much chunkier than the Surface Pro 4. Even with the optional Type Cover added, the Pro 4 is almost 50% lighter.

Related: Microsoft Surface Book: 5 Features that will make you want one 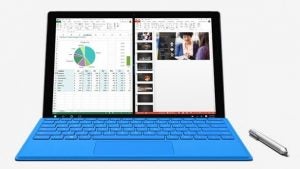 The Surface Book has the bigger display of the two devices by 1.2-inches. However, it also has a slightly higher resolution of 3,000 x 2,000.

As a result of this, the two screens boast an identical pixel density of 267ppi. That’s extremely sharp for a device of this form factor.

By way of a comparison, the 15-inch MacBook Pro Retina’s screen – one of the first and most popular in this class of super-sharp portables – produces 220ppi.

Essentially, Microsoft has produced two of the crispest screens on the market.

When it comes to colour temperature, both displays get pretty close to the 6,500K ideal. What’s interesting is that they come down either side of that figure.

The Surface Pro 4 scored a slightly warm 6,946K, while the Surface Book came in with an ever so slightly cool – but generally pretty great – 6,377K.

As for colour accuracy, the Surface Pro 4 is technically inferior again, with a Delta E score of 0.67 next to the Surface Book’s 0.19. However, any score below 1 is pretty much imperceptible to the human eye, so both are great in this respect. 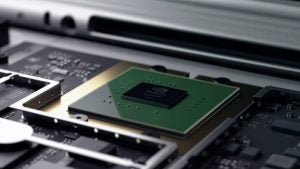 Both Surface hybrids are powered by a choice of sixth generation Intel processors, though the Surface Pro 4 starts at a lowlier m3 option.

At the other end of the scale, the Surface Book pairs its top i7 CPU with a custom discrete Nvidia GeForce GPU that’s been tweaked and optimised by the Xbox team. The Pro simply doesn’t have this luxury.

Our 3DMark FireStrike benchmark tests suggest that, when docked, the top-specced Surface Book is more than twice as fast as the equivalent Surface Pro 4 – a clear result of that bespoke GeForce GPU.

Both devices come with a choice of 8GB or 16GB of RAM, but the smaller device also features an entry-level 4GB option. Basically, there’s plenty of power on tap for both hybrid devices, but the Surface Book has the edge. 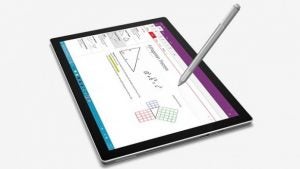 The way these two devices approach the matter of keyboards is arguably their defining difference.

As mentioned, the Surface Pro 4’s keyboard is optional, and the device doesn’t ship with one as standard. You have a choice of a larger Type Cover keyboard or a lighter Touch Cover.

The Type Cover is the one that Microsoft was keen to show off at its launch event, and it’s been much improved over previous versions. The keys have been better spaced out than before, and they have a new butterfly scissor mechanism that offers a more solid feel, rather like the new MacBook.

Also, the Type Cover’s touchpad has been much improved. It’s bigger, and it’s now covered by glass for a smoother experience.

Meanwhile the Surface Book comes with a more traditional keyboard as standard. We say traditional, but the magnetised connection and ‘snake’ hinge system is anything but standard, effectively making this hybrid act like a proper laptop.

Interestingly, this keyboard also houses the aforementioned Nvidia GPU in the top specification, as well as a bunch of batteries. It’s much more than just an accessory.

These are both Surface devices, which means that they both come with the latest Surface Pen as standard.

This latest Microsoft stylus boasts 1,024 levels of pressure sensitivity for its fine (and interchangeable) tip, while the opposite end acts as an eraser. This eraser also doubles as a shortcut to Microsoft’s Cortana personal assistant. 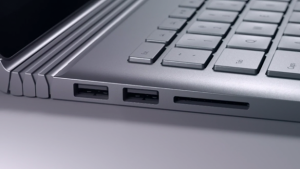 These are two well-connected devices for their size, but the larger Surface Book is understandably the better connected of the two.

Both have Mini DisplayPort connections too, as well as the usual array of Wi-Fi and Bluetooth 4.0 options. 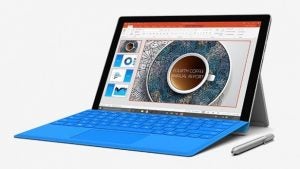 Rather impressively, both Surface devices have identical storage options – and neither is found wanting.

These start from 128GB as the bare minimum and go right up to 1TB solid state drives. Plenty of storage whatever you choose.

Both devices offer a wide range of spec options, resulting in a difference of around £1,000 between the entry and top models of each.

However, while the Surface Pro 4 offers something for a range of budgets, the Surface Book is either expensive or really expensive.

It starts for a not inconsiderable £1,299, and that’s for the i5 model with no dedicated GPU – one of the big selling points for this machine. If you want the GeForce GPU (which you do), then pricing starts from £1,599. The top model, meanwhile, costs an eye-watering £2,249.


While it’s true that the Surface Pro 4 has its own hamstrung entry-level model in the £749 Intel Core m3 tier, we can see how this would still be a genuinely useful and appealing option for many. Even then, £100 extra will get you a ‘proper’ i5 CPU.

Of course, the top Surface Pro 4 costs a stiff £1,799, and you need to factor in the cost of a Type Cover on top of the base cost, but it generally seems like better value than the Surface Book. 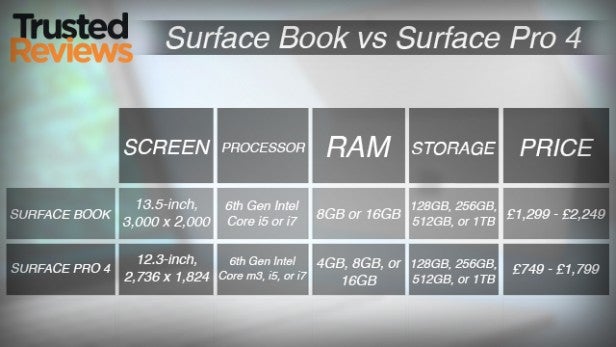 At first glance, it was tempting to speculate that Microsoft had trodden on its own toes with the launch of the Surface Book alongside the Surface Pro 4. But really, the two devices fill two subtly different needs.

The Surface Pro 4 is the latest refinement of a form factor Microsoft has come to define – a tablet with the power of a laptop, which can be lugged around like an iPad, but which is capable of far greater productivity when the need arises.

However, the Surface range has never been more than adequate as a laptop. It’s never been something you could conceivably (or at least comfortably) use as a daily, all-day work device. The Surface Book is just that, with its ingenious full keyboard design, slightly larger display, and discrete GPU option.

Still, there’s one stand-out factor that swings things in the Surface Pro 4’s favour overall – price. The Surface Book costs an awful lot of money, particularly when it comes to securing that model with the difference-making dedicated GPU. Put simply, you can get a competitive laptop for an awful lot less.

Conversely, the Surface Pro 4 is a compelling package with a more reasonable range of price points. There’s no other hybrid that offers quite the same quality experience at this price, let alone for less money.