A few helpful hints to help you get started

We were suitably impressed with Sunset Overdrive, but you’ll need to remember it isn’t quite like any other game of its kind in terms of gameplay.

To help you get to grips with Sunset Overdrive initially, we’ve outlined some tips that you should really bare in mind when starting to play.

For our full verdict on the Insomniac game, head to our full Sunset Overdrive review, but before you press start, take a gander at these tips:

1) Get off the ground

Sunset Overdrive blends elements from games like Jet Set Radio with Insomniac’s take on a third-person shooter. In that way, the idea is to stay off the ground.

If you try and stay still, or even use the usual tactics of strafe, dodge and shoot, you’ll still be overrun by OD fairly swiftly. You’ll die a lot in the first part of the game unless you take advantage of Sunset City’s bouncepads, which take the form of cars, grate and other unusually bouncy surfaces, as well as the myriad grinding surfaces to keep moving while you take down those OD.

So, in short keep moving and stay off the ground as much as possible. Basically, grind or die. 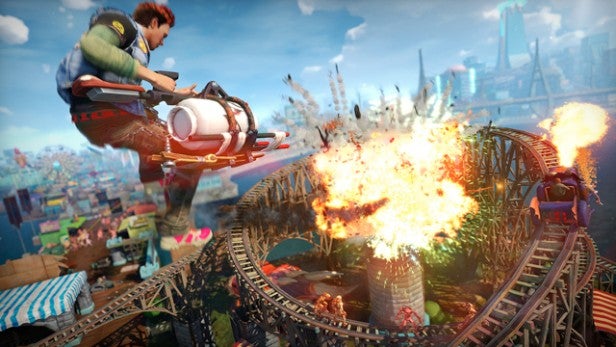 2) Take the fight to the enemy

You can’t really be afraid of the enemy. In Sunset Overdrive, so long as you keep moving you should be going at them and past them. Then you can flick back around to come back and hit them some more.

Don’t be a pansy. This isn’t Alien Isolation where hiding is rewarded. Instead hunt down the OD packs and take them out. Every kill you make will see you rewarded with style points and more, so get shooting.

There’s a paradigm shift moment with Sunset Overdrive. We’ve all had it. You start playing the game and think you’ll never be able to master the control system, moving rapidly around the world while still be able to take out OD with a single, well-placed headshot.

But then about 15-20 minutes in, it clicks and you get it. It might take some of you a little longer – it did with me – but once you’ve mastered it, the satisfaction is bliss.

You won’t have played a shooter with movement like this, so it’s a little tricky at first. But, Insomniac has spent a lot of time on the early part of the game allowing you get to grips with the controls in bite sized chunks. Don’t panic – you’ll be leaping, ziplining and shooting bad guys seamlessly in no time. 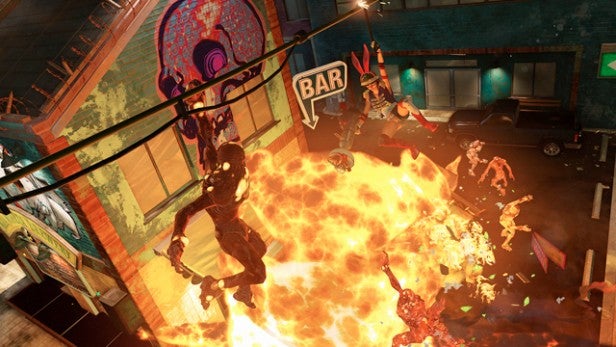 4) Use traversal to your advantage

Not only will you have to master the way you move around Sunset City, but you’ll also need to learn how to use traversal to your advantage. You should always be plotting your next traversal move out, preparing to switch weapons depending on the enemy type you’re about to encounter. It’s key to becoming a truly proficient player and will aid you a lot when it comes to multiplayer.

In order to make the most of the traversal routes, remember that tapping RB on a grind rail gives you a boost. Plus, later on, that button will also let you dash through the air a little. Left trigger lets you slow down on grind rails, to not only give you a little more time to aim but also time to look for your next traversal move.

Also, pressing A when touching down on a bouncepad, switching from under- to over-grind, or coming out of a dodge roll will let you leap into the air, making it easier to connect your traversal points seamlessly and elegantly.

Up in the right hand corner of your screen you’ll find your character’s Style Meter. It’ll fill up the more enemy deaths you chain together and you’ll also get Style points for your expert traversal manoeuvres. When you start to charge up your Style meter by doing awesome combos and grinding moves, you’ll notice that it has three levels.

The first level lets you apply Amps – or awesome bonus moves that will help you take down OD in bigger numbers and with far more style – to your character, whether that’s aiding traversal, melee combat or other cool perks. The Style Meter’s second level allows you to use your weapon Amps, which is really where the fun starts and allows you to really customise your weapons.

The third level though, will bring your Epic Amps into play and will make you quite the formidable foe. So watch that Style Meter like a hawk – and being on the ground will make it go down really really fast too. 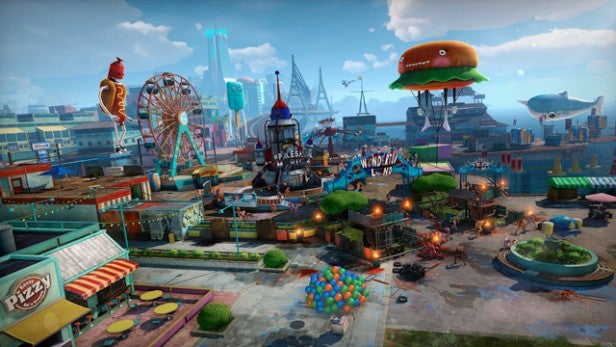 Sunset Overdrive is jam packed full of collectibles. Some people may think going around an picking them all up is just for the completionist gamers, but in Sunset Overdrive it’s a bit different.

There’s smartphones for back story on the game’s various characters, but more importantly you’ll want to watch out for Fizzco balloons, randomly strung up toilet paper, shoes or Overcharge signs. Collecting these are crucial to the game as you can trade them in for better Amps – and therefore an overall more entertaining game.

7) It’s all about strategy

Once you’ve got it down and get into the deeper part of the game, you’ll realise Sunset Overdrive is a tactical playground. It might look cartoony and juvenile, but there’s so many layers to the combat and your arsenal that it requires some strategy.

You’ll need to think not only about your weapon, but also which amps you want to slot on your weapon. When your Style Meter rises to that second level, you might want to switch to a different weapon because of its amp abilities at that stage.