If you want to get the most out of Spotify, follow our tips and tricks for full mastery of the premiere music streaming service.

Are you a regular Spotify user? Let’s face it, you probably know the basics well enough. But there plenty of hidden and not-so-hidden extras, app tie-ins, and shortcuts that can make using the service a lot better.

From skipping songs with the tap of a keyboard and filling gaps in the streaming library to beaming songs over to your PS4, this is our guide to becoming a Spotify pro. 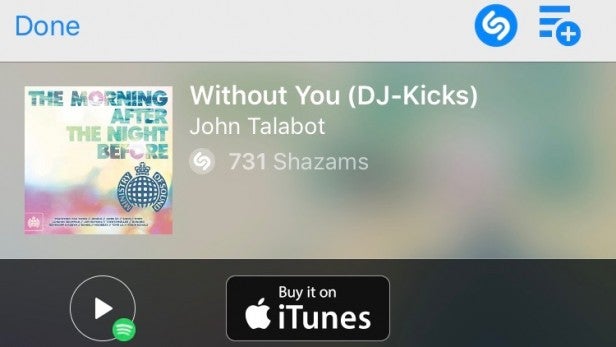 You can tie your Spotify account in to your Shazam app on iOS or Android. This means that when you discover a song through the clever ‘name that tune’ app, you’ll get a Spotify play icon immediately below the result. Press this and you’ll jump straight to the track without leaving Shazam. To tie your Spotify account in, go to My Shazam and hit the settings cog icon. Hit the Connect to Spotify option and follow the instructions.

It’s easy-peasy to share the tracks you love from the Spotify desktop app. Just drag and drop the song title into any text field, and a handy link will automatically be created. 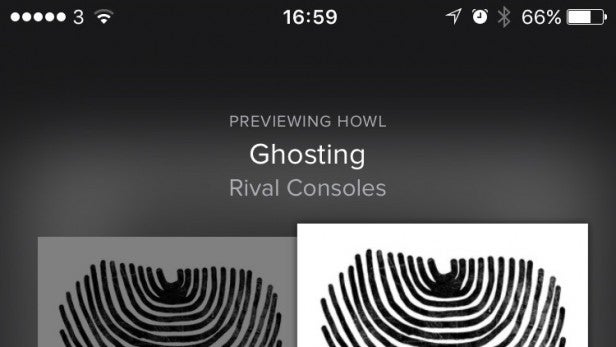 Do you use Spotify on your iPhone? Then you should be taking advantage of the great Touch Preview feature. When you spot an interesting new release, tap and hold on the artwork, and the tracks will open out into a grid. Keep pressing and hover over each track to play an instant audio snippet.

Spotify has a massive library packed with over 30 million tunes. But while that sounds like it might cover all the bases, sometimes it doesn’t. Whether you have very specific tastes, a bunch of old mixtapes or a love for The Beatles, you might be disappointed when you start eagerly searching away. There are plenty of holes in Spotify’s – and all other music streaming services’ – libraries, but the Swedish company makes it fairly easy to plug them. At least, if you have the music already downloaded from somewhere else. 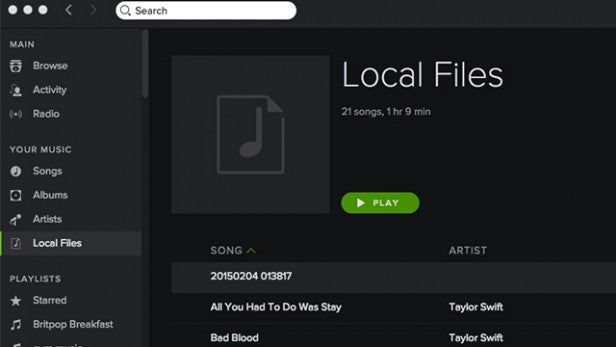 In the Spotify desktop app there’s a section called ‘Local Files’, where you can drag and drop extra music and even sync it to your phone. You can then add it to playlists, the Your Music section and so on. It’s not quite the connected experience we’re hoping for with Apple Music, but it definitely helps fill some of the more glaring gaps in Spotify’s massive library (*cough* Taylor Swift *cough*).

Spotify Connect is pretty awesome – think Apple’s AirPlay or Google Cast for Audio – and it makes beaming tunes from one enabled device to another as simple as tapping the green button. What sets Spotify Connect out from the pack, though, is that it’s a feature that’s been added to a couple of older devices. Notably, the PS4 and Amazon’s Fire TV.

SEE ALSO: What is PlayStation Music? 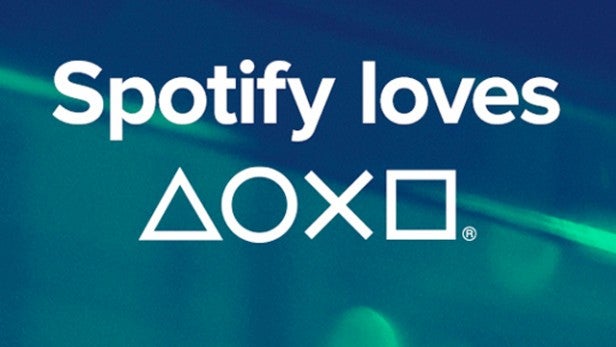 Sony’s interpretation is great and works through the new PlayStation Music app. Open the app up on your console, Spotify on your phone and they’ll link together. Your phone acts as a remote, letting you skip tracks while you’re playing games. It works similarly on the Fire TV, so you can use your television speakers to play some tunes.

Spotify playlist spring-cleaning is a regular occurrence in our lives. Sometimes 10 gym-themed lists is just to much. Thankfully, it’s pretty easy to recover these if you wake up in a cold sweat one night after having a change of heart about canning that selection of the finest ’80s synth ballads. Just head to Spotify.com, log into your account and hit ‘Recover playlists on the side bar’. Select the one you want to bring back from the dead and you need worry no more.

Play only the ‘best’ bit of a song

For those times when you just don’t have enough time spare to listen to a whole song, this handy tool will skip you forward to the most dramatic verse and cut out all the filler. Once you’ve searched for a song, ‘Where is the Drama?’ will think for a moment and then throw up the most dramatic part of the tune. 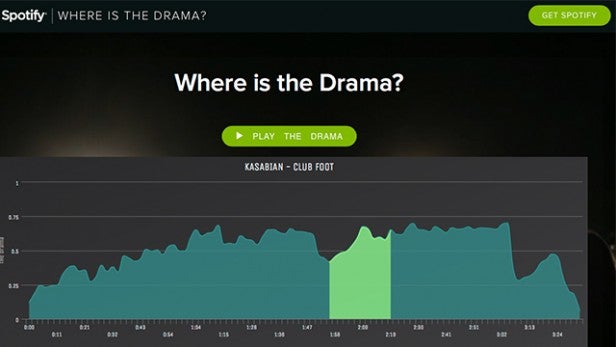 We fed in Kasabian’s Club Foot and apparently you only need to listen to it from 1.58 to 2.19 to get the full effect. Pretty much just the bit used for the Sky Sports footie advert, unsurprisingly.

Another nifty web app here, but this time coming officially from Spotify itself. Taste Rewind takes three artists from today – we chose A$AP Rocky, Kanye West plus Years and Years – and then it works out what you’d be listening to if you were transported back in time to another decade. It gave us results for the ’00s, ’90s, ’80s, ’70s and ’60s, with everything from Mos Def, Imogen Heap, Jay Z and Stevie Wonder making an appearance. It’s clearly some fairly simple algorithm that matches genres, but it’s presented in a typically slick manner. You can even play the songs directly from the site, which is a nice touch. 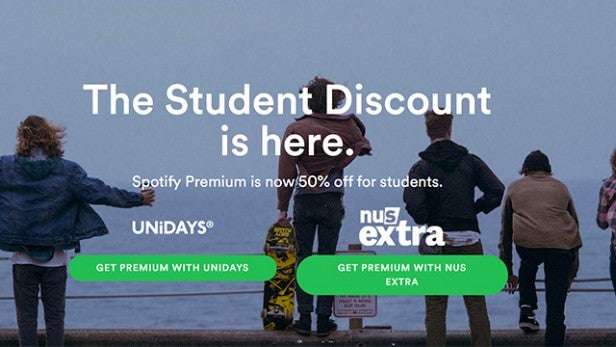 While £9.99 a month for basically all the music you could wish for is a pretty good deal in anyone’s book, it can be had for even less. If you’re a student, that is. Spotify currently offers 50% off the Premium plan if you’ve got an NUS Extra card or UniDays account. Can’t say fairer than that.

Spotify has dramatically improved its playlist creation service recently, churning out mountains of specialised lists covering pretty much all types of music. But if you’re not a fan of ‘Midday Folk Mix’ or ‘The Lunch Hour Shuffle’ there’s another service that you could try. Playlists.net lets you search Genres (blues, comedy, disco, dance etc) or by Moods (angry, dark or dramatic) and then it’ll bring up all the matching playlists, and there’s lots of them. The site really is packed with lists that cover just about everything you’d want to listen to, and they’re updated and maintained constantly. You can also upload your own, if you’re particularly proud of a certain piece of curation.

In our Netflix tips and tricks round-up we delved into some of the shortcuts that would help you master the service, but it turns out Spotify has some keyboard wizardry up its sleeve as well. Some of it’s fairly obvious – tapping the space bar will play/pause your tune – while a couple probably won’t ever get used, such as pressing Cmd+Shift+W to quickly log you out. Here’s the full list:

Even though we like to make out that all out the music we listen to is super cool and with the times, the truth is that it isn’t. Some mornings just call for a blast of Take That’s greatest hits or something from Carly Rae Jepsen. (Really… What?) But obviously we don’t want this to ruin our ‘reputation’. That’s where the private listening mode comes in. 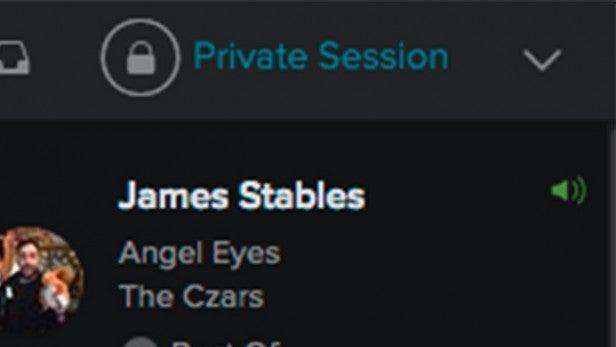 You can start a Private Listening session from the ‘File’ menu at the top and, once it’s initiated, nothing you play will be remembered, shared or shown on your feed.

Have we missed out your favourite Spotify tip or trick? Let us know in the comments below.