Be prepared for the ink war

Nintendo’s infectiously colourful take on the online multiplayer shooter is almost with us, and to fully prepare you for duty we’ve compiled a list of handy Splatoon hints and indispensable tips so you’re fully prepared when the ink begins to fly on May 29th.

If you’re still not sure if you’ll be making a purchase, the Splatoon Global Testfire demo is open for another one-hour session on Saturday 23rd May at 11pm UK time, so be sure to brush up on these pieces of sagely advice before playing – your resultant success might just tip you over the edge into laying down your hard-earned cash on launch day. 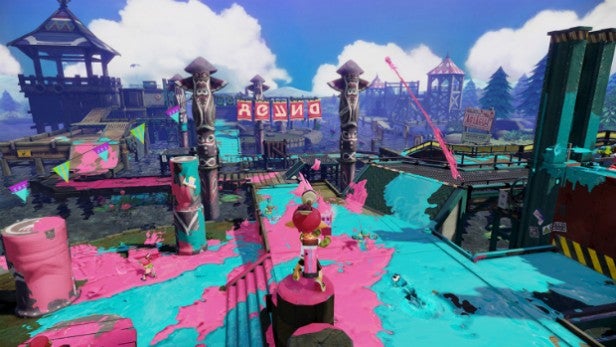 1) Keep your eyes on the prize

Taking out an enemy player in Splatoon is incredibly satisfying – they explode in a shower of ink which not only looks cool, but also causes a splash which covers some of the nearby ground with your team’s colour.

However, while taking out opponents is never going to get old, the objective of Splatoon isn’t to bag the most kills but to cover as much of the map as possible in the time limit. It doesn’t matter if you’ve got the aim of Dirty Harry and rack up a kill streak that Liam Neeson would be proud of – if your team hasn’t covered enough of the map, you’ve lost. Also keep in mind that it’s only surfaces which can be seen from directly above which count when the ink is tallied up at the end. That means that while it’s possible to apply ink to vertical surfaces, these won’t count towards your total. 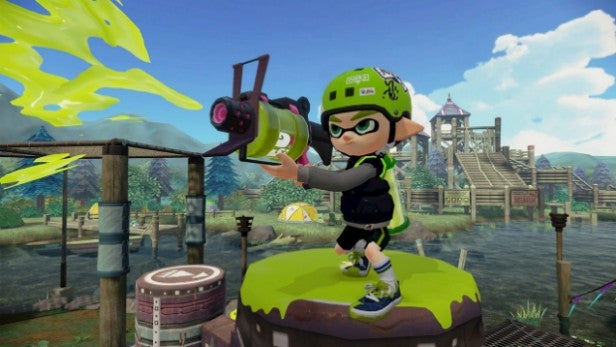 2) Pick the right control scheme for you

Splatoon’s default control method is pretty unique – it uses a twin-stick set-up which will be instantly familiar to any shooter fan, but injects an additional twist in the form of motion controls, which offer extra precision. Moving the Wii U GamePad adjusts your on-screen aim, giving the kind of accuracy you’d normally associate with a PC-based “mouse and keyboard” arrangement. When you’re using weapons which require pin-point aiming – like the Shooter or Charger class – then you’ll appreciate this extra degree of control, especially when using the sniper-like Charger guns.

However, the motion controls do take some getting used to. Because your eyes are fixed firmly on TV and not the GamePad display, it can feel a little awkward moving the pad while the main screen remains stationary. It also means you’re constantly having to move your upper body around, and this can prove to be tiring after prolonged periods.

Thankfully, Nintendo has also included a more traditional twin-stick configuration which, while not as precise, will provide a more comfortable option for shooter veterans. The key here is to experiment with both choices to see which one is right for you – but we would recommend sticking with the motion controls for as long as possible, as the extra accuracy they offer can mean the difference between success and failure. 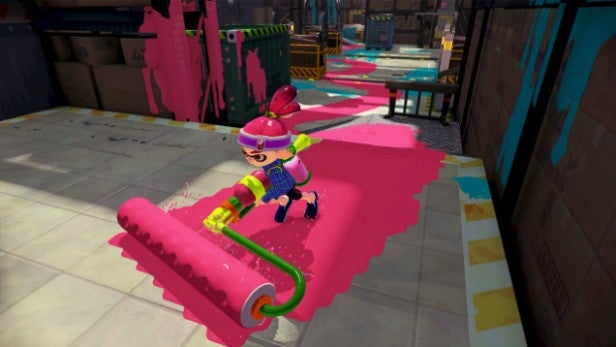 The best teams in Splatoon have players assuming a variety of roles. Those brandishing Shooter-type weapons are the foot soldiers, dealing with enemy attacks and inking as much of the map as possible at the same time.

Charger characters are less about covering ground and more about taking out distant threats – so they usually operate best from higher positions, or away from the front line.

Finally we have the Roller characters, who are purely there to cover the map in ink; while they can do short-range ink splats, in a one-on-one firefight with a Shooter, they usually come out worse.

Having a mixture of these three classes means your team can deal with a wide range of threats, but can also lay down as much ink as possible – and at the end of the day, that’s what wins the battle. Once you’ve picked a weapon type, make sure you adapt your play style to suit its strengths and weaknesses. 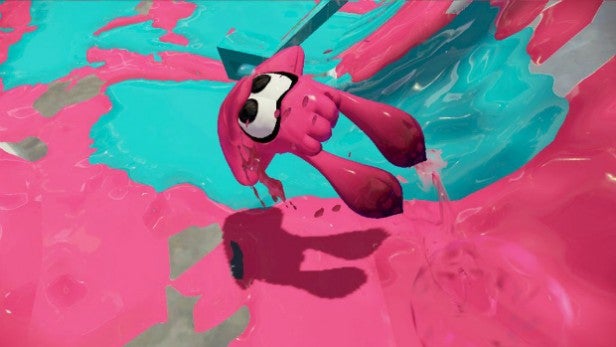 4) Stay in cover whenever possible

You move faster in squid form, so when you’re traversing through territory that has already been inked by your team, it’s rarely sensible to do it on foot. You’re an easy target when in human form, but as a squid you can move around the map undercover – provided you’re swimming in ink of your team’s colour.

It’s also important to stop and take in the current situation whenever possible. While Splatoon is fast-paced, sometimes pausing for a moment in squid form allows you to target incoming threats, note the flow of the battle and – if you’re really lucky – get the drop on a rival and surprise them with a few well-timed blasts. Just remember that when you’re swimming in the ink you’re still vulnerable to incoming enemy ink, which has a tendency to cover you quickly and with fatal results. Also keep in mind that if you do get stranded in the wrong colour ink, your mobility is drastically reduced. 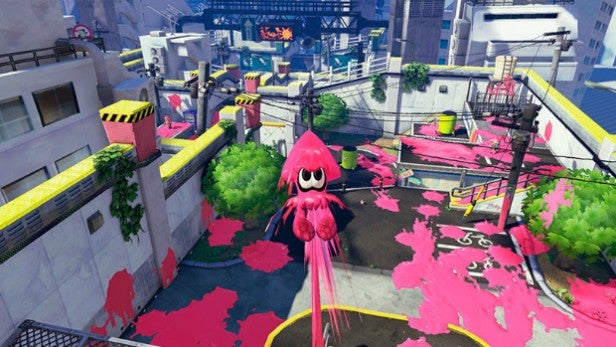 5) Get into the thick of things quickly

Getting splatted not only incurs a short moment of down-time, but also dumps you back at your team’s respawn point. Sometimes you might find this to be a benefit – especially if the opposition team has overrun your section of the map – but most of the time you’ll want to get back into the thick of things as quickly as possible. To do this you can tap a fellow teammate on the GamePad’s touch-screen and you will leap to that point of the map in mere seconds. This is a great idea when you want to keep the momentum of your attack going, so be sure to use it whenever possible. 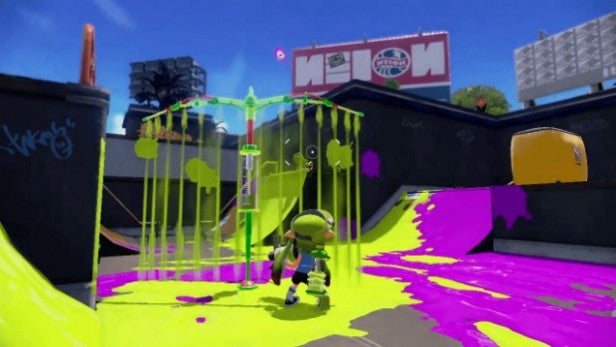 6) Use your sub and special weapons wisely

Splatoon’s sub-weapons vary depending on what main weapon you have, but all of them are useful in one way or another, and it’s worth experimenting with each to learn the various applications. Some of the Shooter weapons come with bombs which can be thrown ahead of you to cause damage and cover the ground with ink, while others – such as the Point Sensor – can reveal the locations of enemy players even when they’re hiding in ink. The Squid Beacon allows follow players to quick-jump to a certain location for a limited period of time, while the deadly Seeker is a ground-based homing device which tracks the nearest enemy and explodes on impact.

All of these items can and should be used during battle for maximum success, but be warned – they consume a large amount of your ink, and deploying one at the wrong time can leave your tank empty and your character open to retaliation. Then there’s the special weapons, which can only be used when you’ve charged up your special gauge – which is done by inking the landscape. These are more powerful than the sub-weapons, and can turn the tide of a battle almost instantly – take the Kraken for example, which allows you to turn into an invincible sea monster which moves quickly through enemy ink and can leap into the air, taking out rival players.

Each weapon in the game offers a different sub and special weapon, and some are so potent that it’s worth the additional effort of mastering the main weapon, even if it’s one you wouldn’t normally use. Again, experiment with each loadout to see which one suits your personal play style. 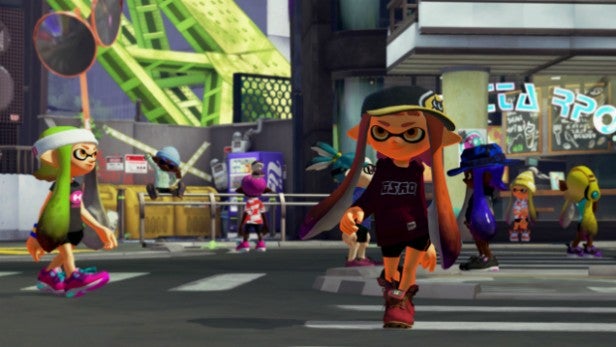 During battle you’ll earn gold which can be spent in the stores found in Inkopolis. Hats, shirts and shoes all have status effects which improve your chances during battle, such as making you ink last longer, reducing your respawn time or increasing your running or swimming speed. Gear can be upgraded with additional status effects following continued success in battle, so it pays to stick with the same outfit for prolonged periods of time. Always return to the shopping district to check out any new additions, and keep an eye on the various status effects you have in play at any one time – by swapping out a single item of gear, you could potentially make your character more effective in combat. 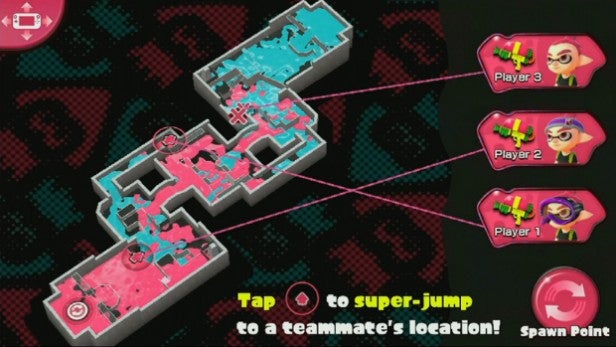 All of the maps in Splatoon come with sniping points, obstacles and other environmental features, and fully understanding them is key to success. There are sections of each map which provide the ideal vantage point for Charger users, allowing them to pick off targets at a distance without the fear of immediate retaliation. However, in these cases it’s important to not outstay your welcome – no spot of the map is entirely safe, and once the enemy spots where you are, there’s a good chance they will make a beeline for your location and take you out.

Each map has one or more “choke” points where the fighting is likely to be most fierce. Controlling these parts of the map is often the difference between winning and losing, especially on the thin maps which force both teams into a single choke point. It’s a good idea to charge towards these areas as soon as the match begins, and then use canny teamwork to maintain your grip.

Splatoon randomly swaps around the two available battle stages on a daily basis, which forces you to play them all and therefore learn all of their intricacies. Explore every corner and learn every shortcut, and you’ll be much better prepared when the ink starts flying.