The Sony Xperia Z5 Premium is the first 4K phone we’ve used. In pure resolution terms it’s like four iPhone 6S Plus displays stacked up against each other.

For
the pedants out there, it’s a 3840 x 2160 pixel display whose
recognised standard is actually called UHD, rather than 4K. It’s ‘ultra
high definition’, if you’re wondering what the U stands for.

The
question is: what is the Sony Xperia Z5 Premium’s ultra-high resolution
display good for? And is it worth valuing over the 3D Touch of the
iPhone 6S Plus or the curve of the Samsung Galaxy S6 Edge+?

What is the 4K screen good for?

Other
than that now-common QHD displays are already incredibly sharp, the
contentious part of the Sony Xperia Z5 Premium’s screen is what it
doesn’t display at 4K all the time. Most of the time it’s actually
1080p.

To get proper 4K resolution you need to watch 4K video or
look at high-resolution photos using the preinstalled Photos and Video
apps. I tried some sample 4K footage really designed to flaunt 4K TVs
with the Sony video app and, sure enough, it looks incredibly detailed.

It
also looked sharper than the same video played through MX Player, a
great free Android video player, which plays the footage back at 1080p.
Is it something you’d appreciate while watching the clip normally? A
little, if you try. 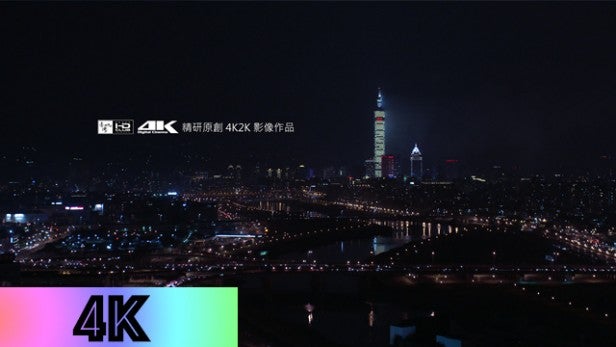 As
with 4K TVs, really well-recorded 4K footage played back on a screen
with high-enough contrast can make 2D content look almost 3D. There was a
bit more of that ‘3D’ sense at 4K than 1080p, although I can’t say
whether a QHD (the resolution of the Galaxy S6 Edge+ and LG G4) video
might have exactly the same effect. The Sony Xperia Z5 Premium never
uses that in-between resolution.

I’m also giving the Sony Xperia
Z5 Premium the best chance possible by using 4K test footage. This
stuff invariably features either intense macro-style nature shots or, in
this case, wide depth of field shots of cities, making the most of
every tiny window in every building.

Actual films tend to
emphasise detail much less, and use much narrower depth of field a lot
of the time. Especially if you’re not watching a Transformers-grade CGI
fest.  Also, the difference in sharpness was only clear on close
inspection. And it did seem more like ‘bonus sharpness’ than ‘bonus
detail’. 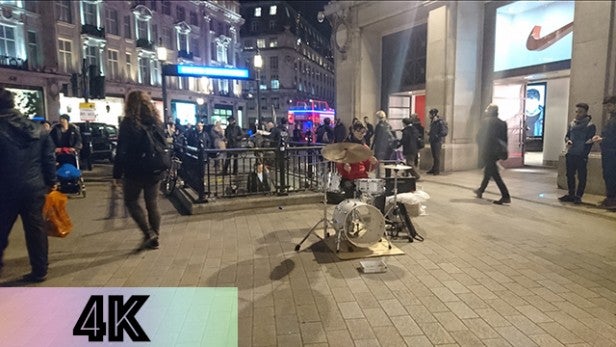 How close do you need to be to appreciate it?

I
actually tried this out, sitting at home where I normally watch films
to see how close I’d have to get the Sony Xperia Z5 Premium so that its
field of view was the same as my TV. It was around 20cm. Pretty damn
close, and far closer than I ever hold the phone when watching
something.

We have to hand it to Sony, though: it’s the only
phone that can actually make full use of 4K quality video right now. And
that is pretty cool.

Here’s where I
have to take a step back and assess what benefits it loses out on. The
first real shame is that there are no VR applications for the expanded
resolution. Not yet, anyway.

This is the one area where the bonus pixels would come in really handy. As of late 2015 in the pre-Oculus Rift, pre HTC Rift
age, every take on VR looks quite pixellated. Things like Samsung Gear
VR and the endless Google Cardboard headsets all use your phone’s
display, and are therefore limited to, max, 2560 x 1440 pixels. Even
that looks a bit blocky.

You may not be able to tell the
difference between QHD and UHD on a 5.5-inch screen at 30cm, but you
sure as heck will when the screen is blasted up to fill 90 per cent of
your field of view.

Related: What is 4K and UHD? 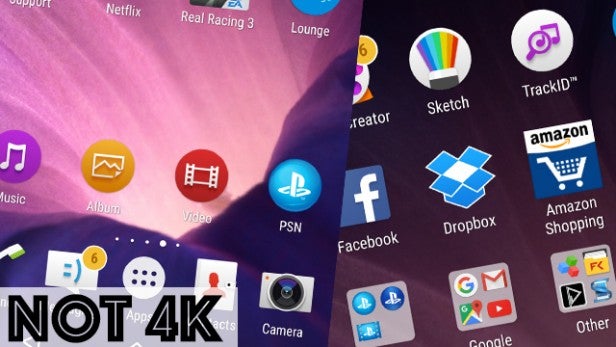 The
specific areas mentioned earlier: the Sony video and photo apps are the
only places where 4K is used. Everything else is rendered at 1080p “or
less”, according to a Sony rep I talked to. The “or less” part may get
you worrying, but it seems like pretty much everything that happens
while you’re actively using the phone is 1080p. Bar those few 4K bits.

What
this means is most of the places where you might initially head for 4K
video are blocked off. Netflix does not stream at 4K. Neither does
YouTube, even though it has absolutely loads of full-on 4K content you
can load on your probably-totally-not-4K laptop. 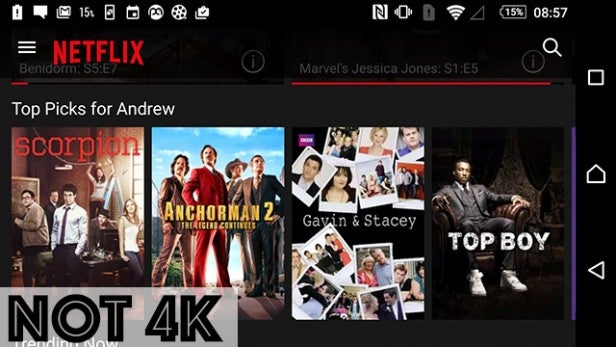 We
can’t really blame Sony for this. None of these services are geared to
deliver 4K content to mobile devices, and probably won’t be for an
awfully long time.

A reliable 4K steam over mobile internet?
Good luck with that one. Even when/if Netflix uses it for phones, in
most areas the reliability/speed of your mobile internet would probably
see Netflix’s clever adaptive video quality system slip back to a
lower-resolution feed.

Games aren’t 4K either. They’re (largely)
1080p once more, and current games just wouldn’t have the right assets
to render at 4K even if Android or the Sony Xperia Z5 Premium allowed
it. 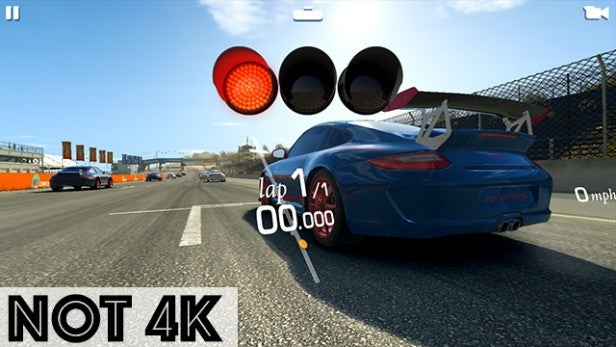 A look in the back room

Google’s
own developer blog tells you a lot about how most Android games/apps
are devised. Even though Android Marshmallow, the version that comes after the
Android 5 Lollipop used by the Premium right now, does support 4K screens, the
highest pixel density the ecosystem is really designed to cater for is around 640ppi.

This
is what Google calls an “extra-extra-extra-high-density” device, but
it’s still way off the 806ppi the Sony Xperia Z5 Premium delivers. It’s
“we’re gonna need a bigger boat” time.

Neither Android OS or app
ecosystem is prepared to deal with a 5.5-inch 4K screen. Simple as
that. So even if there were no issues with system-level support or
battery life, the interface of Android, apps and games would suffer from
loads of scaling issues. Buttons would likely look tiny, with other
visual elements really designed to be seen on a bigger display.

This
is why Sony shoehorns 4K in with its minimal third-party
implementation. It was really the only way for Sony to proceed without
making a borderline unusable phone. Sony claims battery life was the
issue, but there are loads of other important issues to consider too.

However,
there is another side to Sony 4K. It also upscales lower-resolution
content to suit the display. It has to, otherwise when the Sony Xperia
Z5 Premium shows the Android OS at 1080p, it’d only take up a quarter of
the screen.

The most basic kind of upscaling would involve
taking 1080p content and displaying four pixels for every one. As I
mentioned at the beginning of this article, the Premium is the
equivalent of four 1080p screens.

In order to make the claim of
turning things like Netflix into “near-4K” quality, what it needs to do
is to extrapolate the extra detail a 4K source might have by ‘making up’
the extra three pixels (per pixel) of information based on the
surrounding pixels we do have concrete information for when using a
1080p source.

So does it make Netflix 1080p look like 4K? No
more than the display sharpening on LG’s flagship phones does, to my
eyes. Once again, it’s very easy to overstate what Sony’s doing here.
After all, the QHD Samsung Galaxy S6 phones and the LG G4 up scale 1080p
content too, don’t they?

That’s a rhetorical question, by the way.

I
also found that the Sony Xperia Z5 Premium’s home screens look a tiny
bit soft compared with a QHD phone. This suggests that, here at least,
the upscaling may work by simply filling up spare pixels with in-between
colour shades rather than using them to increase the sharpness of
outlines and fine details with a more detail-oriented upscaling
algorithm.

Why are my screenshots only 1080p?

I did
try to have a closer look at what the Sony Xperia Z5 Premium is really
doing, to get a direct feed of screenshot renders 4K compared to 1080p.
However, Sony has a get out of jail free card.

Android 5.1
Lollipop can only actually output screenshots at 1080p. And I doubt
whether a system-level screenshot would show what the phone’s screen
‘brain’ is up to anyway.

I’ve had to rely on my eyes here, and I
find the impression of sharpness throughout the system is actually a
bit less than some QHD phones. The uses for it are pretty limited. Have a
giant store of 4K movies you want to play on a phone? You also need to
consider you’re limited to the codec support of the Sony Videos app,
which may not cover all the picks in your collection.

We’ll
probably see several more 4K phones over the next year or so. But the
Sony Xperia Z5 Premium doesn’t make the best case for them. Uses are
limited and it doesn’t explore the most obvious use for an intensely
high PPI screen, virtual reality. Not yet, anyway.