A closer look at the Xperia Z5 camera: Just how good is it?

Even DXOMark has pegged the Sony Xperia Z5 camera as the best among phones. But is it really? We’re going to take a much closer look at what the phone really offers on the photo front. 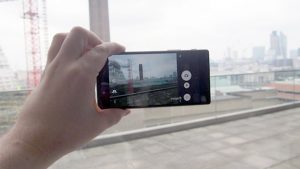 Sony makes most of the top phone camera sensors. These are the bits that actually harvest the light that streams through the lens, one of the most important elements of any camera.

The Sony Xperia Z5 has a sensor currently exclusive to it and the Z5 Compact, the IMX300. Sony is clearly out to give it an advantage over phones like the Moto X Style, which have kinda-similar 21-megapixel sensors.

That sounds great. And sure enough it is slightly larger than the 21-megapixel IMX230 sensor: it is 1/2.3-inch to the IMX230’s 1/2.4 inches. This lets it maintain 1.1 micron-size sensor pixels. These are the tiny little units that actually pick up the light that makes a camera’s images, and keeping them a decent size is the key to avoiding a camera having to raise ISO sensitivity (which increases noise) and having to use more intense noise reduction software. Sensor pixel size is also one of the lead elements of providing good dynamic range.

The one big issue is that the Sony Xperia Z5 doesn’t really want to take 23-megapixel images. It would rather take 8-megapixel images, the default size in all modes. You need to manually select 23-megapixel shooting, and it rules-out using certain modes.

Here’s how the phone’s detail compares to the Samsung Galaxy S6 and HTC One A9, both of which have lower-resolution cameras. 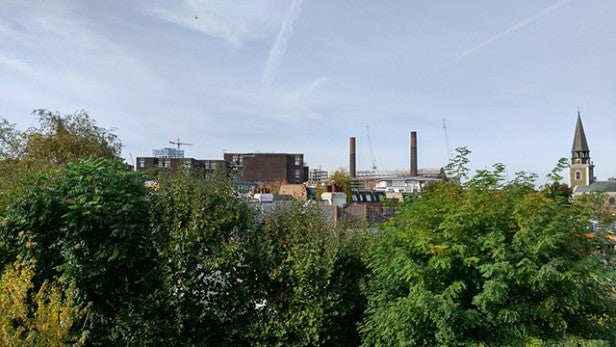 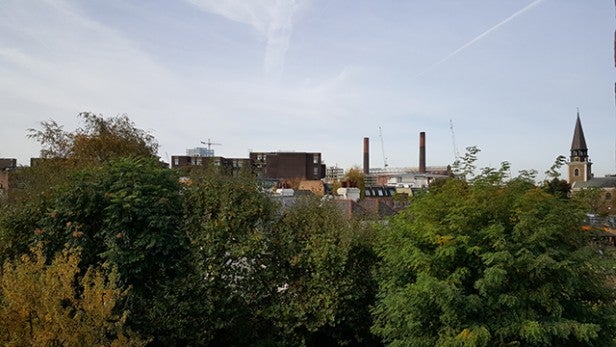 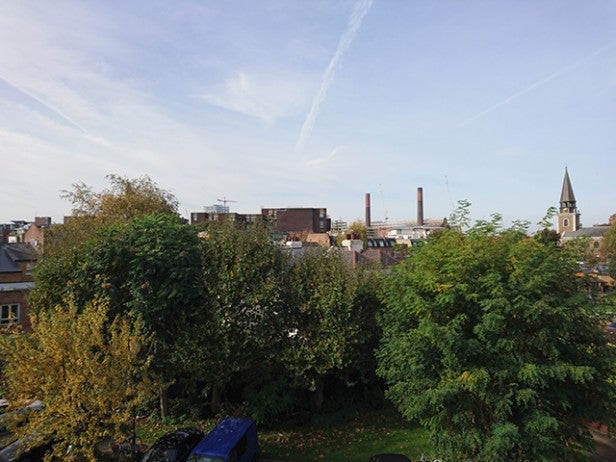 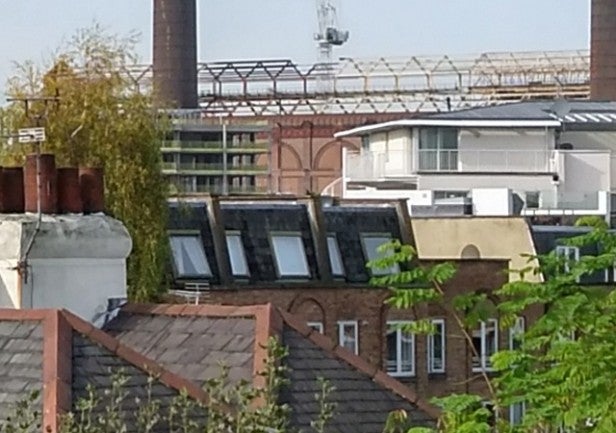 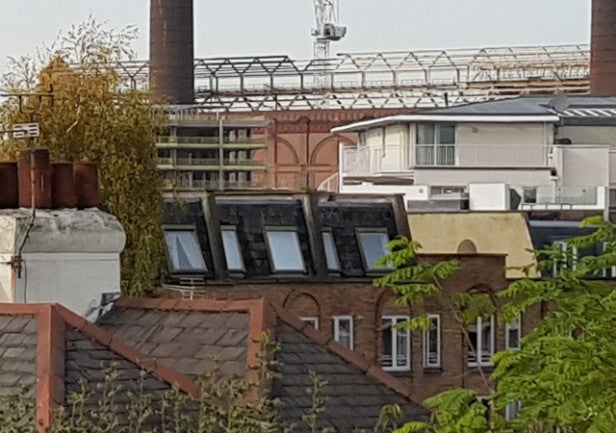 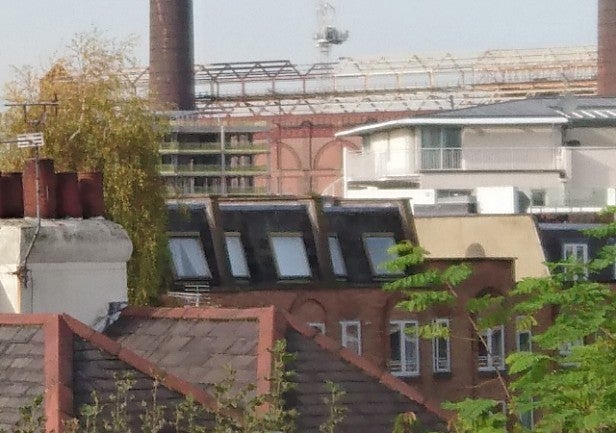 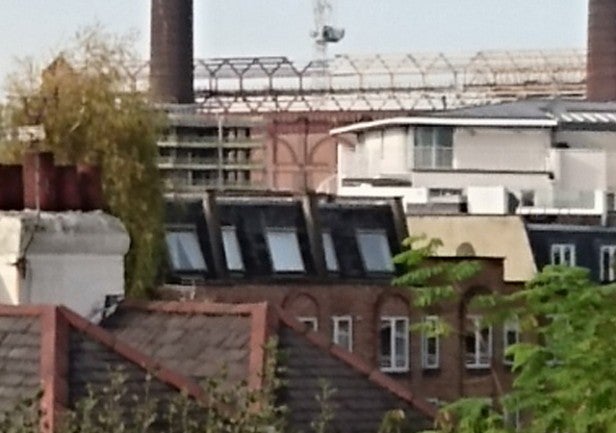 As you can see, the Sony Xperia Z5 can render a decent amount of fine detail. And we also need to consider that its 24mm lens gives you a more zoomed-out view than most phones. Is this a benefit? There’s no right or wrong when it comes to focal lengths, but I’d rather have something closer to 35mm.

Right down at pixel level, though, the Z5’s image is an awful lot fizzier than that of the Galaxy S6 or One A9. The issue is that this tends to completely destroy some fine details, particular in textures like the brickwork on a building. Just look at the house at the bottom of the zoomed-in images. In both Xperia Z5 shots it’s turned into mush where you can see bricks in the S6 and One A9 shots. The ultra-high resolution of the Z5 is ultimately a red herring.

How good is phase detection?

One other big feature of the IMX300 sensor is inbuilt phase detection. This is the kind of focusing used by DSLRs.

If a phone doesn’t have phase detection, and most don’t, they use something called contrast detection. All this does is to look at what the sensor sees and works through the AF range to work out when the image is sharpest, the point of greatest contrast in other words. Aside from needing a degree of contrast in the scene to work well, what slows down contrast detection is that it actually needs to go beyond the point of focus, then track back.

After all, while there’s always going to be a point at which the image is sharpest, the camera brain only knows it has reached that point when it has gone past it, because the image will start getting softer again.

Phase detection is different, using focusing pixels in front of or on the sensor at either end of the lens to work out whether an image is in-focus. This is rather more complicated-sounding than contrast detection, but looks at the trajectory of the incoming light to look at whether it’s heading in the right direction.

This lets it judge focus far more quickly because it doesn’t have to go back an forth like contrast detection. It makes the Xperia Z5 generally very quick at skipping from close-up focusing to locking onto the far-away background.

But now let’s get back down to earth. The Sony Xperia Z5 isn’t as fast as phase detection promises because there is a bit of shutter lag. This encompasses any delay between when you press the shutter button and the picture actually being taken. It’s not quite as fast as the Samsung Galaxy S6 and iPhone 6S.

The back-forward motion required in contrast detection is very obvious in low-light conditions.

How dark can you go?

Here’s where we come to the major shortfall of the Sony Xperia Z5: low-light shooting abilities. Unlike several rivals, the Z5 does not have true optical image stabilisation. You may have seen something called ‘SteadyShot’ in its feature list, but this is actually something quite different.

In this case at least, this means the Z5 has software video stabilisation, where the software cuts into the view of the camera, using the outer bits to buffer any juddery movements you might make. It’s no use for stills shooting.

For a demonstration of how this affects day-to-day shooting, here’s a comparison of the Z5, Galaxy S6 and HTC One A9 in low-light shooting. 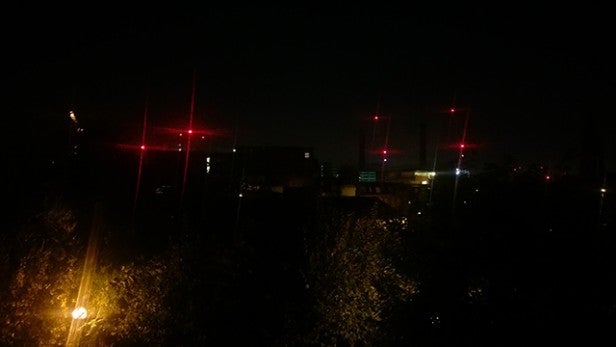 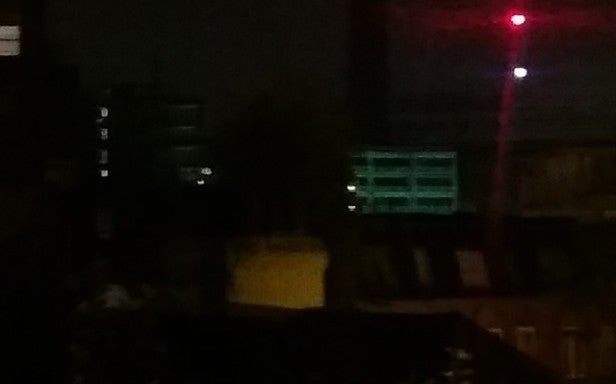 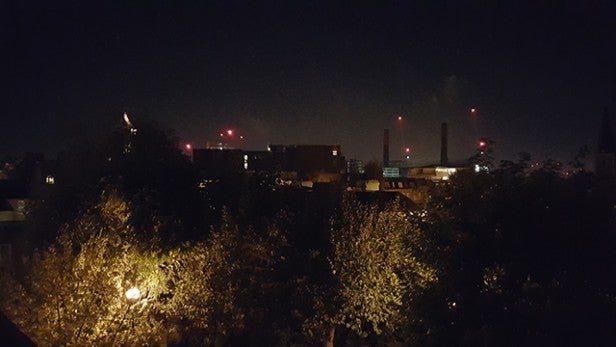 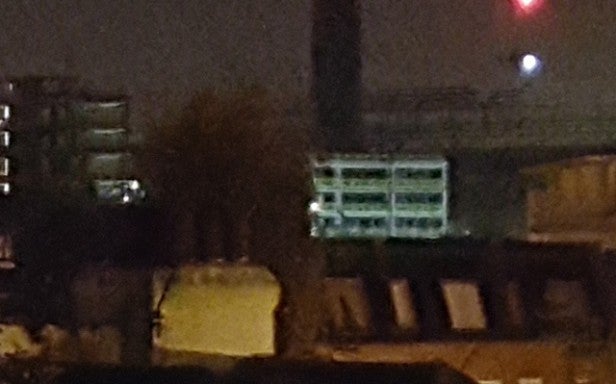 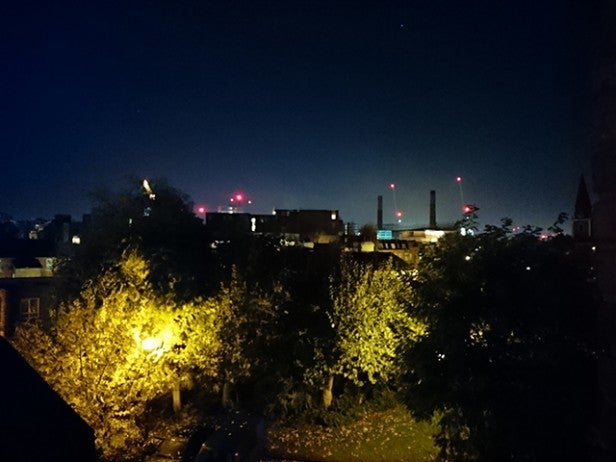 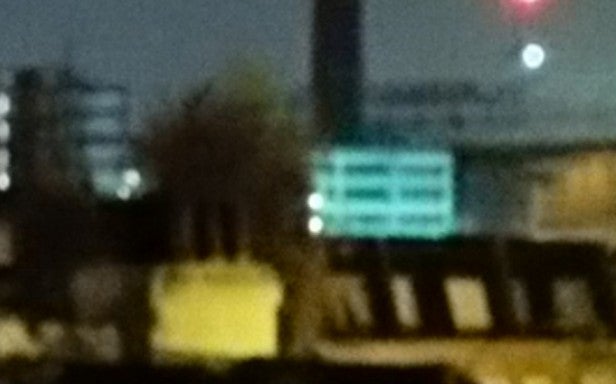 As you can see, while the Xperia Z5 retains far less detail than the others despite getting the scene to a good level of brightness. And this was the best result I got from about 20 exposures of the same scene. The Samsung Galaxy S6’s results were far, far more consistent and all were in-focus.

The Sony Xperia Z5’s actual boast for low-light shooting is something you’d ideally never want to use, ISO sensitivity that goes all the way up to 12800. It is raising sensitivity that causes noise in the first place, essentially giving the camera free rein to use less light to make a brighter image. That’s what results in all that noisy distortion.

It’s really just something to make the phone’s features list look better too, as the Xperia Z5 basically very rarely uses this high an ISO setting. The highest I got the ISO to go is 10000, shooting in a virtual light-free cupboard. Granted, this is a lot higher than the 2500 some phones seem to top out at.

One of the elements I have always found seriously impressive about the Xperia Z phones is how intense their low-light processing can be, though. They can make dark indoors scenes appear far brighter and clearer than they are to our eyes, by whacking up the ISO sensitivity and then using intense noise reduction to stop the image from looking horrible.

It’s this that the Sony Xperia Z5 is generally better at doing than any of its rivals. Still, the Samsung Galaxy S6 is still a far better low-light shooter.

What the Xperia Z5 also really excels at is providing extra modes you don’t get elsewhere, ones that use augmented reality to superimpose 3D objects onto your images. While it’s ultimately a bit of fun, it seems to be among the most taxing things the phone can do. I’m not joking either. The real-time processing required is a CPU-strainer.

The AR extras boil down to two modes. One has been around for ages now, and superimposes scenes onto the camera’s view of the world, keeping them in (roughly) the same spot even as you turn and move the phone.

One you might have seen demonstrated before is ‘Dinosaur’, which plonks a volcano and T-rex into your living room. There are now loads of extra scenes to download from Google Play too. It’s a sure-fire way to entertain young kids for a little while. 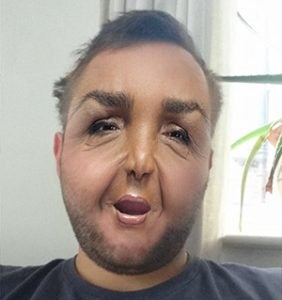 The newer side to the Sony Xperia Z5’s AR abilities is AR Mask. This one is far more amusing, using the selfie camera (although it can be used with the rear one too) to plaster a 3D mask over your face. This mask also has a mouth that opens and closes in time with yours. Masks that come pre-installed include a bunch of people, a cat and a gorilla. You can also take a picture of your own face and the phone will turn it into a 3D mask automatically. Very silly. Quite amusing.

For less of an intense AR tweak, there are also ‘Style Portraits’. These do things like to put digital makeup on you.

There’s so much stuff in the Sony Xperia Z5 camera app we couldn’t really cover it all in our main review. We’ve not even touched on the ‘standard’ creative effects yet, and they’re far more dynamic than what you get in most phone camera apps. Rather than laboriously listing them, here are some samples of what you can come up with. 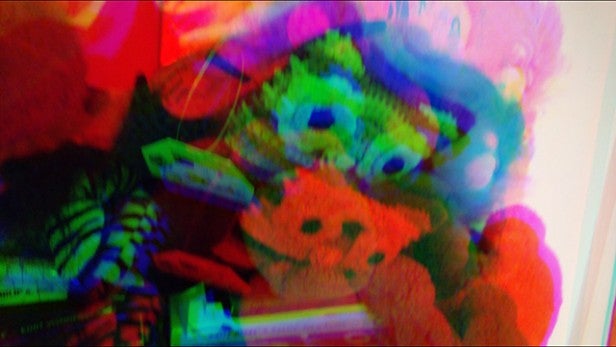 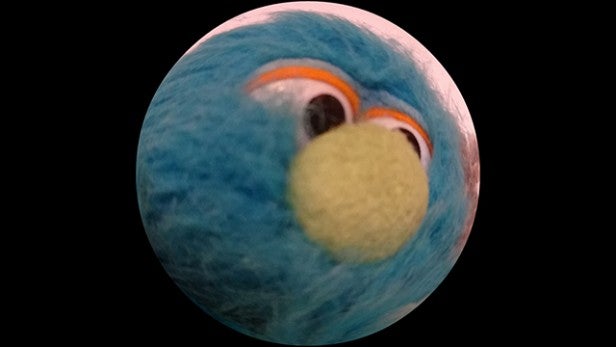 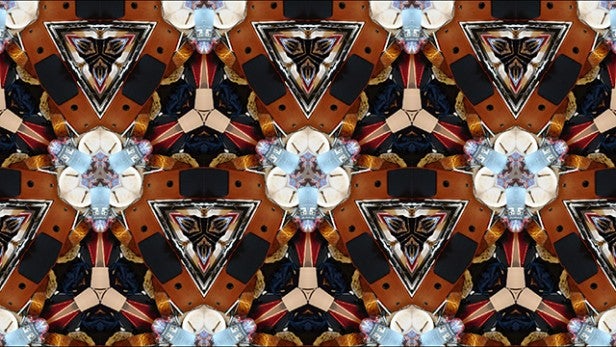 How good is the Sony Xperia Z5 camera?

The Sony Xperia Z5 has a good camera. However, its high megapixel count and the bold claims made about its abilities mean it has been somewhat overhyped.

This is not a revolutionary camera, at all. And as it does not have OIS, it’s not the most versatile camera either. Many of the voices out there calling it the best phone camera in existence seem to be those of people looking to justify buying the phone.

In reality, the camera is really just a step on from that of previous top-end Xperias, and not a particularly dramatic one either. We’re sorry for ending this one with a shrug of the shoulders, but the search for a perfect ‘next-gen’ phone camera continues.