OPINION After a few weeks of actually using one, Andy decides there may be some merit to smartwatches after all.

I’ve written about technology for what I consider quite a long time now, and anyone who does this for long enough will tell you it’s oh so easy to default to jaded cynicism at all times. In an industry so often fit to burst with empty promises, half truths, and so-called ‘game changers’ it’s the only defence to retain sanity and perspective.

Recently I’ve directed my finely tuned scepticism at smartwatches. Here, I thought, is a classic solution to a problem no one needs solving. Not quite as bad as Android and Windows hybrid laptops/tablets, admittedly, but definitely in the same cesspit. Samsung’s original Galaxy Gear, a product whose abject crapness was only outdone by its extortionate price and overexposure, was exhibit A for the prosecution. It was a pretty strong case only slightly mollified by the Gear 2 and cheaper (and more sensible) Gear 2 Neo.

But before the Galaxy Gear was (and remains) and Pebble smartwatch, the Kickstarter that arguably set off the initial smartwatch dash. And just recently I spotted one on eBay for £80 and decided I ought to (in the name of journalistic enquiry) buy one so I could slag smartwatches off with some authority.

Instead, the Pebble convinced me there’s something to this smartwatch business after all.

A rough diamond in even rougher company
And that’s despite it being a very sketchy first-gen effort. It looks… well, it looks naff; the app ecosystem is not especially useful (on iPhone at least), and the e-ink screen is small and isn’t touch sensitive, which means there’s a mess of ugly plastic buttons on the edges.

But despite all this, the Pebble works. The four to five day battery life helps, as does the knock down price, but above all it’s proved to me that simply getting push notifications to your wrist is a useful and desirable thing. That’s all the Pebble is good at and it’s enough for me to like it.

There’s something genuinely liberating about feeling your phone buzz in your pocket and knowing you don’t need to instantly take it out to find out why. Instead, I just glance at my wrist, and I quickly decide whether I really need to do anything about it. Nine times in ten I don’t, and it’s refreshing.

This is helpful in all sorts of situations. When I’m in a rush I don’t slow myself down; when I’m sat on the train I don’t have to awkwardly prise my phone from my pocket; when I’m driving I can glance at a message and keep both hands on the wheel; and I can decide whether to take a call without even looking at my phone. 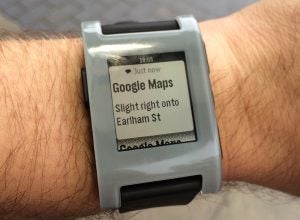 These are all small little conveniences, but they add up to a greater whole and I haven’t even mentioned my favourite benefit yet. Thanks to Google Maps’ walking directions, I can find my way around town using just the text directions pushed to my watch. No more meandering about, phone out front trying to dodge pedestrians as I go; no more worrying about advertising my expensive smartphone to would be thieves.

Despite the basic screen this works surprisingly well, so imagine how much better it could be on a watch with a proper screen that could show small segments of maps and more useful information?

That’s exactly what Android Wear looks to offer, among many other things, and my experience with the Pebble has me genuinely excited for what the Moto 360, Android Wear and the iWatch have to offer.

Next, read our guide: What is Android Wear?